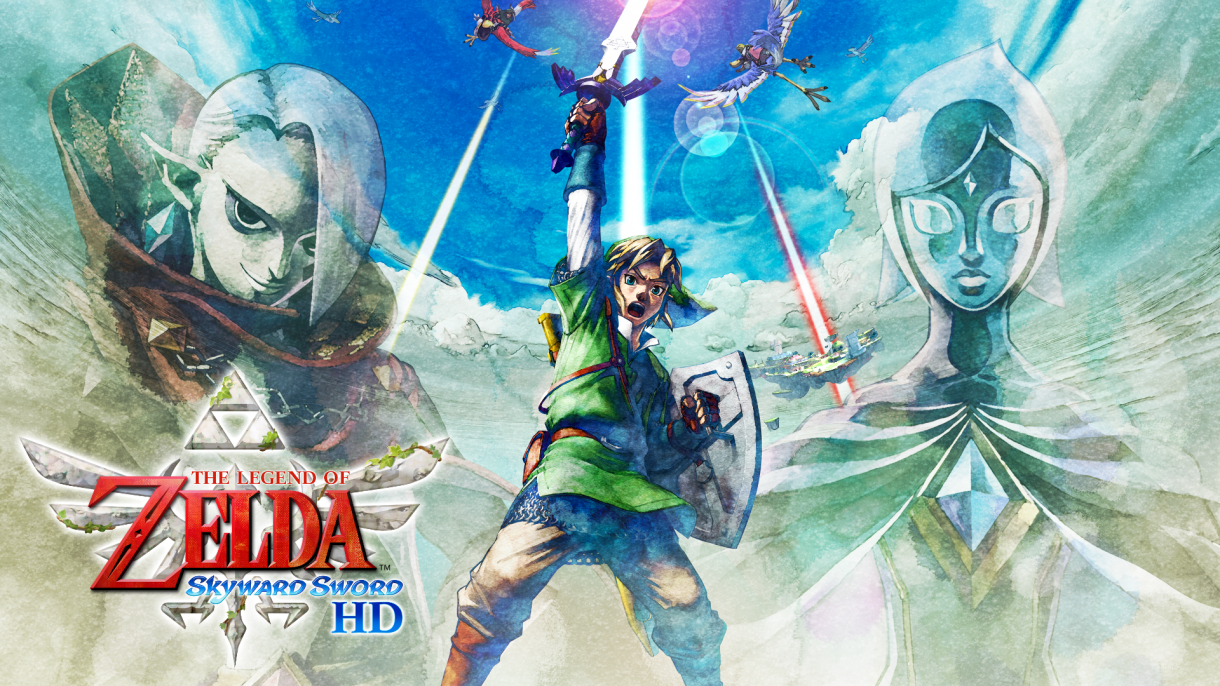 In 2011, Nintendo introduced the highly controversial official timeline which would map out the position of each Zelda game in a linear fashion. The star of this show was The Legend of Zelda: Skyward Sword, which stands out as one of the best story-telling games in the Zelda franchise. This is saying something, considering the games in this series are built upon divine foundations of lore and legend. On top of a fantastical plot, the game introduced motion controls, a stamina wheel and other items which would influence the progression of the series in the future. Ten years later, Nintendo has gifted the Zelda fanbase with the release of Skyward Sword HD; so with the knowledge that the original version boasts a stellar soundtrack, challenging dungeons and excellent story, this review will examine the changes from the base game to the remaster.

It’s important to remember that Skyward Sword itself sets a benchmark for story narrative. It was considered the first Zelda game to present a truly cinematic experience based on a solid, captivating tale that would be felt throughout the entirety of the series. In short and without detailed spoilers, this is an origins story that encompasses a great evil bent upon making the world its own while the power of good stands in opposition, and it’s told in dramatic, picturesque glory.

Pleasantly, the visuals in Skyward Sword HD are both vibrant and colorful in support of the aforementioned cinematic experience. This, partnered with the charming (if dated) pastel artstyle, improved texturization (goodbye blurred edges), and a deliberate focus on facial expressions, makes cut-scenes a delightful accompaniment to gameplay itself. The whole visual experience is only improved further considering the 1080p/60fps upgrade when docked (handheld mode coming in at 720p/60fps) as opposed to a mere 480p/30fps that was available on the Wii. This was particularly noticeable when taking in the scenery while roaming around the overworld (known as The Sky and The Surface) — the world and its inhabitants kept up with my movement as opposed to looking more grainy which we seen during the Wii era. One stickler that caused quite the stir around the original game was motion controls, which left many fans disappointed at the time. Skyward Sword HD addresses this with two types of control options, meaning the player can switch from motion controls to button only controls any time they want. However, true to the original game’s intended gimmick, Nintendo have incorporated directional sword attacks no matter your preference.

The motion controls for Skyward Sword HD provide almost the same experience as seen on the Wii version of the game. The result often leads to wildly swinging your arms around in an effort to traverse the skies with your Loftwing, or to land a perfectly positioned blow. This can be fun at times, but frustrating at others and I’ll admit that I suffered an aching elbow after the first few hours of my adventure. The aiming mechanism can also cause some issues as it tends to drag to the edge of the screen, which can be an unwelcome distraction when you’re desperately trying to utilize the Gust Bellows or the Bow during battle. One notable improvement is how the controls have been streamlined to centre more smoothly. I wasn’t forced to wave my Joy-Con into the centre of the screen, which was a necessity during the Wii era. Instead, pushing “Y” automatically done the job for me, saving quite a bit of frustration. The best part of motion-controlled gameplay is the feeling of accomplishment that comes with each perfectly executed attack though, and I began to think I’ve got what it takes to walk in Link’s shoes after all!

When switching to button only controls, prepare to be just as frustrated as you might have been with motion controls. Traditional Zelda players might habitually push “B” to slash and instead find themselves dashing across the map without purpose, which is an issue I faced a number of times that really put me off. The real annoyance comes from trying to slash your sword in the right direction though. Slashes are controlled from the right analog stick and you have to flick it precisely to get the desired attack, otherwise Link can end up taking a good beating from his enemy. However, with a bit of practice and a lot of patience, this option becomes a bearable solution for those who really couldn’t get to grips with motion controls.

With improvements on visuals and controls in order, it only makes sense that Skyward Sword HD would add the ability to fully control the camera — something that the Wii version did not allow. The player can focus on all of the charming detail available in the game’s landscape (almost) with ease. I say “almost” because if you choose to look around while in button only mode, you’re going to have to use the same joystick that you would normally use for the sword (this translates to motion controls sans the sword issue). Simply holding “L” ensures that you don’t make any unwanted attacks, while releasing it will allow you to resume slashing as normal. I faced a few minor issues with this, but once I made a habit of holding the correct buttons, the camera became a much more enjoyable feature in this title. 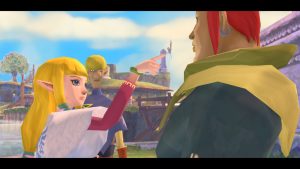 With the quality-of-life improvements taken care of, the adventure of Skyward Sword HD feels even better than before. The characters remain as whimsical and endearing as ever, with more prominent NPCs like Zelda and Groose claiming a place of their own in the hearts and minds of players the world over. Even Link’s companion Fi moves up a notch in my esteem since her helpful hints have become an optional element that I can freely ignore. Even better, those repetitive item descriptions that we were forced to bear have been tweaked so that they only appear the first time you pick something up; this was a major gripe of mine and I was elated that Nintendo decided to fix it. At the same time, speedrunners can jump for joy at the new autosave feature, optional cut-scenes and tutorials, as well faster text/skipping dialogue in the race to complete their game.

Dungeon-delving and puzzle-solving present challenges that the Zelda series has sorely missed in more recent titles, and there is some real fun to be had if you decide to throw yourself into battle, arms swinging. The Stamina Wheel returns and somehow feels less offensive than it was in the original game, which is probably down to its prominence in Breath of the Wild. The linearity of the plot and gameplay is just as engaging as it was before the series turned to an open-world narrative, which I appreciated personally. There are some heart-wrenching moments and even some panic-inducing scenes (no spoilers here!) that hit hard, showing real depth in the emotion that Skyward Sword HD can evoke, and proving that it still holds one of the most captivating plots in the legend itself.

Skyward Sword HD seems to have done everything so well up until now, but that’s because we haven’t talked about added content and sidequests. Nintendo had the perfect opportunity to include quality extras in this game such as a simple sidequest log book or some new mini-games in The Sky, but they just didn’t. While Fun Fun Island is entertaining initially, it gets old quite quickly, and don’t get me started on collecting Bugs. Collecting Gratitude Crystals is worth the effort but when you’ve been there and done that, you’re left with very little to do afterwards. You would have thought that existing Skyward Sword-themed amiibo might have offered something interesting, however they featured no functionality whatsoever, which seems like such a waste. All in all, a little extra content would have went a long way in this remaster. At the very least I expected an Easter egg for Breath of the Wild 2, but no dice (at least as far as I’ve noticed).

Finally, we’ll address the elephant in the room: the amiibo fiasco. Nintendo released an absolutely gorgeous amiibo alongside this title which featured Zelda and her Loftwing; its purpose would be to unlock fast-travel from your exact location on The Surface to The Sky, with the option of returning to that exact location when ready. This feature would have made a significant change to the in-game mechanics and understandably, fans are frustrated that it was locked behind a paywall. As if to add salt to the wound, the amiibo proved difficult to come by too. Luckily, I managed to snag my own amiibo, and can confirm that fast-travel certainly made life easier, especially when I needed to grab a quick potion during a sticky spot.

As a remaster, The Legend of Zelda: Skyward Sword HD is an excellent example of bringing a ten-year-old game into the future. The visual improvements, camera, and control options only enhance this title’s unique charm, while other quality-of-life updates make for a more streamlined gaming sequence. All things considered, this version of the game provides the experience that was intended but not quite achieved during its original release. Skyward Sword HD is a joy to behold and a must-play for those seeking the self-indulgence of a lore-heavy plot and bright, beautiful adventure.