The Best and Worst of Zelda: Trading Sequences 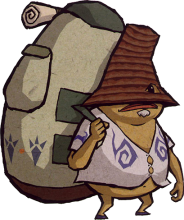 Hello readers! Brian here with the thirteenth edition of “The Best and Worst of Zelda.” This week’s topic comes from the consistent and undying requests I get for a side quests editorial, specifically by one Ballad of Zelda, so thanks for the topic idea! Don’t forget to write your ideas for next week below!

Though I won’t be writing one huge editorial involving every different side quest, breaking this massive category into manageable pieces will allow for a bit more in-depth analysis. Trading sequences have been in many Zelda games since their first appearance in Link’s Awakening, almost always as interesting methods of receiving some unnecessary, yet helpful item. With all lengthy side quests such as these, it’s tricky to keep the player interested in the side-story while still trying to engulf him/her into the game’s main plot. If done poorly, these trading sequences feel like a boring rigmarole of uselessness, but when created with just the right amount of balance, they feel like integral pieces of the game.

Strangely enough, trading sequences didn’t begin as an extra optional quest; in Link’s Awakening, it was a necessary piece of the game. That means if you wanted to beat the game, you had to go through the struggles of trading off fourteen different items all over the island. It’s a massive quest that could span the entire game; picking up the Yoshi Doll right at the beginning, and not getting the magnifying lens until the Windfish’s egg has opened. The issue with making something like this a requirement is simply that it’s not well implemented into the pacing of the game. If one were to receive the items as they moved throughout the game’s plot, it actually feels quite natural, but for those players who don’t touch it until they can take it out in one fell swoop, it’s little more than a hassle. A decent comparison would be to The Wind Waker‘s Triforce quest, where after hours of somewhat fast-paced gameplay, you’re sent to drag some rocks out of the ocean before you can fight Ganondorf. In both cases, the pacing and build-up is absolutely ruined. Personally, I’m a fan of this game’s trading sequence, but I don’t like the fact that it is required to finish the game. Other than that, the only thing I disliked was the trade for the necklace, in which the player had to go under a bridge by diving into it (a completely unexplained system). That’s a prime example of poor item placement. 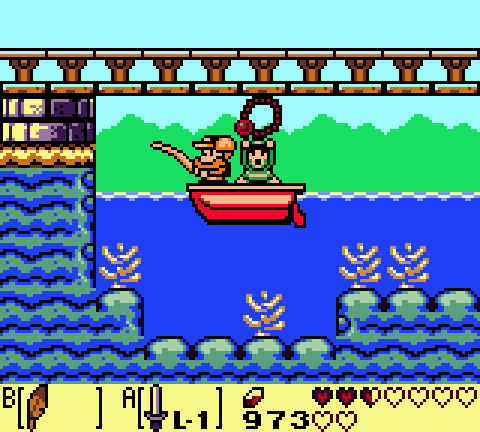 But I believe Nintendo learned well from its mistakes, and has since never forced a trading sequence upon the player. After Link’s Awakening, the term took on a completely different meaning. The next game in the series, Ocarina of Time, had a large-scaled trade that proved to be extremely popular among fans: the Biggoron Sword quest. Everybody loves the Biggoron sword! It deals wild damage, looks ridiculously huge, and has a really interesting side quest attached to it. The interesting piece of this quest lies in the characters, certainly much more so than the items. We are reintroduced to the Cucco lady’s brother, who is creepier than ever, we meet the lovable Biggoron, and then we’re left trading with many characters we had already come to know in the past. Even King Zora has something to give you! This quest also showed a level of difficulty, with first-time players most definitely having to try the timed challenges at least twice to get it correctly. The timing also made the trading more fast-paced, and actually made something naturally dull into an exciting piece of the game. 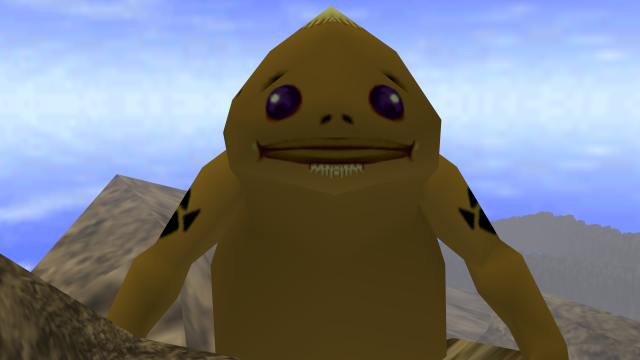 A very interesting semi-combination of the two is the trading sequence from Oracle of Ages and Oracle of Seasons. In most ways, it functions just like the one in Link’s Awakening, where throughout the game there are small items that you give to random NPCs in the games. Despite it being of the same basic design, these two games provide a sequence that prevails over that of Link’s Awakening in a few key ways. First of all, it’s not required! If you, as the player, would rather not spend your time making computer-people happy, it’s completely your choice. This is a lesson learned from Ocarina of Time; not all players love straying from the plot, don’t force them to. But for those of you who, like myself, like to experience every little detail the game has to offer, this quest really is a necessity. This is a quality side quest, no doubt about it. Well paced in a manner similar to Link’s Awakening, where if one were to begin the trading quest upon starting the game and then continue it as he/she made progress, it feels like a fluid bit of gameplay. The quest is also more, for lack of a better term, user friendly. It’s pretty simple to figure out who needs which item, even though the game never specifically tells you. Almost tricks you into thinking you’re clever. The reward in both games is the Noble Sword, an item which deals twice the damage of the regular sword. Hmmm… Sounds familiar. No, it’s not the Biggoron Sword, as that item is also available in Linked Games, but it generally serves the same purpose. These games perfect the trading sequence, and in my opinion, there has never been a better one in the series.

Last, and sadly, least, is the simply strange trading quest from The Wind Waker. Don’t get me wrong, I love the game. I love every little nook and cranny of that game, and I will never think poorly of it, but this side quest… Uch, this side quest is awful. Receiving the Magic Armor from this process is little more than a slight detour, but receiving the ultimate goal, a Piece of Heart, is a time-consuming, overly expensive rip-off. Honestly, it is ridiculous. I have no idea who thought that a thirteen-step, 755-rupee Piece of Heart was a decent idea, but he was absolutely wrong. Pacing? No. Interest? None. Reward? Not nearly good enough. I will defend The Wind Waker as my favorite video game until the day I die, but this very well may be the worst thing in the game.

Well, that’s all for this week! Make sure to check back every Tuesday at 11:00 AM Central Time for more! Put your ideas for next week in the comments below, and as always, thanks for reading!