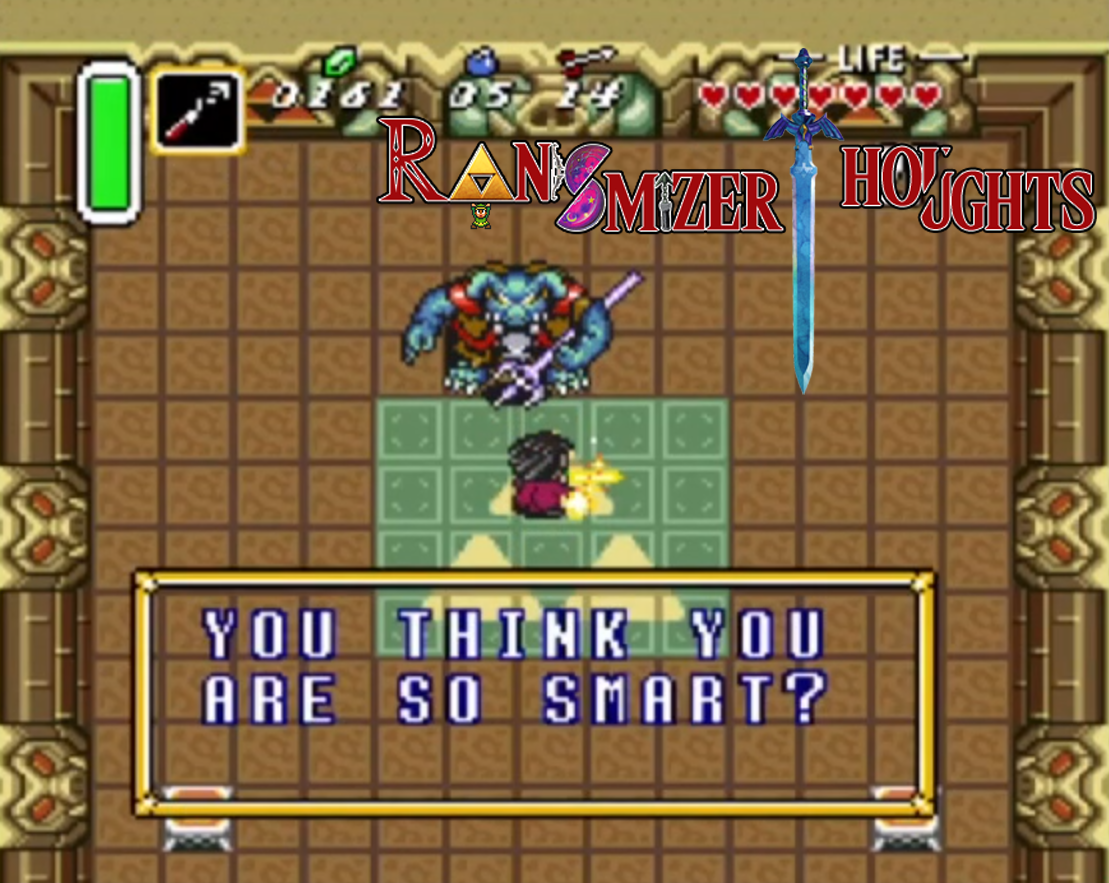 Welcome to Randomizer Thoughts, where we dig deep into the world of Legend of Zelda Randomizers. I am Doug Kwiecinski, your host through this journey. With this column, I aim to do three things: Introduce the idea of the various Zelda Randomizers, highlight several notable leagues, and offer tips and strategies for getting started with a randomized game.

For the better part of the last year, I have run countless seeds in A Link to the Past Randomizer, while dabbling in several other randomizers for various games, Zelda or otherwise. Call it part nostalgia, part competitive itch. Each seed feels like playing the game for the first time, and each game is designed to be raced, either against others or your own skill.

What is a Randomizer?

In truth, there is a ton that goes into a randomizer. Luckily, we have a full post ready for you to look at! In short, a randomizer takes assets of the game and shuffles them. In the case of a Zelda game, that could be as simple as only shuffling treasures. It could also be as complex as changing where an overworld entrance takes you. For example, in A Link to the Past, you could be walking into Sick Kid’s home and find yourself in Thieves’ Town.

There are dozens of games that offer randomized settings. Nearly every Zelda game has an associated randomizer, as well as Final Fantasy, Castlevania, and Metroid games. Each one offers a different sort of challenge, and provides variety for nearly all genres. The challenge seems daunting at first, but with each game offering a brand new experience, giving old classic a sense of new life.

A League of Their Own 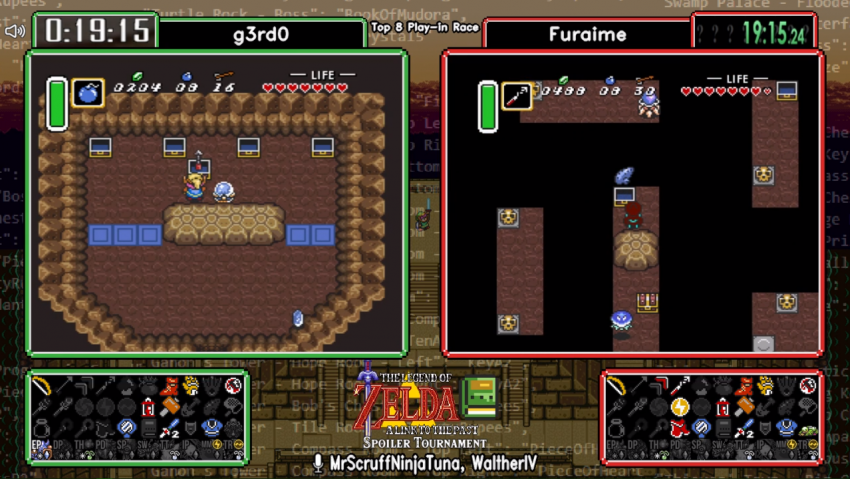 One of the big draws to the randomizer community are competitive races. As a mix of skill and routing, it’s a great way to offer some friendly competition. This has also led to the formation of several Zelda Randomizer leagues, the most popular focusing on A Link to the Past and Ocarina of Time.

Currently running on the SpeedGaming Twitch channel is a Link to the Past Randomizer Spoiler Log Tournament. Now, that’s a lot of words for someone that might be unfamiliar with the concept. In short, each seed is generated with a spoiler log. This log lists each treasure and the location where it’s located. Before the race, each participant gets 15 minutes to study the log and create their own route. The result is a show of who can plan and execute an ideal route better.

The afternoon of July 17, there was a play-in game for the last spot in a top 8 bracket. At the end of the head-to-head portion of the league, both g3rd0 and Fruaime ended with a 5-2 record, scoring 21 points. Their single elimination play-in resulted in a win for g3rd0, and the final stop in the top 8. The match started with both runners getting their Pegasus Boots within the first minute. From that point, their routes immediately diverted.

While Furaime went item hunting early, g3rd0 took the opportunity to clear Eastern Palace. This gave g3rd0 a required crystal, and an advantage he held through the rest of the race. In the end, g3rd0 won the race with a time of 58:41, while Furaime elected to forfeit. For all the fine details, you can find their race here.

Tricks of the Trade

Much like Zelda speedrunning, running a Zelda Randomizer becomes easier with proper routing and knowing a few tricks. Being part of this growing community, I would love to see more people give it a try. Since much of this post has been focused on A Link to the Past, we’ll start with a tip in that game.

The first few checks (opened treasures) can have a major impact on how you progress the rest of the way. Unlike vanilla A Link to the Past, the randomizer opens the world up to you from the beginning. When you start the game, you can elect to spawn in Link’s house or the Sanctuary.

In my runs, I will usually start at Link’s house, grabbing the first treasure in the room. From there, I make my way north to Hyrule Castle where you originally find your uncle. You can grab a treasure from your uncle and the chest in the next room. This is where your first major choice comes into play. If I have a weapon at this point (i.e.: sword or hammer), I will get the treasures in the castle basement. If I don’t have a weapon, or I’ve cleared the basement, I will save & quit, then respawn at the Sanctuary.

From the Sanctuary, head east to grab the treasures in the Lost Woods, and all of Kakariko Village. This route gives you about 12 to 20 treasures within the first few minutes of the game. Beyond this, the game requires knowledge of what items you need to complete each dungeon. Visit treasure-heavy locations, build your arsenal, then slay the pig!

Beyond that, I would be happy to act as a resource for any of you, and can be reached on Twitter or Twitch.

Doug is an editor for Zelda Dungeon. When he’s not writing, he’s busy as a professional coffee roaster and a Twitch streamer. He has also lost countless hours in A Link to the Past Randomizer.

Comments
Sorted Under: A Link to the Past, Randomizer Thoughts, Zelda Fan Content
Tagged With: No tags were found for this entry.