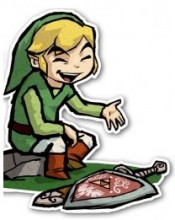 The Zelda fanbase is constantly talking about it; the creation of a movie or series based on our favorite franchise is a hotly debated topic. Over twenty-five years of popularity, and the closest thing we’ve had was an infamously terrible cartoon (although this isn’t everyone’s opinion). Recently, game director Eiji Aonuma made a statement saying that a Zelda movie would require a 3DS to view, if one were ever made, and it seems we’re getting pretty close. Nintendo announced today that through the free 3DS application Nintendo Video, fans will be able to view animated shorts following the adventures of everybody’s favorite green-hatted hero!

Jump inside to read all about the videos!

The series is entitled The Legend of Zelda: The Misadventures of Link, and is based off of the newest Zelda title, The Wind Waker HD. A fitting game, seeing as it has frequently been praised as a “playable cartoon.” These shorts, meant to be humorous, will be available for a limited time on Nintendo Video and may not be saved permanently. It is said that they show Link “in a new and hysterical light,” and will be released alongside a series of shorts based on the extremely popular Pikmin 3.

Personally, I’m excited for this. The Wind Waker is the perfect game with which to finally attempt a decent cartoon, and with the extensive amount of content in the game, they have quite a large canvas to work with. The only thing that worries me is the humor, which I only hope strays from the silly, slapstick nature that the first Zelda cartoon had.

So what do you think? Will you be watching these shorts? What would you like to see in them? Are you happy with the game choice? Leave your answers and more below!