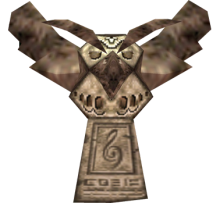 A new warping glitch in Majora’s Mask has been found by a YouTuber named Indextic. The glitch essentially allows players to warp to any owl statue without having to activate any of them. It is rather simple to execute, and while different versions will have to be tested for whether the glitch works on them, it could prove very helpful in the already extremely detailed speedruns of Majora’s Mask.

Hit the jump to see the glitch in action.

I find speedrunning very interesting, as I know how much work is put into them and how many little tricks are exploited to break a game in all the coolest ways. More to the point, while millions of glitches are already used to rush through games like Majora’s Mask, things like this are still discovered all the time. This one specifically could be a big find, though. Wrong-warp glitches, where you end up warping to an entirely different place than the game intended, are often few and far between, or just difficult to execute. This trick, which may or may not be a wrong-warp exactly, is rather easy to perform, and I look forward to seeing what is done with it.

What do you guys think? Will you try playing around with the glitch? Let us know in the comments!