Posted on January 09 2016 by Alexis Anderson 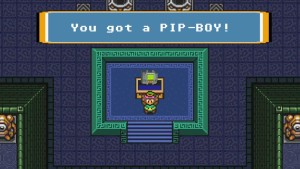 What if instead of a fairy, Link had a Pip-Boy? Or if, rather than hearing Koji Kondo’s arrangements, players were treated to Three Dogs’ Galaxy News Radio? The comedic minds over at Dorkly asked themselves the same questions and have turned their answers into a hilarious fifty second parody of A Link to the Past intertwined with Fallout tropes. With a little bit of lock-picking, targeted combat, and a classic Fallout drink, life in Hyrule sure has changed for Link.

Watch Dorkly’s video after the jump to see the Legend of Zelda’s Hyrule meet Fallout’s Wasteland!

This short video was cleverly constructed and jam packed with well known Fallout assets; I don’t play Fallout myself (though I’ve watched my brother play a good amount), and I still found this really entertaining and funny. Dorkly never fails to deliver quality gaming comedy, to see more of its Zelda content head here, or more of its Fallout content over here.

So what did you think of this crossover? Any big Fallout references missed that you feel should’ve been included? There’s also one reference I didn’t get, anyone know what that monster from 0:15 is? Let me know in the comments!

Comments
Sorted Under: A Link to the Past
Tagged With: fallout, funny, Nuka Cola. Wasteland, parody, Pip-Boy, Video, Zelda