These two pieces wrap up our jaunt through the various towns around Breath of the Wild’s version of Hyrule. This final set brings us into the far reaches of the Gerudo Desert. These strong, nomadic people built a solid town to combat the scorching winds of their homeland.

Yasuaki Iwata gives us one more set of great pieces. Tracks 22 and 23, “Gerudo Town (Day)” and “Gerudo Town (Night),” respectively, bring the heat and sand of Gerudo Town to life.

These pieces have a few interesting instruments weaving between each other. Some percussive instruments in the “Day” portion include a chocked triangle and a snare drum. There are also a couple different kinds of wooden flutes, as well as an oboe near the end. The “Night” variation instead favors synthesizers and the piano, as well as making sure to get some beautiful harp runs in here and there.

The two versions, however, are unified by one instrument: the sitar. 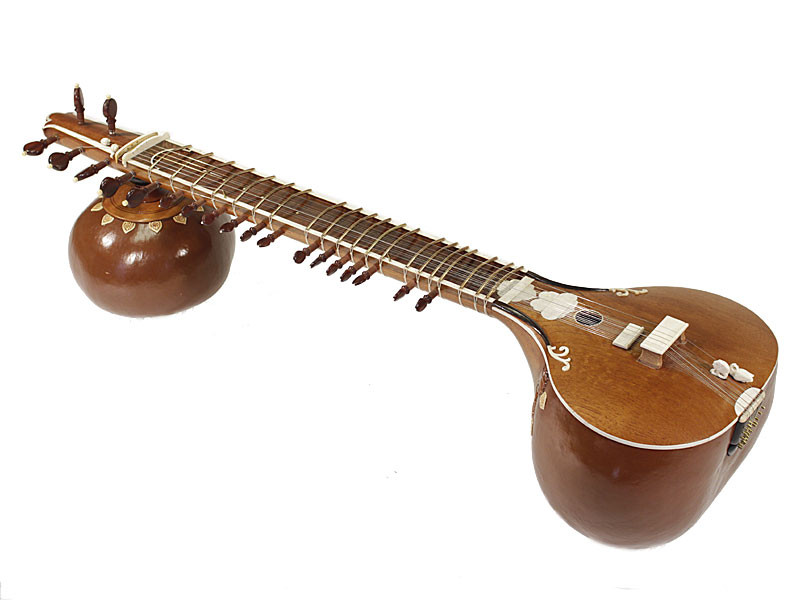 The sitar is indicative of Gerudo culture in Breath of the Wild. This ting-ey instrument graces the higher registers in both themes. The instrument is played with the headstock either resting on the player’s knee, or on an upturned, often ornamented bowl (as pictured above). This is so the instrument can be laid flat. It can also be played turned upright, like one may expect from an upright bass.

The “Day” variation of this theme is quite inviting. The rhythmic opening Ab chord sets a firm groundwork for the town, just like the Gerudo themselves have set a good foundation for their high walls. Soon enough, the first bout of triplets is introduced, which becomes a rhythmic motif, as well as framing the leitmotif:

As the theme goes on, you begin to hear subtle hints of other instruments, and new themes and harmonies, much like exploring Gerudo Town and discovering things like the bar and the secret shop.

As we move into the “Night” of Gerudo Town, the sounds become more ethereal, as they really dig into the calmness of the Town. During this time, even the Gerudo Chieftain Riju heads to bed in this soothing piece. The addition of the harp at the end of each section sends home the message of “lullaby” even more.

The above bars of Ab and Gb are repeated for the majority of the song, shifting only slightly to Eb and Db. All of the above are played similarly, in root position without the third. (Example: the first chord, Ab; the root is Ab, the third is three away from the root, so C [except there is no C present], and the fifth above is Eb).

During “Night” though, we can see the harmony becomes much more lively, which is quite unusual thus far with contrasting the village themes.

Here we can see that the harmony has become more complex. Not only is the frequency of notes increasing, but so is the number of chords. Instead of simply shifting back and forth between bars, we now shift from B to C in measure 1, then from C to A to E in measure 2. I think this is an interesting representation of the way Gerudo Town becomes more interesting as the night goes on.

After listening to all of the village themes, I have come to decide that the Gerudo Town variations are my favorite. I love the way these themes contrast each other and really give a feel for the town as a moving character. The “Night” version in particular is quite nice. I love the way the harp adds another layer to the sitar and the shift in tempo helps to bring out some of the more key elements of the piece. The music itself is also interesting, complex, and compelling with its harmonies, instrumentation, and feel. The tune is catchy and was actually a joy to listen to on loop while writing this very post! All in all, I wouldn’t mind taking a trip to Gerudo Town for its culture-infused music.

How did you like these themes? Was one preferable to the other? Which one was it, and why did you like it better than the other? Is Gerudo Town’s theme your favorite, like me, or do you like one better? Let me know your thoughts in the comments below!

Comments
Sorted Under: Breath of the Wild, Games, Musical Musings, Original Content, Slider
Tagged With: No tags were found for this entry.