Posted on April 03 2013 by Dathen Boccabella 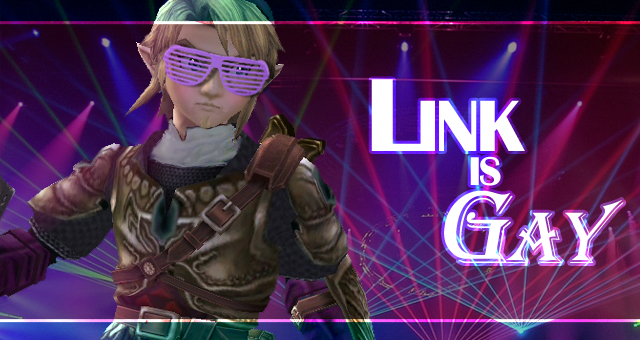 (This article was originally released in 2009, and has been re-edited for “Classic” month, which we will be running all of April 2013. Every day we will bring you at least one, if not a few, classic articles from the olden days of Zelda Informer. Many pieces may feel a tad outdated since none of them will really include anything per Skyward Sword, though we will make sure to make appropriate changes due to new things discovered in Hyrule Historia. The goal is to preserve, as much as possible, the original text while presenting them to an all new audience who likely wasn’t around or missed these great articles entirely the first time. That being said, enjoy!)

There are so many mysteries in the Zelda universe. Some of them we will never have the answers to, but others, once you are aware of them, are starkly obvious. The sexuality of our hero, Link, is one of the easy questions to answer. Link is homosexual! It is blatantly obvious, once you assess the evidence. This theory goes way back. Quality Zelda theorists from the quality theorizing section of the quality Zelda fan site Zelda Universe have been formulating this theory for years. We all know that something’s got merit if it comes from Zelda Universe theorizing right? Right?

Link’s feminine facial features aside, there is much more depth to his sexual orientation. Research suggests that homosexual males gravitate towards females as close friends in their childhood, moreso than male friends. So Link, that’s why you’re close to Saria and Illia right? I can’t think of any other reason there might be for that, except, perhaps… maybe… romantic interests? Nah, that can’t be right. He had plenty of chances, but Link was always cold to them. He never returned anything or took the hint.

Take Saria for instance. There they were, alone on the bridge in The Lost Woods. Saria was pouring her heart out and ended up giving Link one of her most precious possessions in the Fairy Ocarina. Can’t Link take the hint that she likes him? Instead he just runs away. Granted, she may be 400 years old and always look ten, but to Link she’s the perfect age. What a cute little Kokiri couple they’d be. Let’s not even get into the amount of almost-moments Link and Illia had in Twilight Princess. Or the amount of times that Link has been the big tough hero who saved Hyrule and the Princess, but then did nothing. Is there a better chance to pick up than after saving the world and their life? Didn’t think so. Link is just not interested. It’s not hard to fathom why.

Every time some female drops him a hint that they like him, he runs. He avoids Princess Ruto – he even jumps off a tree into a fountain to get away from her. He was engaged to her with the Zora’s Sapphire, but it is slightly understandable he ran though, because that whole relationship was rather fishy. But what about the others? There’s Nabooru promising Link suspicious favours and later calling him handsome, and still Link does nothing. Can’t he just say something? Why does he have to be so cold? Why can’t he just tell them that he’s gay? Like poor Midna. If she’d known that all along, then her farewell wouldn’t have been so hard. No, instead Link had to lead her on. He must be one of the few emotionless gays out there. Maron’s another prime example. So many chances, so many hints, but he’s just not interested. Even Talon sees the potential chemistry between the two. Link doesn’t though because he doesn’t consider it an option.

Yeah, Link’s mind may be focused on saving Hyrule, but what about when everything is peaceful? He’s just not interested. Instead he lives for other moments. Moments like those in the Chamber of Sages with Rauru. Now I don’t really want to imagine what happened in those seven years, but I can tell you this: clothes don’t change themselves. Link isn’t concerned about that though. Sure, he is surprised that seven years have passed, but not that Rauru has been undressing him. Then for all of the females that Link avoids, he has no hesitation getting some intimate hugs from Darunia – some sworn brothers stuff there. Then there’s Sheik. Link shows an intrigue towards Sheik because he is one handsome man; it’s just that something doesn’t seem quite right about him for Link. Don’t ever doubt gay instinct my friends.

I’m not petty, so I won’t use Link’s piercings, or his green dress, or his really tight leggings to assess his sexuality. Besides, it’s not really necessary. In 2006 Link was named the Hottest Video Game Character by monthly gay and lesbian culture magazine ‘Out’. What more do you need? If you have such a following, such support, from the gay community you have to be gay. Just look at Randy Orton!

Zelda, Tetra, Saria, Ruto, Illia, Nabooru… the list goes on. It’s understandable – who wouldn’t want Link. He just doesn’t want them. I just wish he wasn’t shy about it. Why does he have to hold all of his emotions inside? Let them out Link, let them out. Be who you are. Don’t be what society demands you should be. Don’t conform. The poor boy is so confused. He tries his hardest to avoid all of these girls, but on the very slightest of occasions he lets himself go, not to arouse suspicion. Like when he holds hands with Zelda in Spirit Tracks or lets Zelda from The Adventure of Link do stuff to him behind the curtain. Experimentation is all a part of finding your sexuality buddy, but don’t do anything you don’t want to.

There is quite a funny side to this. I can already read the thoughts of many of you readers. Some of you won’t have made it this far before commenting, others will be waiting for this to end so that you can comment. You want to express your disgust for such a notion, for such a pointless and ridiculous piece of journalism. But that’s the point exactly. I make a weak case that Link is gay, and you’re all riled up to fire back your reasons that he isn’t. You want to defend Link’s apparent straight orientation, but I hope that in itself reveals to you what I want you to take away from this piece.

It doesn’t matter if Link is gay, or straight, or bi, or a hermaphrodite, or a eunuch even. All that matters is the gaming experiences that he gives us as players. We shouldn’t expect Link to be straight, just like we shouldn’t expect everyone we know to have the same sexual orientation as us, or what society apparently says they should have. It wouldn’t surprise me if some people would say “I would never play another Zelda game again if Link was gay”. It’s immature, just like it is to judge by sexuality.

Instead, if Link really was gay it should help people to see that such preferences don’t change people. Everyone is still special in their own ways. People like Freddy Mercury and Sir Ian MacKellan are icons to many of us, and have helped many people to become more accepting of the gay community. If Nintendo had, or ever made, a decision for Link to be decisively gay, then I would hope he would have a similar influence on those who are fans of the Zelda series. It’s like the school-yard cliché that says males with their right ear pierced are homosexual. Link is one figure I know that has abolished that stereotype in many teenagers and children. Link has a strong influence over youth, and his sexuality would too. Not in influencing preferences, but in teaching acceptance and respect of differences.

The truth of the matter is that Link is gay, but he’s also straight. He’s everything at the same time. Always Link has been a shell for the player to fill with themselves, and the reason he responds as he does to the female characters around him is because it is up to you to complete the story. Link’s romantic interests are your decision. That is interactive entertainment for you. You make the choices for Link. He’s gay if you want him to be, and the point of that, the point of all of this is as follows: don’t judge by sexuality. It doesn’t change the person that Link is, or what he has done, and that goes for everyone else as well.

This article was inspired by recent news reports of an increase in school and workplace based bullying towards homosexuals, amongst teenagers especially. No offense was, or is, intended towards anybody and their sexual preferences. I only hope this article inspires people to see that judgement and the lesser treatment of others due to sexuality is unacceptable.

All offense was, however, intended towards Zelda Universe. Okay, so that’s not true. You’re a quality site, with quality theorizing – it’s just like I said!