Link is a Tree

Posted on April 01 2013 by Dathen Boccabella 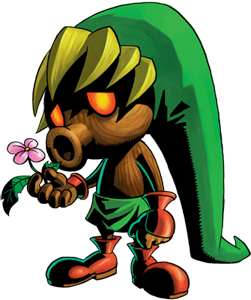 Disclaimer: The following article is not just a theory article reflecting the opinions of the author alone, but rather a factual article on the opinions held by everyone who’s sane. This article is absolute, proven and guaranteed truth. The author takes no responsibility if you’re too closed minded to see the truths of this article. With that said, enjoy the read.

It’s almost been fifteen years now since I first got into The Legend of Zelda series, and what a time it has been. The Zelda

franchise has provided me with weeks, even months, of entertainment. It

inspiration amongst many other things. However, there has always been

something that I couldn’t quite place about the series. For all these

years as I’ve sat there playing, something hasn’t seemed quite right.

Something has seemed a tad out of place. Finally I’ve come to the

understanding and appreciation for the series has opened wide open for

me. I have discovered that the protagonist of the series is not human.

Not even Hylian. Link is actually a tree.

The Hero of Time is mistakenly referred to as a Hylian because, conveniently, that’s what the Deku Tree sprout tells him he is. However, it’s pretty obvious that that’s just a cover. The Sprout tells Link that his mother fled into Kokiri Forest, but that’s just nonsense. She wouldn’t have made it to the Deku Tree without becoming a Skull Kid or a Stalfos or something. The truth is, the Deku Tree is actually Link’s father. As one of the Kokiri girls tells Link: “the Deku Tree is our father, the forest guardian, and he gave life to all of us Kokiri.” A simple look at The Wind Waker reveals that the Kokiri, well the Koroks, are nothing but little trees that jiggle as they walk around. They just have the ability of taking on a human form – which is exactly what Link does. Beneath it all, he’s nothing more than a mere tree. 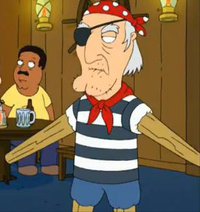 It makes me think of Family Guy actually. You know, the scrawny pirate like guy with the eyepatch. The “me father was a tree” guy. The difference is: he’s cool. Link, however, is an emotionless stump. But it makes sense why now. Trees do not have brains. Trees do not feel emotions. Trees are nothing more than trees. Trees cannot talk. Trees cannot become attached to others. Link has never been some empty shell of personality that the player is supposed to project themselves onto – he’s just been a tree. Nothing more, nothing less.

Take a look at Majora’s Mask even. Why is it that everyone assumes that the Skull Kid turns Link into a Deku Scrub with some sort of curse? Quite obviously the Skull Kid, with Majora’s powers, can see Link for who he is. He can see that Link is a tree and he simply returns Link into his real and natural form. I mean, when you’re being pursued by some tree that’s pretending to be a human do you really need to get all powerful with some almighty curse? No. You just reveal him for the tree he is and watch him sit there wallowing in his own sap.

Upon realizing that Link is a tree, the mystery of the heroic green tunic is revealed. It is a part of the process of photosynthesis. In his human form Link is lacking in his green foliage, so he uses his tunic – both for camouflage and photosynthesis. For those who don’t know, photosynthesis is the process that plants use to convert carbon dioxide into organic compounds, such as sugar, that serve as their food source. To do this the plants use the greenness of their leaves to absorb sunlight, which they use as energy for the conversion process. Now do you understand why Link never eats? He’s always running around absorbing sunlight in his tunic and creating his own sugars. It’s only natural after all. This also explains why Link never needs to go to the bathroom, or why he never sleeps. Such things aren’t a part of the daily routine of a tree; however, photosynthesis is.

Mind you, Link is one damn special tree. Photosynthesis is necessary to maintain life on earth, and the heroic Link is also necessary to maintain life on earth – otherwise the world would fall into the death and darkness of Ganondorf. Link uses his photosynthetic abilities to attack his enemies. Notable are darknuts and iron knuckles (aka lumberjacks) Ganon sends after Link to cut him down. In Twilight Princess, Link is taught a powerful photosynthetic hidden skill from the Hero’s Spirit that greatly adds to his strength. 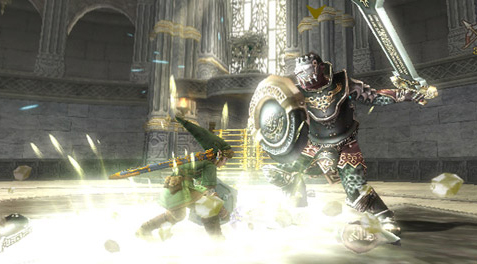 Link using photosynthesis on a lumberjack.

People often wonder what the connection is between the Links of the different Zelda games, seen as it isn’t blood descent. Some people propose idiotic concepts about destiny and a heroic wolf spirit, when the simple answer is that Link is always a tree. The heroes are Ents, in the words of you Tolkienites. Thus, hints to the tree like nature of our hero litter many games in the franchise. Even Oracle of Ages contains a hint. Link saves the Maku tree, who in turn falls in love with him. Obviously trees only fall in love with other trees. Nintendo isn’t going to encourage bestiality and inter-species romance. I mean they’ve never suggested Zoras and Hylians should copulate, and it would be absurd, even offensive, to have a tree loving a human. That’s just too sappy.

Hence, by falling in love with Link, the Maku tree is actually falling in love with another tree. Believe me; trees know their own kind when they see one. The thing is, us humans have a hard time seeing trees when they see them. That’s why it has taken us so long as the Zelda community to come to the realization that I have today. The Hero of Time is a tree. The Hero of Twilight is a Tree. The Hero of Wind is a Tree. That’s why he sinks when he swims for too long and absorbs too much water into his trunk. Every single Link there has ever been and ever will be is a tree. Finally, the mystery of Zelda is solved.

I must acknowledge Uncyclopedia, as the source upon which this article was based. They provided both the inspiration and concepts used in this article. Content was adapted with permission under the creative commons license.