Posted on November 03 2013 by ralphpotato 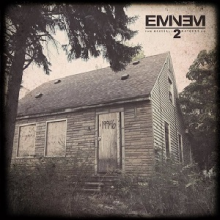 A few days ahead of its intended release, Eminem’s new album, The Marshall Mathers LP2 was leaked to the Internet, and in one of the songs Eminem mentions Zelda. It’s in the context of video games and technology, but a reference nonetheless.

It’s great to see Zelda appear in other areas of pop culture, not just among the video game community. It tells us that despite the arguments we have, as passionate Zelda fans, the series is still running strong. Over a quarter of a century in existence, and The Legend of Zelda still shines out among the best and the most widely-known because in the end, it’s a fantastic series.

Even if you aren’t an Eminem fan, hit the jump and check out the few seconds where Zelda is mentioned in his new song, “So Far”!

Jump to the 2:18 mark to hear where Zelda is mentioned.

“Be an expert at computers?
I’d rather be an encyclopedia Britanniaca, hell with a PlayStation
I’m still on my first manual from Zelda
Nintendo, bitch, run, jump, punch, stab, and I melt the
Mozzarella on my spaghetti”

Profanity aside, they’re interesting lyrics. The manual to The Legend of Zelda was definitely a thing of beauty, especially considering now where manuals are simply the health and safety information, combined maybe with a diagram for the default control scheme. It was colorful, descriptive, and exciting. If you haven’t seen it before, check it out here.

What did you think? Are any of you Eminem fans? Let us know in the comments!