Is The Legend of Zelda Sexist?

Posted on April 17 2013 by Dathen Boccabella

Is the Legend of Zelda degrading to women? Does its interpretation of the classic fairytale formula lead to nothing more than tale after tale of helpless damsels in distress? Does its portrayal of Link as the hero send the message that males are superior and females are useless? Sadly, to some cynics, the answer to all three is “yes”.

On some occasions these cynics have said that The Legend of Zelda is offensive to woman’s rights. Let us, however, take a different, more rational perspective on the issue. From every angle that I look at the series from, not only do I disagree with those claiming Zelda is sexist, but I have to argue the exact opposite. Zelda isn’t just not sexist, it really is inspiring to feminism. At least, it should be if you interpret it correctly.

My argument is simple: when it comes to characters of authority and respect within the series, more often than not, they are female. The Legend of Zelda is a series centered on the mythology of the Triforce – a scared relic of the Gods. Or, as I should say, the three Golden Goddesses. The three most supreme figures in Zelda simultaneously represent feminism and power.

Taking a step down from gods to the people, we can see a similar trend. In Ocarina of Time there are seven sages, of which five are female. The equivalents – the maidens – in A Link to the Past and Four Swords Adventures are also, of course, young females. Now, while many say this does nothing but further the number of helpless damsels for Link to rescue, I disagree.

As Darunia shows, males were at just as much risk as the females. The point is that the female characters held positions of responsibility, respect and authority. Their gender is irrelevant in regards to their kidnapping; it was just a case of Nintendo being swayed by the conventions of storytelling. The maidens and sages, despite being “kidnapped by the baddie”, are by all means ladies to look up to.

I mean, the sages in Ocarina of Time didn’t go easily. Ruto, Impa and Nabooru at the least, we’re all captured as they fought valiantly against an evil that they couldn’t overcome alone. Granted, Link does overcome that very evil, but never alone. He fights together with the sages; with the maidens.

Speaking of females to “look up to”; none come close to the titular character: Princess Zelda. We’re talking about a series where the character it is named after is female. How can it be sexist? Zelda is a role model. In many titles she is a righteous Princess, containing a sacred power within her, and often sensing when evil approaches. Never doubt a woman’s instincts. In other titles she is portrayed as the youthful, ruling Princess – with power, authority and grave responsibility. 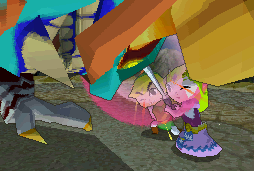 Zelda fights beside Link, helping him deal the final blow to Malladus.

Those claiming Zelda is sexist will state that Zelda is only ever in a position of power to demonstrate that females can’t make appropriate decisions. They make mention of Zelda surrendering in Twilight Princess, which doesn’t even seem like a bad choice in my opinion. It’s more of a rational choice between surrendering and dying for her whole kingdom. A worse decision is in Ocarina of Time where Zelda leads Link to practically hand the Triforce to Ganon. But I don’t see mistakes as this as sexist at all. They are simply an expression of what it is to be human.

The allocation of the Triforce is another aspect in support of feminism. In a subtle way, it makes a statement about women. The males may possess the power and the courage, but females tend to possess more wisdom. Of course, such a broad statement is not to say that females lack power and courage – although Power in the series is absolute power, and courage pertains to the way of the hero – but rather refers to the tendency for females to be more thoughtful, not as hasty to rash action, and overall more wise than males.

Of course, that’s generalizing statistical findings and isn’t reflected in every individual case, because Zelda shows plenty of courage and power throughout the series. Although she is portraying “beauty” in the series, rarely does she merely swoon and thank Link for rescuing her, but often gets straight into fighting side by side with him. In Ocarina of Time she uses her genius to become Sheik and help Link to overthrow Ganon. She is only held back in the final fight due to the flames and Link making her stay in safety.

In The Wind Waker and Twilight Princess Zelda uses the Sacred Light Arrows in the final fights, as Link battles sword to sword. She is right there beside him, but never moreso than she was in Spirit Tracks. Fighting beside Link for the whole game, she again used the Light Arrows, but also weakened Malladus significantly – with her voice mind you – and helped Link deal the final blow.

Now, I won’t ignore what happens in Zelda II: The Adventure of Link, or the fairly generic fairytale appearance of Zelda in the original. I will however, draw your attention to how the series has progressed. Instead of generic “rescue the princess” stories, the Legend of Zelda has expanded as the gaming medium has allowed for it, and for decades its story has been nothing but uplifting and supporting of feminism. In fact, as I edit this now the latest Iwata Asks has just been posted, talking to the female staff of Nintendo who have worked on the Zelda series.

In many ways, just using a female means something is sexist in the cynics mind. It’s like referring to someone as “the black guy”. That’s apparently offensive, and yet “that blonde guy” isn’t. Really, almost all claims of sexism in such prominent mediums of entertainment are unfounded. People used to say that it was sexist that there were no female video-game protagonists. Then we got Samus, and people complained that she’s just a stereotype, creating unrealistic body-image ideals. Then when Nintendo gives her a personality and develops her character, then people say that she’s degrading to females for having depth. Next up on the agenda: why male Zelda fans are depressed because they’re not as attractive as Link. Really? Fact: Nintendo doesn’t cause body-image issues in children.

There’s no pleasing the cynics though, but it doesn’t really matter. We know that The Legend of Zelda isn’t sexist; it’s the exact opposite. It isn’t gender discriminate by any means. In fact, if you’re female and you don’t draw at least some inspiration from the Legend of Zelda and its portrayal of positive female role-models, then you’re not paying attention. If only the media and critics focused on real issues instead of making non-issues out of well-meaning videogames. Especially when compared to the many non-Nintendo titles out there where females don’t seem to grasp the concept of “clothing”. To call Zelda sexist is an insult.