Inspired By Zelda: The Challenging Freedom of Dark Souls 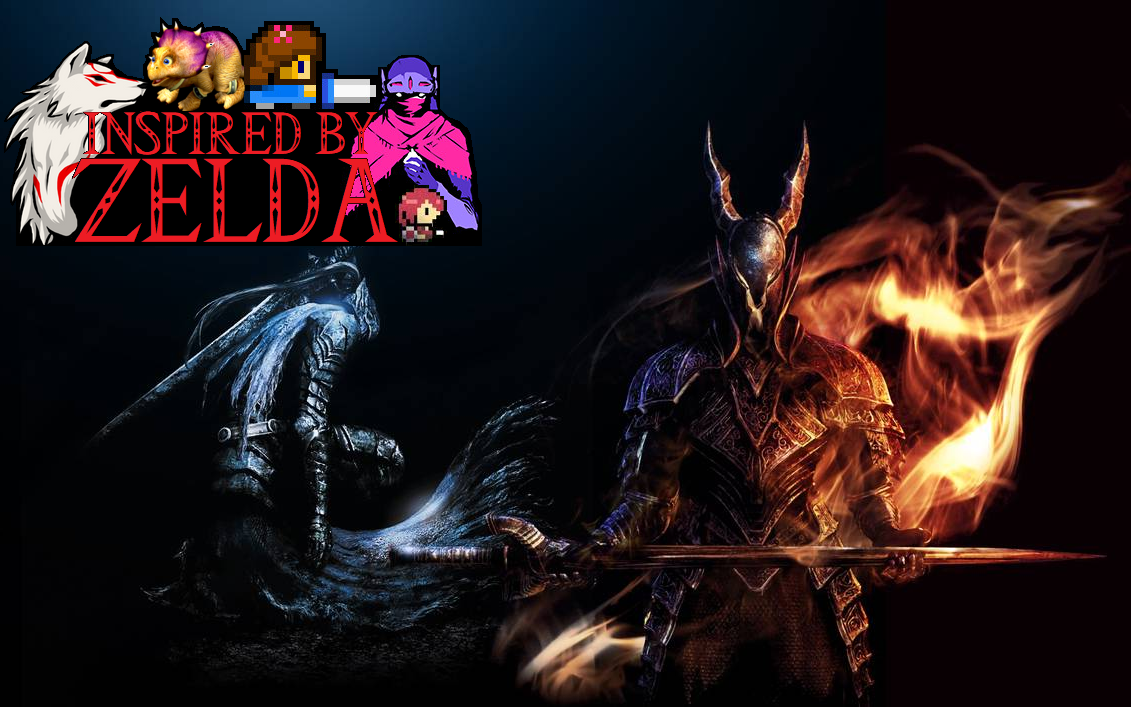 Rare is the video game destined for legendary status, its appearance on the scene not just setting the stage for a series continuation but terraforming the landscape of the entire industry for decades to come. Games like Super Mario Bros., Metroid, heck, we’re still living in the wake of Resident Evil 4; the endless tide of third-person shoulder-shooters seemingly refusing to recede. Our beloved Zelda series contains a few of these foundational masterpieces, namely The Legend of Zelda, A Link to the Past, and Ocarina of Time. These titles shook the medium to its core and have influenced countless games since with their design philosophies and mechanics. One of those games has managed to do the same and seems certain to be remembered with as much reverence and respect in, let’s say, thirty-five years. This is Dark Souls.

My introduction to FromSoftware’s breakout hit came a couple of years after its 2011 release. After repeated disappointments in the gaming sphere from both new properties and established series alike (one in particular had recently celebrated its 25th anniversary), I decided to try something different. Dark Souls is an action-RPG with unique online features and a reputation for crushing difficulty; not exactly up my alley at the time. I was searching for the type of player-driven exploration and freedom that had pulled me into my love affair with the Zelda series as a child. I finally found them in Dark Souls and felt an appreciation of experience I’d missed since my first, uninitiated adventures through Hyrule. Those early explorations across unknown lands, from games that rarely intruded upon my freedom with story segments or tutorials. That feeling that I was getting out of the game what I was putting into it; improving at combat, making my own discoveries, and charting my own course through a mysterious world.

Consider this my recommendation to the Zelda community to try out the modern masterpiece that is Dark Souls. While the surface details may differ in tone, Zelda DNA flows through it. Not just because both games are Japanese takes on Western fantasy, nor because Ocarina of Time‘s patented lock on combat is integral to both. Dark Souls draws on the intrepid spirit of Zelda to embolden the player’s desire to explore and discover. Around every corner is something to learn, and the satisfaction comes from knowing that everything accomplished was earned.

THE ELEPHANT IN THE ROOM 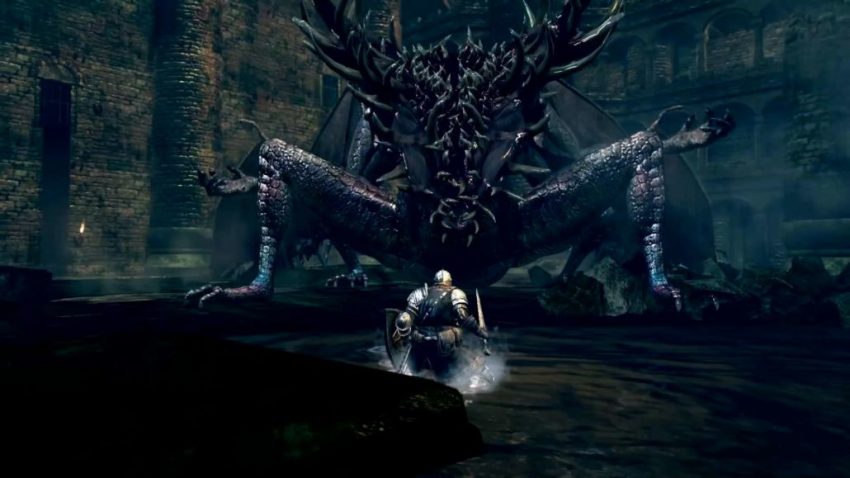 Dark Souls has become notorious for its supposed difficulty, but most people acquainted with the game will likely agree that this reputation is largely exaggerated. Naturally, becoming experienced will make the game easier, and Dark Souls is probably of above average difficulty by modern standards. However, there is often this implication of overwhelming, masochistic brutality and that simply is not the case. If anything, Dark Souls offers players more control over the level of challenge than most games, these tweaks are just baked into the mechanics rather than selected on the title screen. Just as classic Zelda allows you to find optional heart pieces and sword upgrades to mitigate the difficulty of combat, Dark Souls allows these types of power increases and more, including the ability to increase heal charges, upgrade armor, and find special weapons and spells. Moreover, the openness of the game world allows these difficulty modifiers to be exploited early in the game, even immediately after the tutorial.

The challenge in Dark Souls doesn’t come from complex combat; it is a product of the game’s learning experience. The tutorial will teach you the basic controls, but the onus is on the player to learn virtually everything about the game. How does the magic system work? Experiment with it and find out. Don’t know where to go? Choose a path and persevere; if you get overwhelmed, go another direction. Not understanding the story? Dig into the item descriptions to look for common themes and terminology. Games like Devil May Cry or Bayonetta have complicated, challenging combat that unskilled players may never be able to overcome. Dark Souls does not. It just requires that the player earn things most games provide free of charge. Some patience is needed, but lightning-fast controller manipulation is not.

That said, death and defeat are inevitable in Dark Souls. Inexperienced players will face hurdles and the game will not give you a helping hand over them. When death occurs, your accrued currencies, souls and humanity, will be left on a “bloodstain”. Failure to return to and retrieve your bloodstain will result in the loss of those currencies. While this can be discouraging, these currencies are not really that important and can always be regained. What is important is to treat each death not as a failure, but as a learning experience. Learning the game’s nuances and developing strategies will be the path to success. The player only fails when they give up.

DISCOVERY IN A DARK WORLD 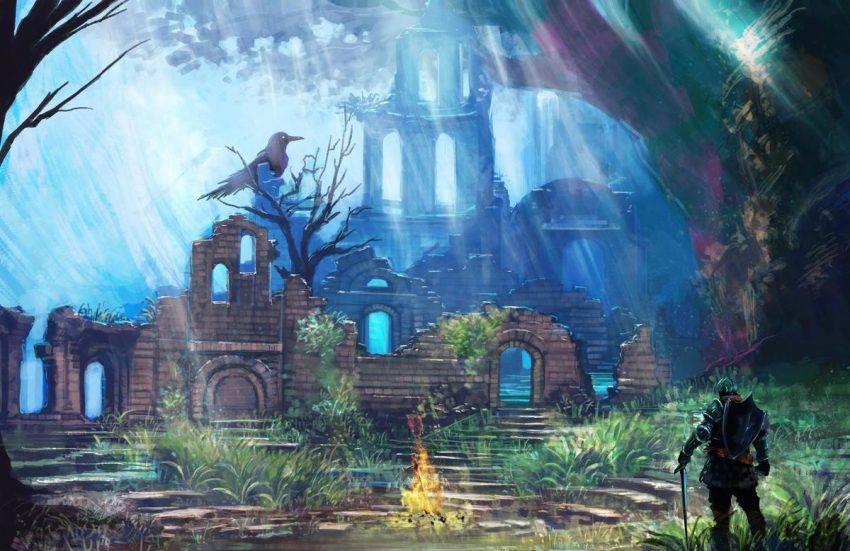 Dark Souls’ most impressive triumph is the brilliantly realized world of Lordran, the Land of Ancient Lords. Like Hyrule (Breath of the Wild notwithstanding) and the worlds of many other action-RPGs, Lordan is open-world in the sense that the entire game can be explored at will, but is divided into distinct areas rather than having an enormous, seamless overworld seen in series like The Elder Scrolls. Where Dark Souls distinguishes itself is in the interconnectedness of the game world. Lordran is already deep into a state of decay. While there is a safe hub area, there are no towns and most of the rest of the world is hostile. Imagine Ocarina of Time’s Hyrule except every area is a dungeon and, rather than being entirely enclosed, those dungeons all connect to one another, often from multiple points on the map. This makes exploration through a dangerous world much more convenient, without resorting to the non-solution of warping, which becomes available in a limited capacity about two-thirds of the way through the game. Making the player repeatedly traverse Lordran creates a sense of place and memorability, and the diverse locations and enemies keep the backtracking interesting. It also allows for different progression paths through the game. The epitome of this openness is the fact that there are seven different bosses that could potentially be your first after exiting the tutorial. Replayability is extremely high in Dark Souls.

Despite the lack of towns or encampments, there is no shortage of intriguing NPCs with distinct personalities and rewarding questlines. The word “quest” is used loosely here; there’s no floating exclamation points or log entries and limited tangible rewards, but the journeys of these characters are fulfilling in and of themselves. Lending to the game’s immersive quality, many of these NPCs serve as vendors, but you shouldn’t expect them to always sit in the same spot. They have goals and motives of their own, rather than just being gameplay considerations for the player’s convenience. Finding and forwarding these character’s journeys is an adventure in and of itself.

In fact, Dark Souls’ entire story will remain shrouded in mystery for the game’s duration, unless the player is curious and diligent. Besides a handful of boss introductions, there are virtually no cutscenes. If it were not for the intro movie that plays after the character creator, there would be almost no expositional moments in the entire game. The events of the game take place on the back end of the overall narrative and most of the most important events have already occurred by the time the game starts. Most of this “lore” can only be found by reading item descriptions and activating difficult to find dialogues. As a result, most of Dark Souls’ story is essentially optional. If you’re interested, there’s tons of depth to delve into. If you’re not, you’re free to completely ignore it. 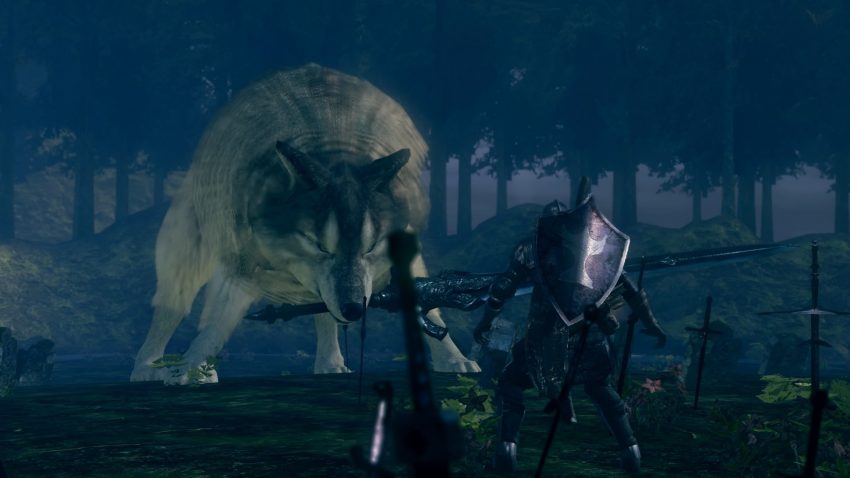 As this is intended to serve as a recommendation of Dark Souls to fans of the Zelda series, it is appropriate to air a few caveats in order to prepare the uninitiated for distinctions between the two. Dark Souls channels many of the philosophies of classic Zelda but is certainly a singular experience.

Dark Souls is a much more robust RPG than any Zelda title. Souls pull double duty as currency and experience and are used to level up traditional role-playing statistics such as vitality, endurance, and intelligence. Even compared with Breath of the Wild, there is a much larger selection of weapons, shields, bows, and magic casting equipment at the player’s disposal in Dark Souls. Weapon move sets are more diverse and interact with the statistical systems in more complex ways.  There are also more armor sets which, along with the aforementioned equipment, influence your movement speed and dodging ability. Dark Souls is not a cRPG that requires pouring over stats for hours or rerolling builds, but it certainly has some additional complexity compared to heart pieces and tunic color.

Calling Dark Souls’ narrative more “mature” sounds pretentious to me and I think I’ve used the word “dark” more than enough, but the game’s presentation is far grimmer than your typical Zelda game. Most Zeldas are fairly lighthearted and even the more serious ones are tonally heroic. The main characters tend to be either infallibly valorous or irredeemably evil, making it easy to pick sides in some simple narratives. Even the melancholy Majora’s Mask has moments of optimism and ends on an unambiguously hopeful note. Dark Souls has some wry humor but is mostly dour from start to finish. Thematically, it focuses on the concept of entropy and the inevitable ending of kingdoms and worlds. Decay and disease are practically omnipresent in Lordran, and the tonal approach is one of persistent tragedy. Dark Souls is an amazing game, but it is rarely a happy one and this may be a turn off to some Zelda fans who prefer that series’ more whimsical presentation. It is worth mentioning here that Dark Souls earned an “M” rating from the ESRB for Blood and Gore, Violence and Partial Nudity. This refers to one instance of implied nudity. The missing content warning that I think is worth pondering is the pervasive atmosphere of death and futility. The violence is never gratuitous, but Dark Souls does contain some disturbing content, both thematic and literal. 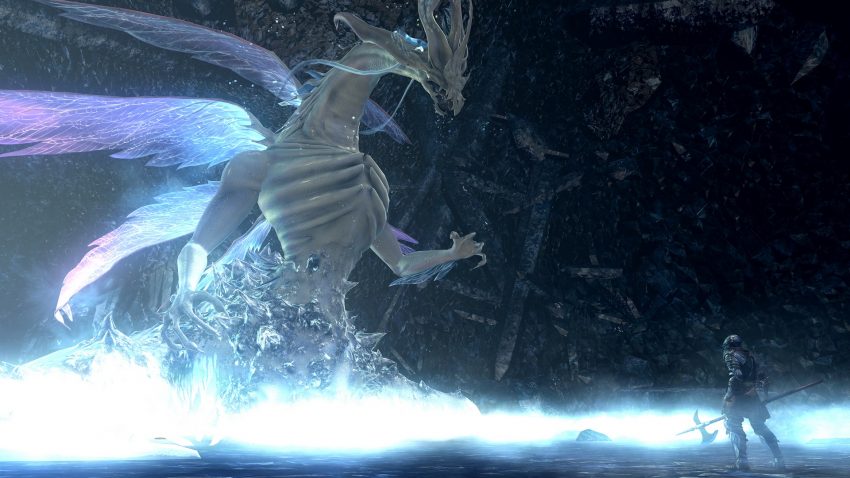 Dark Souls managed to grip me in a way no game has since I was a young child playing Ocarina of Time. While the latter remains my favorite video game ever, it is impressive that the former captured my fascination as an adult, without the help of my childhood wonderment. It conjured in me the same sensation I felt when exploring those classic versions of Hyrule, treading into the unknown and earning every shred of progress. I am confident that Zelda fans will appreciate Dark Souls’ core gameplay and values, especially if your favorites are the older titles; pre-Wind Waker may be the cutoff. Fans of the newer Zeldas may not find the obtuse narrative or complete player freedom to their liking, but Zelda fans have diverse tastes, so I still implore them to give it a go. There isn’t anyone to whom I wouldn’t recommend at least trying Dark Souls. It is one of the greatest games of all time.

Dark Souls Remastered is available for Nintendo Switch, Playstation 4, Xbox One and PC. There are also the original Playstation 3 and Xbox 360 versions, but they have severe performance issues. It is also worth mentioning that the online multiplayer is far less active on Switch, and the default controls can be awkward when playing in handheld mode.

Comments
Sorted Under: Editorials, Inspired By Zelda, Slider, Zelda Like
Tagged With: No tags were found for this entry.