Gossip Stone: Should The Legend Of Zelda Be Remade? Hey guys and welcome to the latest edition of Gossip Stone! Recently I finished replaying the game that started it all (thank you virtual console) The Legend of Zelda. This game started one of the most beloved video game franchises of all time and we can more than likely expect to the series sticking around for a lot longer. Anyway finishing this game again got me thinking, what would a remake of this game be like? Is it even worth it? So today these are the two questions that are going to be answered so without further delay let’s begin!

So first of all let’s answer the question of “would it be worth it”. To be completely honest with you, I think this depends on who you ask. Some people believe that the game aged terribly and a remake of it would need MAJOR improvements, not just to the graphics either. In the original game, there weren’t any towns or NPC’s other than a few old men and shop keepers and even then they were just randomly camping out in a cave. This leads to no story development and the list can go on of things that would need improved on. If things like towns were added though, that would ruin the feeling that we got in the original game. The original Legend of Zelda was all about exploration and constantly uncovering secrets, nothing more. That’s why I agree with the fans that would appreciate a remake. Some people want it for nostalgic reasons, others want it because they haven’t played it yet. I believe that this game is worthy of a remake, and I will continue to stand strongly by my opinion.

Now that we’ve answered that question, there is one more that I would like to address. What would the game be like? Well every time I think about it I find myself imaging the engine used in A Link Between Worlds. Since this was the first top down Zelda game in 3D I always think of it when I imagine remakes of older games such as Oracle Of Ages/Seasons and Link’s Awakening. That is only what I believe would happen in terms of graphics. The game play would definitely have to be exactly the same as the original. Now I’m still not too sure about only being able to perform forward sword thrusts, but it couldn’t be that bad. I’d also really want the remake to be exploration focused. No silly story to get in the way of your adventure. You have a princess, she was kidnapped by a pig and now you have to go rescue her, simple as that. One thing I would like to see improved on however is the advice the old men give you in caves and dungeons. Make them more frequent, and make them give you advice that is actually useful, not weird, cryptic stuff like “east most peninsula is the secret”. 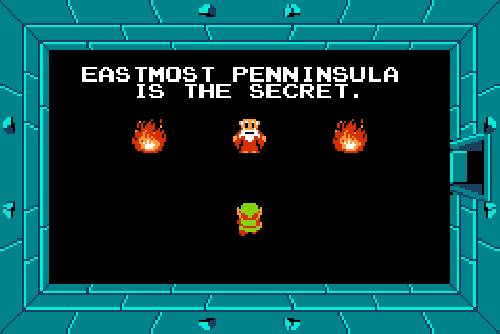 I can tell you truthfully that these are the only changed I’d like to see made if there were a remake of the game. Even if the game isn’t remade I would be ok with that because it is still a great game and anyone who hasn’t played it yet should really go try it out now. It’s available on both the 3DS and Wii U eshop for not a lot of money. Anyway, now it is your turn to discuss what you believe should be the fate of The Legend Of Zelda. Leave you thoughts in the comments below.