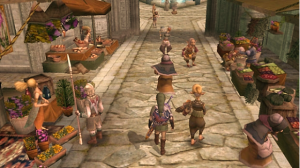 Zelda’s start was a far cry from the NPC filled worlds that we have come to love. You start out in the middle of a field full of enemies and a quest before you. You stumble across a few people along the way, but most of your journey is spent traversing dungeons. Fast forward to today and now the lands are filled with NPC’s that are mostly there for filler. Apart from the staple characters like Link, Zelda, the antagonist, Impa, etc., most of the interaction done with friendly lifeforms is for progression purposes only. So I ask, are these characters important? Does a Zelda game need a bustling town in order for it to feel real? Take a look at my take on this and leave your opinion after the jump!

One of the bragging points Twilight Princess has is its diverse NPCs. You never forget the first time you walked into Hyrule Castle Town outside of the twilight and saw all the different people running around the square. Talking to all of them left you with hints of what to do next, but offered little insight into who they were. Zora’s Domain had the same setup. There were many Zoras placed throughout the area, but their sole purpose was to offer you hints as to what to do next. These characters, while adding realistic aspects to the world, offer little in the way of developing the game. It’s the characters that you have a personal investment in, such as the children of Ordona, which make the game feel real. I find that I seldom talk to the people, seeing it as a waste of my time. Yet I always seem to be interacting with the children or the people of Ordona, because I feel such a connection to them.

Twilight Princess did do a good job when it came to the populous in the twilight. Upon speaking to them you see their fear, you hear their cries. It gives you a sense of investment and makes you want to accomplish your task so that you can mend their woes. Ocarina of Time achieved something similar to this by causing the entirety of Castle Town be destroyed and once peaceful places to suddenly be inhabited by monsters. In these instances the NPCs, though only having a few lines of dialog, became a community that you can connect with in a sense of wanting to save them. All of a sudden you can feel the weight of the world on your shoulders. Your inner hero comes out, and these people who are normally an annoyance transform into motivation. Your drive to beat the evil that oppresses them rises, and an epic quest is wrought.

One of the things I want for future Zelda titles is for NPCs to be more interesting. Maybe they can talk about their personal lives. Or maybe they can tell stories about in game lore, similar to Niko’s Picture Show. These aspects would help the game feel fuller, adding character to the land and helping you draw a connection to the people. Part of the joy of adventuring could be discovering about the people around you, an addition that I would welcome with open arms.

What do you guys think? Do you want NPCs to be more interactive, or would you rather they stay as hints for progression? Leave your thoughts in the comments below.