From Dust Bin to Display Case: An Interview with Studson Studio

Posted on February 18 2021 by Andrew Millard 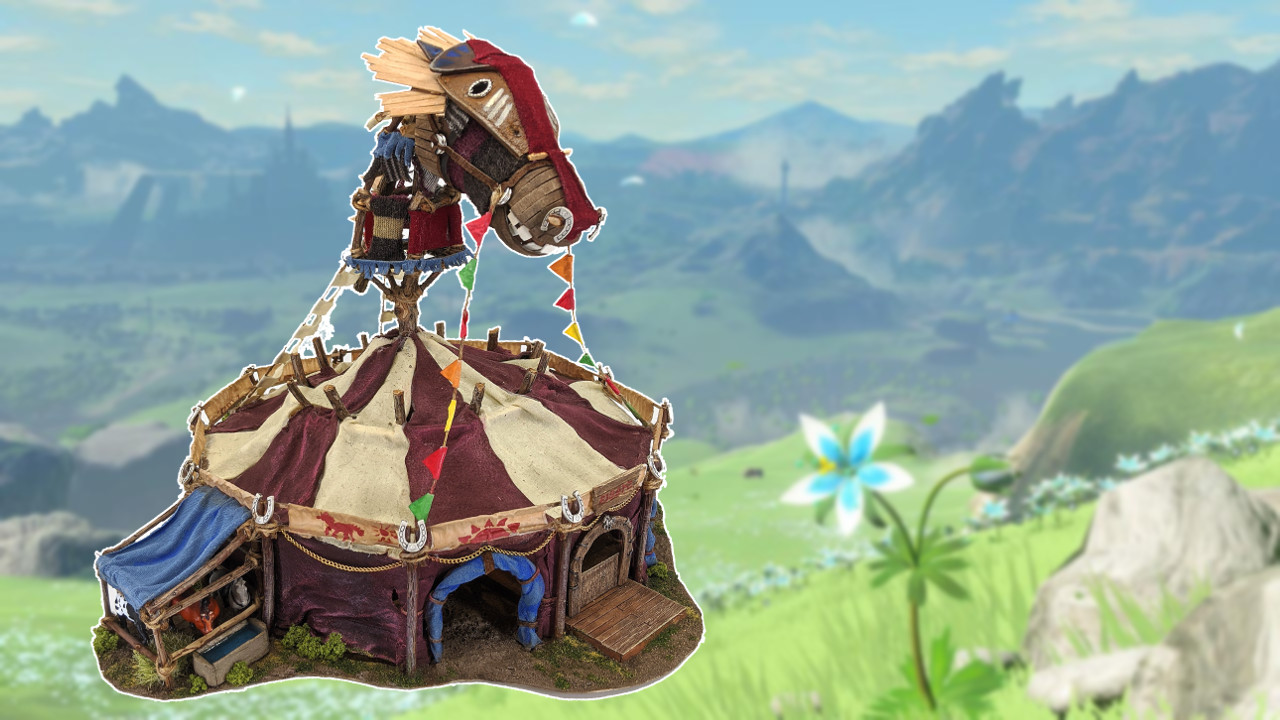 There are few joys to be had online that rival the feeling of finding a fun new YouTube channel. An entertaining host and topic can bring together humor and education like a great teacher. With decent equipment and videography skills, they can rival the production values of nonfiction television. And because of the community and intimacy that develops on YouTube, they can forge a stronger bond with their audience.

I recently shared that unique excitement with my young daughters as we stumbled upon the wonderful crafting channel Studson Studio. From just a couple of nooks in his home, Studson brings to life incredible models and tableaus of video game and pop culture characters and moments. This alone puts him in league with any number of high-level artists on YouTube. Where Studson surpasses them is in his uncanny ability to create using household items and basic art supplies. Combined with a sharp sense of humor and a knack for editing, Studson’s videos become some of the best crafting content you can find on the site.

With three impressive Zelda-themed builds under his belt, including a brand new one featuring The King of Red Lions, Studson was kind enough to have a conversation with me about his process. Read on, and I hope you’ll get sucked into his world of reborn apple cartons and cereal packaging as much as we have.

Studson, thanks so much for sharing with Zelda Dungeon! The first thing that sets your crafting videos apart is how well you incorporate repurposed packaging and other recyclables. How does upcycling and improvising factor into your artistic style and approach?

I’m always having the most fun when I’m not thinking about the planning or details too much. This might be from a lifetime of procrastination, but I feel the most creative and in a “flow” state when I’m winging it. If I can, I avoid measuring or making templates for myself. If I make a mistake, the material I like to use is generally cheap enough that I can just try it again. I also don’t like to get too bogged down in the details. I have immense respect for artists that can meticulously create and paint every detail, but fast and loose and “close enough” are the keywords that describe my type of creation. As far as repurposed materials go: as a kid, I loved the “I SPY” book series and the satisfaction of seeing something common being hidden in plain sight as a detail in a larger diorama. I get this same satisfaction when I can hide a specific piece of garbage or found item into a build, like a broken earbud as a flower pot or a multi-colored sock to add texture to the “Breath of The Wild” horse stable.

I love that you aren’t shy about leaving in mistakes and second tries. So, is there a ratio of repurposed materials to crafting supplies that you shoot for?

It’s pretty important to me that the things I make could be replicated by the average resourceful person that has a full garbage/recycling bin and a local discount/dollar store. There isn’t a ratio I shoot for, but I certainly feel more satisfied with a build if it contains something free, repurposed, or that you wouldn’t otherwise think to craft with. Sometimes a project is born from something that I already have lying around. For example, making Terrako, the egg guardian was largely inspired by the fact that I had a few decorative blue glass beads lying around which looked very much like Sheikah tech to me.

What was your path into miniatures and model making? Some of your videos make reference to tabletop RPG scale. Did wanting a detailed game of D&D play a part?

My interest in miniatures and models is largely inspired from filmmaking. As a kid, I was fascinated with the animatronic dinosaurs in “Jurassic Park,” which inspired my siblings and I to recreate the movie using our toys. Later, I became obsessed with the behind-the-scenes special features from the “Lord of the Rings” trilogy and spent time creating various weapons, costumes, and staves out of dollar store items, thrift store finds, and scrap wood. As an adult, I fell away from making miniatures, until I jointly rediscovered YouTube creators building plastic models and D&D tabletop terrain. I’ve played in a few D&D campaigns as a player, but only ever played in games using “theater of the mind”. Imagining a world with friends is fun, but I personally love to have the tactile experience of seeing and touching the world in front of you. I discovered Black Magic Craft and fell in love with the idea of creating my own world [whose pieces] all exist at the same scale. Even if what I make doesn’t appear in a D&D game, I feel as if I’m making my own miniature theme park to enjoy.

It’s not just the quality of your work that makes your videos entertaining. Your clever wordplay, quick-witted humor, and comedic editing create a hugely entertaining aesthetic. The sheer volume of Pokemon puns in your trainer gym video is a great example. Do you work off a script? Do you plan the jokes, edits, and camera tricks ahead of time?

The scripts, jokes, and camera tricks all sort of develop organically during the crafting process. Sometimes the act of what I’m making or the material I’m using might remind me of something silly or dumb or a thing that could make an interesting video beat, so I’ll jot down a note for when I record voiceover later. For the Pokemon video specifically, I did actually take inventory of Pokemon figures that I owned and made a spreadsheet cataloguing the Pokemon with workable name puns. For the rest of the puns, they all developed on the fly while very slowly recording voiceover over the course of a couple days.

As your repertoire has grown, what aspect of model making has remained fun, or perhaps become even more fun?

The part that has remained the most fun is the discovery of free crafting material. My general grocery shopping yields the same waste products, so I have a huge stock of paperboard and plastic caps, but when there’s a new piece of packaging that looks extremely unique, it’s fun brainstorming what it could become later. The satisfaction of holding a finished building is also huge for me. I realize that 3D modeling and 3D printing could get me far closer to making accurate representations of things from video games, but feeling something in my hands and knowing what its base parts used to be is very motivating. Also this isn’t crafting specifically, but I love watching and learning from tons of other creators on YouTube as they explore/narrate their creation process. I’m hugely inspired by many creators in the D&D, tabletop, wargaming, sculpting, and crafting scene.

Your Zelda videos are incredible! The horse stable used such a variety of materials while the Terrako one focused on sculpting. They give a good cross section of your abilities. When you take on a specific challenge, how do you decide which of your maker skills will be most useful?

For me, I think a safe rule of thumb comes down to [two things]: project complexity and whether the model is a character or building/terrain. For the little Guardian, the details feel so specific and organic, that using clay feels like the most clear way to recreate it without it appearing uncanny AF. I used recycled items that were almost close enough. For a larger detailed piece of amorphous terrain, I try to get away with being less specific in the details. When I was thinking about the horse stable, I remembered it as a colorful hodgepodge of fabrics and textures. Obviously, it has specific details like a character [model might], but since there were so many, I tried to be a little looser with accuracy. It was also created during a time when I couldn’t easily go out to buy new materials, so it was a case of, “well let’s see if I can make it with just what I already have lying around.” Even now, if I have the ability to get new materials or go shopping for something, the satisfaction of making something from what I already have remains a goal of mine.

Last question; and speaking of Zelda, what’s your history with Legend of Zelda games? Do you have a favorite?

It’s always so tough to make a call on what Zelda game is my favorite. The first one I actually played was “Majora’s Mask,” though I had watched a friend play “Ocarina of Time” when it came out. Since then, I’ve played a majority of the console entries. I haven’t yet played any of the handheld ones, so I know I’m missing out there. I loved every moment of exploration in Breath of the Wild, but my favorite just might be “Majora’s Mask.” I love how the characters were recycled in ways that feel unique and fresh. The repeating time mechanic is what cinches its spot as number one for me. I’m not generally a completionist, but seeing the loose ends for each character tied up over time as the days repeated was very motivating for 100%ing that game. And I’m constantly on the edge of my seat regarding “Breath of The Wild” sequel news!

Thanks, Studson for the wonderful insight into your process!

Check out Studson’s videos linked and embedded above, or visit his channel at youtube.com/studsonstudio.

And let us know what you think of Studson’s creations in the comments!

Andrew Millard is a writing teacher in the upper Midwest. He’s currently playing Hades badly and dreaming of the next Zelda game that isn’t connected to Breath of The Wild.

Comments
Sorted Under: Breath of the Wild, Editorials, Editorials, Games, Hyrule Warriors Age of Calamity, Original Content, Slider, The Legend of Zelda, Zelda Fan Content
Tagged With: No tags were found for this entry.