Fan Fiction Friday: The Song on the Leaves – Chapter 4 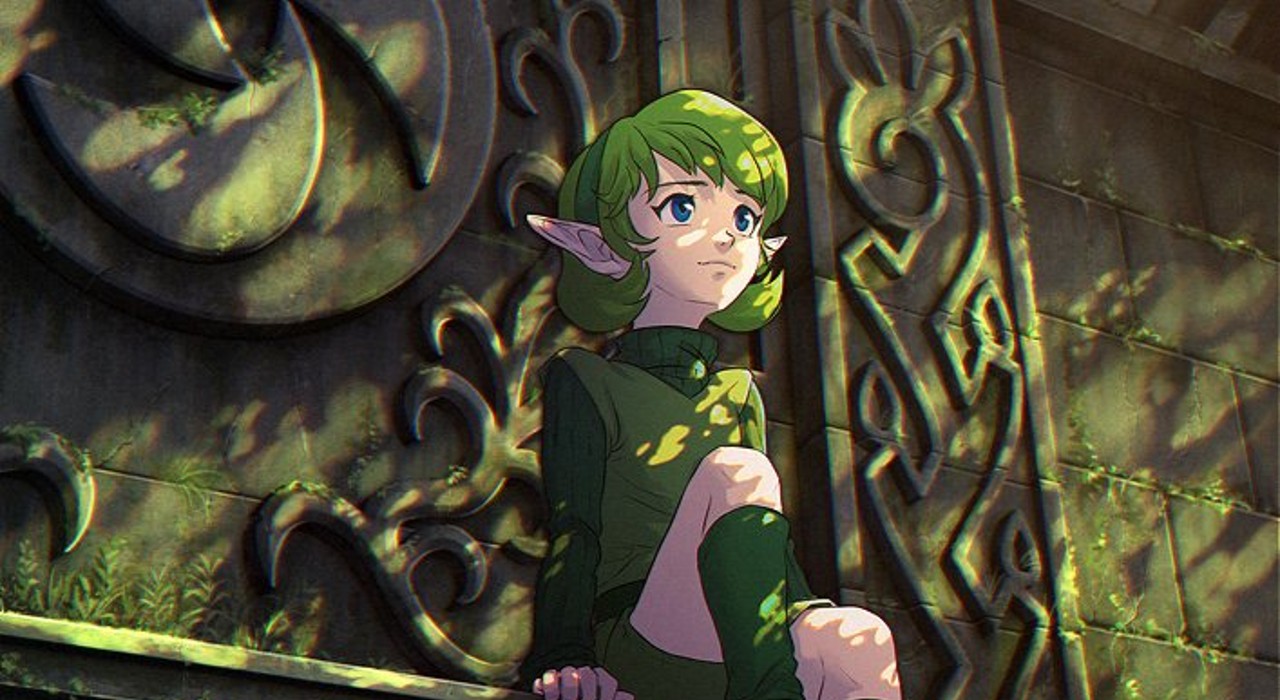 -Seventy Years After the Seal-

When Saria played her ocarina with Fado on the violin, she felt transported to another world. Ever since Fado became her apprentice, he had taken on his role very seriously. Saria tried to teach him everything she knew about the Sage’s power and their history, including sealing magic and imbuing their instruments with power. Fado discovered he had an affinity for calming the winds and unofficially dubbed himself the Wind Sage.

Fado played a simple and lighthearted melody, and after a moment, Saria felt a rush of power from the Forest Medallion in her hands.

“Did it work?” he asked hopefully.

After a moment, the sensation she felt quickly faded.

“Well, it did, but…it faded after a moment,” Saria replied.

“Hmm,” Fado scratched his chin thoughtfully. “There must be something I’m missing!”

“You’ll get there,” Saria reassured him. “When the Sages are needed, we awaken and gain more power together. I’m sure that’s part of it.”

“You’re probably right,” he sighed. “Is it that time already? I promised the Know-It-All Brothers that I would perform the music for their play. You know how they are. Well, I’ll see you back at town!”

Saria waved as he took off down the stairs leading back to the Forest Meadow maze. The Sages become stronger together, she reflected on her words to Fado as she sat on her favorite tree stump and closed her eyes. They had kept their knowledge of the darkness in the forest from the other Kokiri and the other Sages, a decision Saria regretted as the years went on as she began to feel the power of the Sages wane over time.

It happened first with Rauru’s passing, eventually followed by Nabooru, Impa, Princess Zelda, and Darunia. Darunia’s passing was particularly hard on her, and it was at the moment when she realized that she and Princess Ruto were the only remaining Sages left that she felt weakened.

Saria listened to the trees around her with her palms pressed against the smooth surface of the stump. Her palms were pressed against the surface of the stump, her ears strained to hear the voices of the forest. It had taken her many years to develop the skill. The trees couldn’t speak to her, per se, but she could feel their pain or growth. Over time, the trees began to sound anguished, their cries drowned out by shadows that overwhelmed them. Saria wished she could do more to ease their pain. She heard footsteps ascending the staircase. Fado must have left behind his bow again, she thought with a chuckle.

After a moment, a low yet soothing voice spoke up. “Saria?”

Saria looked up and was surprised by who she saw. The next heir to the throne, Princess Zelda – or rather, Zelda the Sophic as people called her. Her long, golden hair was braided and draped over her shoulder, and strands of sharp blonde hair like lightning bolts framed her pale, round face. Her dress was light blue with accents of gold and a dark blue cover.

Her nickname, ‘Sophic,’ was granted due to her intelligence and wisdom. While she had a striking resemblance to her grandmother at a first glance, Zelda the Sophic had her father’s focused blue eyes and staggering height. Saria had always felt a bond with Zelda the Sophic ever since she was a young girl.

Saria hoisted herself off the stump in surprise. “Z-Zelda? How did you get here?”

“I followed your lullaby,” she replied simply.

She knew to follow the music? I never told anyone other than Link and Fado that trick, she thought. After a moment, she remembered just a who she was standing in front of and quickly curtsied and spluttered,

Zelda smiled gently, “There’s no need for formalities. I may be here on my father’s behalf, but we are friends.”

“King Daphnes sent you? How can I help?” Saria asked.

Zelda sighed and sat on the tree stump. “It began with a nightmare I had a few days ago…about the King of Evil overtaking the land of Hyrule. When I warned my father, he told me of the reports of attacks happening late at night in Hyrule Field. He mentioned that my grandmother once spoke of your concerns regarding the seal on the King of Evil many years ago. He fears…you may have been right all along to question Hyrule’s peace.”

Saria hung her head as her heart sank. They feel it now, too? I wish it wasn’t true…

Saria cleared her throat and replied, “It’s true…I began sensing darkness in the shadows and an evil in the wind some time ago. I’ve been training a Kokiri like me, Fado, to help protect the peace. But with Ruto and I being the only original Sages left, I’m not sure that what we’re doing is enough. I fear Ganondorf could overpower us.”

“We’re grateful to you all the same. It’s part of why I came here today,” Zelda said. “I have a favor to ask. With the passage of time, the Sages are few in number, and we may need your power again when the time comes. While my father and I can make preparations of our own, we need another Sage to join the ranks and merge your power. At least then…we may have a chance.”

“So, you want me to warn Queen Ruto?”

Zelda the Sophic pulled a letter from the small pouch attached to her belt and handed it to her, “This is a letter from my father, detailing everything I’ve already told you. I would go to Zora’s Domain myself, but tensions have been rather…high of late. But yes, please warn her of the dangers, and request that she find a successor. I don’t fully understand the power of the Sages, but they awaken when they are needed. Perhaps that time hasn’t come yet, but we should be prepared all the same. Can you do this?”

Saria nodded, “Yes. Anything to protect the future the Hero of Time left for us…I’ll do it.”

Saria approached the crashing waterfall of Zora’s Domain with trepidation. Don’t be nervous, Saria told herself. Ruto is your friend, she’ll understand the situation. She carefully removed her ocarina from her pocket and played Zelda’s Lullaby. After a moment, the waterfall split down the middle and revealed the entrance to the domain. She leapt across the gap and was overwhelmed with the strong scent of salt water.

It had been a number of years since Saria’s last visit, but she always loved coming to Zora’s Domain. She took in a deep breath of the salty air and watched the reflection of the water cast onto the coral ceilings above. Over time as Zora’s Domain flourished, bright coral reefs emerged and the rocks glowed. Under Queen Ruto’s rule, the Zoras were content and strongly independent. She followed the path leading up to the throne room where Queen Ruto sat. Much like the Kokiri, Zoras had considerably long lifespans. To Saria, it looked like Ruto hadn’t aged a day.

When Ruto saw Saria, she leapt up and jumped to the floor from the decorative waterfall and ran over to greet her.

“Saria, what a pleasant surprise!” Ruto knelt down to hug her.

Saria returned the embrace and replied, “It’s good to see you! It’s been too long. How is Jabu Jabu?”

“Too big for his own good,” Ruto laughed. She cocked her head, “What brings you to Zora’s Domain?”

“Well…” Saria considered removing the letter from her pocket. “I have a question. I’ve been…sensing an evil presence lately. Not all the time. But I feel like it’s gotten stronger, and now that we’re the only two original Sages left…have you experienced that, too?”

“Hmm, now that you mention it…” Ruto replied thoughtfully. “The water has felt much colder than before. Lethal, like when the King of Evil took over so many years ago. I think you’re right.”

“I’ve been thinking of ways that I can help protect Hyrule for a long time, and I actually found a successor named Fado. I wrote about him to you before.”

“I remember him, yes. We met once in Castle Town.”

“I…don’t want to alarm you,” Saria chose her words carefully. “But I think we need to be prepared for the possibility that our seal against Ganondorf may break. It might be best if…if you try to find a successor as well. Another Sage who can help us if we need it.”

Ruto pressed her fingers to the bridge of her nose and sighed. “I always thought it could happen, but I had hoped we wouldn’t have to deal with something like this ever again in our lives. I’ll take your words to heart, Saria. Thank you for coming to tell me in person, it means a lot to myself and my people.”

Saria nodded and wrung her fingers together. “I’m sorry my visit couldn’t be a more positive one.” I hope I haven’t upset her too much, she thought worriedly.

“Don’t worry. After all, he’s not back yet,” Ruto regained her composure. “How about joining us for our Festival of the Loch? We’ll have live music and dancing, plus all the fish you could eat!”

“Um, sure! I don’t eat fish, but I wouldn’t mind celebrating with you all,” Saria said.

For most of the evening, Ruto was in high spirits, socializing with the Zoras and participating in the festivities. But in moments when she was alone, Saria caught glimpses of her crestfallen gaze and eyes glistening with tears.

Michaela El-Ters is an Associate Editor for Zelda Dungeon. She has always been fond of Saria and her friendship with Link in Ocarina of Time (this is not her first time writing about it in some way on this site), and this story serves as a tribute to the beloved character and her legacy in the Adult timeline. Along with writing, Michaela enjoys watching shows and movies, playing video games, and hugging her dogs constantly. To read more of her content, check out her blog here.

Michaela El-Ters is an Associate Editor for Zelda Dungeon. She also writes blogs and streams games on the entertainment website Objection Network managed by her roommates. Her favorite Zelda game changes with the seasons, but the series as a whole is near and dear to her heart.