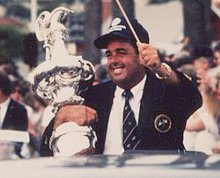 KUSI News had a video that they posted up where they were talking about Dennis Conner, an American yachtsman. Now this may seem to be one of those posts where one wonders, “Why the heck is this posted up on here? This has nothing to do with Zelda!” True, at first glance it doesn’t, but if one focuses intently on the background music playing in the video you can hear music from the Legend of Zelda playing.

Take the jump to see, or in this case, hear for yourself.

(The music itself starts 37 seconds in.)

I think that it is pretty awesome that they would use Zelda music in a video such as this. Perhaps Dennis Conner is a Zelda fan? Of that, I’m not sure. Another thing I noticed that is shown in the film is that it’s the 25th anniversary of his win in the 1987 American’s Cup. Not only is it’s his but it’s also Zelda’s 25th anniversary as well. I wonder if that’s the reason behind the Zelda music. Once again, I shall say that I’m not sure of that either.

So what do you guys think? Is it neat that even in things that are completely unrelated to Zelda that they decide to have a reference to it? Tell us what you think in the comments section below!

Also, thanks to Slant2277 for telling us about this!