Diversity in Zelda: The Need for a Black Princess Zelda 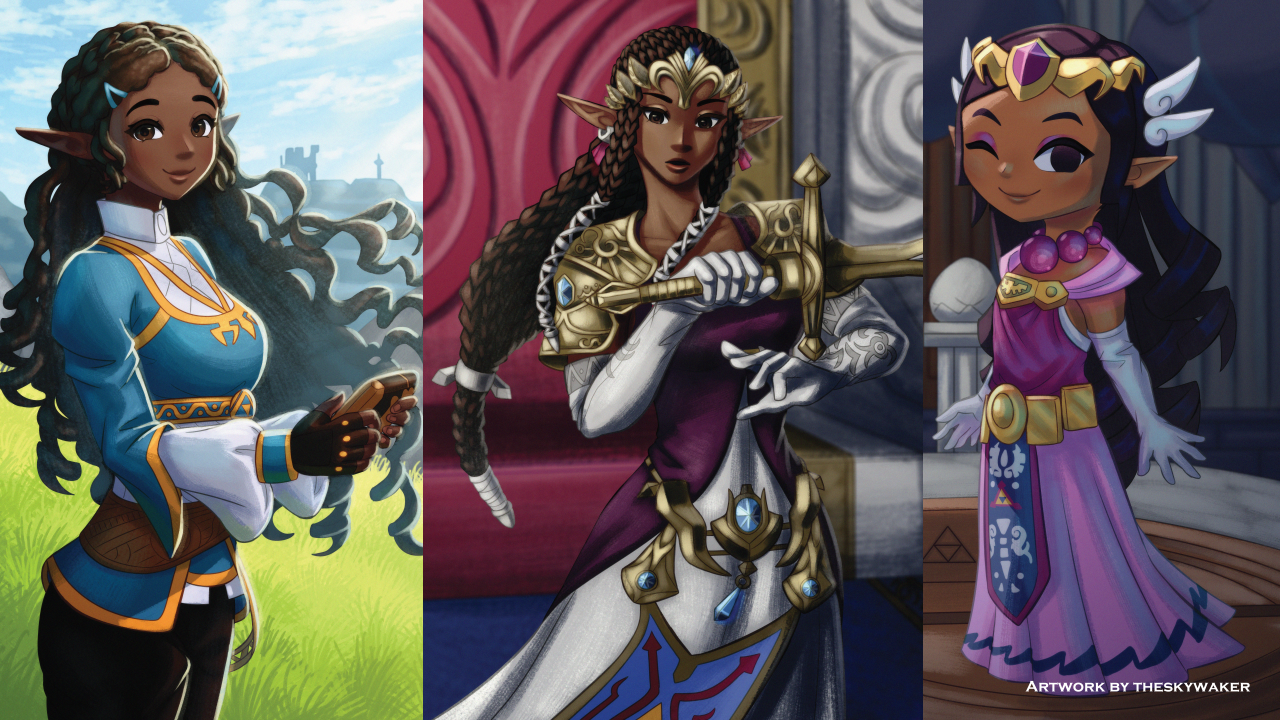 Princess Zelda is a multifaceted character who has developed from a damsel in distress to a powerful political player, a researcher, a sorcerous, a warrior, a leader, and a legend. By virtue of this complexity, Zelda is an inspiring female character who breaks down gender roles game after game. Despite her many changes over the series’ 35 year history, Zelda has never been anything other than white. This is a shame. And a missed opportunity to signal to women of color their potential to be legendary.

The Need for Change

Black women in America right now are constantly bombarded with content and voices (up to the highest echelons of society) which suggest that they do not matter, that they are inferior, and that they are not deserving of respect. Any and every symbol of Black power goes a long way to dulling those knives. To that end, a Black Princess Zelda sends the message that Black women are not just minor characters or antagonists, but complex, heroic figures of vital importance.

Zelda and Link always being portrayed as white suggests that only white people are capable of protecting the world and frankly that they rightfully control it. This is likely in no way the intention of those at Nintendo putting the games together, but may reflect an implicit bias among creators that ought to be challenged. This change is particularly possible in a series where the main trio of characters are unique manifestations of the Triforce throughout time, as opposed to the same exact character every game. Even an interpretation requiring a blood relation to the original Goddess, Hero, and Demise does not preclude more diverse representation by these figures, because it’s very unlikely the bloodline would experience no interracial interventions across all of time. And there’s nothing to say that the same spirit can’t occupy a body racially distinct from those in its past.

The Impact on Black Women

Black women are capable of anything, and the media we all consume should reflect that. Breath of the Wild Zelda is a brainiac, and Black girls seeing themselves in her may inspire them to be equally as intellectually curious. Especially since that Zelda happens to be a committed daughter with some heavy burdens to bear, as so many Black women are devoted to family or community and have institutional inequalities to attempt to push through. Zelda’s political prowess is also a fantastic aspect of her character to see oneself reflected in, and thankfully American politics is beginning to reflect that as well.

Zelda generally having supernatural abilities is also important. Black women would see power and magic as theirs to play with when a Black Zelda is shooting light arrows or smoking the competition in Super Smash Bros. With that, Princess Zelda being Black would mean the possibility of her being Black in spinoffs, cameos, mangas, fanart, and more. This depiction of such a significant character as Black could mean so much more than representation in a single game, or a single medium.

This series is in a unique position to change the race of its most prominent characters without requiring much of an explanation at all. Though, I don’t think it would shy away from making the Princess’ race a part of the narrative, either. Her gender has been at issue in the past with her brother thinking himself entitled to the power of the Triforce in Zelda II and her having to disguise herself as a male Sheikah in Ocarina of Time. So, I wouldn’t put it past Nintendo to deal delicately with the subject of race if part of the royal family of Hyrule was Black.

Speaking of, to depict the family which presides over the great kingdom of Hyrule as Black would add to the growing number of depictions of Black people as royals (Black Panther, Beyonce’s Black is King, She-Ra and the Princesses of Power, Bridgerton). All of which contribute to the idea that being black isn’t limited to any one lived experience, and allows people of color to occupy roles traditionally depicted by white people.

I could easily ask this same question about Link (in fact we did in 2013), and the analysis would produce a similar result of portraying Black men as courageous, determined, loyal, kind, sometimes-goofy dogooders. These questions take on particular significance when the only bearer of the Triforce coded as nonwhite is the power-hungry antagonist. All too often the media portrays people of color and LGBTQ+ individuals as conniving, immoral aggressors. To see people of color habitually cast in more positive roles would do wonders for dispelling stereotypes and boosting the self-image of those represented.

Given how fraught the relationship between Black and white people in America is in this cultural moment, seeing a Black Princess Zelda would be a firm accreditation of Black womxn as the bold, brilliant heroes they are. It would be a statement of allyship from Nintendo, as well as a highly visible and impactful piece of positive representation for a community so often underappreciated in the video game industry. Ultimately, it would encourage players to sympathize with a Black female character, to care about her and accept that she matters.

“Diversity in Zelda” is an ongoing series in which we highlight the Legend of Zelda’s approach to inclusivity, spotlight relevant characters, and speak with Zelda fans from marginalized communities. It is our desire for the installments of this series to be received with open minds, and civil discussions between readers are encouraged.

Alexis S. Anderson is a Senior Editor at Zelda Dungeon. She is a Distinguished Scholar at the UCLA School of Law pursuing a career in entertainment law. She spends her free time playing Switch, watching movies, and trying (but failing) to teach herself how to play the guitar.

Header images by theskywaker (Breath of the Wild, Twilight Princess, The Wind Waker)

Comments
Sorted Under: Diversity in Zelda, Editorials, Original Content
Tagged With: No tags were found for this entry.