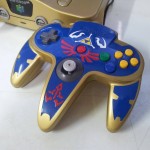 Regarded as the most beloved game for the Nintendo 64, Ocarina of Time has seen three different ports and at least five different controller options through the years. Each new controller has brought with it a different gaming experience, and either enhanced or detracted from the original gameplay. I have had the privilege of experiencing Ocarina of Time on all of its ports, and decided to give my take on how each controller handled the game and changed my overall impression of it. I will be starting with my tried and true favorite, the Nintendo 64 controller, and work my way to the newest in the line of Wii U Fight Pad controllers designed for Super Smash Bros. Without further ado, let’s play! 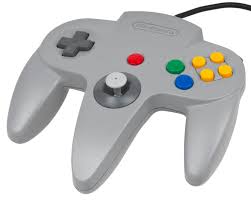 Ah the Nintendo 64 contoller, truly my favorite one to date; yes, I have heard the complaints about how the joy stick caused pain to the thumb area due to it’s plastic ridges, but as children we didn’t really care about the pain. We were too adsorbed in the games to pay attention to the damage our fifth digit was experiencing. So I am going to focus instead on the accessibility of the buttons and the overall feel that the Nintendo 64 controller had to offer.

Of course, this controller ranks as number one simply because Ocarina of Time was designed around it. But I have a few other reasons why I love playing Ocarina of Time on this original device. The main reason: C buttons. As we all know, to play the songs on the ocarina you must use the left, down, up, and right C buttons. I am a visual person, so it was easy for me to remember that Zelda’s Lullaby was left, up, right, left, up, right. It formed a pattern on the staff and made memorizing the songs easier. The Sun’s Song? Right, down, up, right, down, up. I haven’t played those notes in about four years, but I still remember the pattern to this day. This is something that I wished the GameCube controller had, but we will get to that in the next section.

Another reason why I adore the N64 controller is the space between my hands while playing. For those of you who remember the controller, you had two different hand options. You could hold it on either side, your left hand on the D-pad and L-button, and your right hand on the other side, or you could have your left hand in the center controlling the joy-stick and z-button. I always held center, mainly for Z-targeting and joy-stick controls. This set up flows better for me. One of the reasons I hate the Wii U Game pad is the amount of space between my hands. I find hand eye coordination easier when the distance between righty and lefty is shortened. 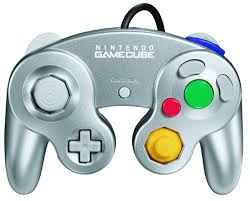 I never owned a GameCube, but I did have a Wii with its backwards capabilities. I also had a GameFly account and imagine my surprise when I saw my favorite childhood game as a GameCube option! I immediately put it on my wishlist and borrowed a GameCube controller from my brother-in-law so that I could experience my childhood once more. Note that this was the first time since I was thirteen (at the time I was twenty-one) that I had experienced Ocarina of Time‘s Hyrule and rolled around trying to save everyone. I was ecstatic; I saw Navi flying around Kokiri Forest bumping into the fence post, and my smile grew three sizes. Then I inevitably had to control Link. This being the first time I’d ever held a GameCube controller, forgive me for thinking it was a bit clunky. Having two joysticks caddy cornered from each other was a new experience for me, but I soon adapted. I was able to make my way through the Deku Tree without any problems.

Then came time to receive the ocarina. Nothing too special, except when I learned Zelda’s Lullaby and I discovered what I was in fo– the C-stick. It was a great invention, and I am sure it worked for the games it was designed for, but it made item use and ocarina playing a pain for me. I was constantly messing up the songs, unable to play the Sun’s Song in time to zap the Re-deads. Every time I pressed up C, I would detour around left and that note would register. It was a minor inconvenience, and nothing so pressing that I had to stop playing. I was able to complete the child timeline easily and get past the Forest Temple; I would have finished the game on this controller, had I not needed to return it.

My only complaint, aside from the C-stick, is the harsh edges of the GameCube controllers. It caused the bones in my hand pain after only a few hours. I know I just excused the Nintendo 64 controller for a similar reason, but at least the N64 only caused pain to your thumb, not your whole hand. But as we will see later on, Nintendo remedied this. 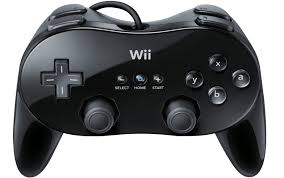 I don’t think there are enough words in the English language to express my utter hatred for the Wii U’s Classic Controller Pro. All the pictures I have featured here are of the exact type of controllers I used to play, so I was able to use the Classic Controller Pro with left and right handles. But that doesn’t excuse this cheap piece of hardware. I understand this controller being used for classic Nintendo games such as Super Mario Bros. 3 or even The Legend of Zelda, but adapting this inferior controller to N64 titles was an insult. It has no C buttons. All of the buttons are the same color (something that previously wasn’t part of the Nintendo controllers’ design schemes). There is no size difference between the B and A buttons. And to top it off, THERE IS NO INSTRUCTION MANUAL ON WHICH BUTTONS CORRESPOND TO WHAT FOR OCARINA OF TIME. I constantly used deku nuts when I wanted my slingshot and Queen Gohma killed me three times because I couldn’t lock onto her. Somehow I managed to make it to Dodongo’s Cavern where the Lizalfos promptly killed me. I put the game down and didn’t pick it back up. Without expressing too much negativity, I detest this as an Ocarina of Time controller, and should be stricken from the record as having ever been an option. 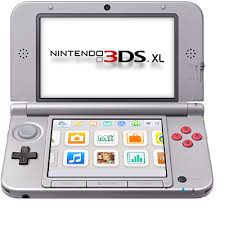 I recieved my NES Controller themed 3DS last October, and my first game was Ocarina of Time 3D. I was so excited to play it. I booted up my game (if you are interested in the little surprise I received when I got my used game, go here), and as we all know, this was the first port to be completely remastered for its new controller scheme. Now when you play the game, you have a similar controller to the Classic Controller Pro, but you also have correspondence as to where your items are. B and A are used for their traditional attacking and the sword, and your available inventory is downsized from three to two (four if you count the I and II buttons, but I’ll talk about them in a minute). Z-targeting is renamed to L-targeting, and I was able to quickly adapt to the new fighting style– getting past the first dungeon was a breeze.

The advent of the touch screen was a plus and a minus for me. On one hand, taking my fingers away from the buttons in order to press I and II was tedious and usually resulted in me taking my eyes off the game. I found myself constantly placing items I didn’t need much, such as Din’s Fire, on those buttons so that I wasn’t forced to use them as much. Conversely, I absolutely loved the touch screen for the ocarina. If you couldn’t remember the songs, you can just pull up every song on the bottom screen. Also, the touch screen controls made getting the frog heart pieces a cinch. You can use your peripheral vision to play the ocarina, relying less on your memory.

I also wanted to touch on the gyro controls. Most of the time I hate gyro-motion, but I really love it on a handheld. I found using the bow and arrow so much easier when I could make small adjustments with my arms instead of a button press. Definitely a plus, and something I was really glad to see used in Majora’s Mask 3D. 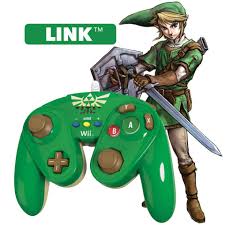 I actually got lucky at a Game Stop in my area lately. They happened to have one Link Wii U Fight Pad Controller in stock. I snatched it up and rushed home to try it out on Ocarina of Time. Now the game had a chance to redeem itself from that horrible experience I had with the Classic Controller Pro, and I eagerly went to relive my adventures as the Hero of Time.

Upon opening the box I was pleasantly surprised. The pictures on the internet have done zero justice to the beauty of this Fight Pad controller. It is curvy, glossy, and feels wonderful in my hands. The shoulder buttons are curved for comfort, and the main buttons are smoother and easier to recognize. The only downside to the actual controller is that the curvaceousness adds bulk, making wrapping your hands around the device a bit challenging.

Gameplay, I found much smoother this time around. The controller scheme was the same as the GameCube’s, opting a C-stick or the X, Y, and Z buttons for item use. Having the shoulder Z button as the down C is convenient, and I tend to place my projectile weapons on it for easy access (Note, this is something that could be done with the GameCube controller but I didn’t take advantage of it at the time). I still have the same issue with the ocarina, playing notes that aren’t even there, but my muscle memory got easily back into the groove.

If I were to have one complaint, it would be that the controller has to be plugged into a Wii Remote. I wish they had made the Wii U Fight Pad controller work similarly to the Classic Controller Pro for the Wii U, having its own battery and such, but we can’t win them all.

If you asked me to rank from my favorite to my least, it would be: Nintendo 64 controller, 3DS system, Wii U Fight Pad controller, GameCube controller, and finally the Classic Controller Pro. The N64 and 3DS have the advantage of the game being designed around them, earning them the top spot easily. The GameCube and Fight Pad controllers aren’t a far cry from the Nintendo 64 controller, so I would definitely recommend using them if you are playing virtual console or on the GameCube port. If you absolutely have too, you can use the Classic Controller Pro, but I warn you: it may make you hate this game. Whatever the medium, Ocarina of Time is a timeless classic that deserves all the praise it gets. I can confidently say that I have enjoyed 90% of my play throughs with the game, and encourage you to try these different control schemes and see how they feel for you.

What controllers have you played Ocarina of Time with? Do you have some different opinions you would like to share? These are just my experiences, so I would love to know what you guys think. Start up a discussion and find out other people’s opinions in the comments below!