HORI, who recently announced to releasing a Gold Zelda MK8 wheel, is also set to release a golden Game Cube inspired fight pad for the Wii U. It is similar to the already released green Battle Pad, but has several new features. Hit the jump for release date and more information on this great addition to the Wii U hardware lineup. Kassye Butler26 year old mother of 2 future gamers. Currently pursuing a degree in Business Administration with a focus…

Regarded as the most beloved game for the Nintendo 64, Ocarina of Time has seen three different ports and at least five different controller options through the years. Each new controller has brought with it a different gaming experience, and either enhanced or detracted from the original gameplay. I have had the privilege of experiencing Ocarina of Time on all of its ports, and decided to give my take on how each controller handled the game and changed my overall…

3DS Owner Mods His 3DS To Work With A GameCube Controller

Super Smash Bros. for 3DS has been released in Japan for almost a month now (and it’s nearing it’s release in North America), and Japanese fans have found many reasons why owning Super Smash Bros. on their 3DS could result in good, or bad things. Recently, a 3DS owner decided that he needed another control scheme, and rigged his 3DS to work with a GameCube controller. Hit the jump to see more! Liam OrthHeyo. My name’s Liam! And I’m a huge…

It’s Happening: 3DS Can Be Used as a Wii U Controller for Smash Bros. 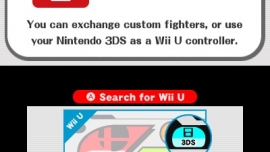 Many of you may not remember, but way back before the Wii U launched it was suggested and even hinted by Nintendo that the 3DS could, theoretically, work as a controller for the Wii U. This of course hasn’t happened to this point, and, since it was just a theory, there was no reason to think it was something Nintendo wished to explore. Apparently that is no longer the case, at least when it comes to Super Smash Bros. for Wii U. You will be able to connect your 3DS and use it as a full on controller for the game…

Gossip Stone: How Should Zelda Wii U Utilize the Gamepad?

Any Zelda game is typically based on two great mechanics, puzzle solving and combat. Zelda producer Eiji Aonuma has already stated in a recent interview with Kotaku that puzzle solving in Zelda Wii U will drastically differ from the typical block sliding and torch lighting exercises. On the other hand, GameExplain has released a Zelda Wii U Trailer Analysis seen here and the most important piece of information related to combat is the fact that Link’s sword is holstered on…

If you’re anything like me, you’ve been praying that The Wind Waker HD would have Pro Controller support pretty much ever since it was announced, and thankfully, Nintendo is happy to oblige. Nintendo has confirmed that The Legend of Zelda: Wind Waker HD will allow players to use the Wii U Pro Controller in place of the Wii U GamePad if they so desire. While this will mean the loss of the convenient features afforded by the GamePad’s touch screen, I’m sure I’m not alone in being happy about this report.

In the same report, Nintendo also revealed just how much space The Wind Waker HD will take up if you download it onto your console rather than buying retail, and that number is 2.6GB. That probably doesn’t seem like much to you for an open world adventure game, but keep in mind that this is a remake, not a full-fledged original Wii U title, so the fairly small size isn’t that surprising.

Nintendo also confirmed that The Wind Waker HD will the support Linear PCM 5.1ch surround sound, and they reconfirmed that the game will run in crisp 1080p resolution.

Just in case you forgot, The Wind Waker HD will be launching in North America sometime in October and on October 4th in Europe, preceded by its September 26th release date in Japan.

You might have noticed that for the past few days, the Golden Nunchuck accessory from Club Nintendo has been sold out. Fortunately, Nintendo has come forward confirming that it will be making a return in the future. We just have no idea when. After seeing the golden Wii Remote that was bundled in a special edition of Skyward Sword, many fans were upset that there was no golden Nunchuck controller to compliment that. A little while after, we saw a fan-painted…

Many people say that all of the best of the best Zelda games came out on the Nintendo 64 console with the release of Ocarina of Time and Majora’s Mask. A great many people count both Ocarina of Time as their favorite game, while quite a few would say Majora’s Mask is, like myself. It is always great to go back to the old N64 and pop in my favorite Zelda game to pass the time. However, have you ever…

Okay guys, here’s the video I promised last time. This is a video discussion about a control scheme compromise I’m proposing for Zelda Wii U. You can watch the video here or check out the video embed after the jump. As you probably know, Nintendo’s talked about using Wii MotionPlus again in the next console Zelda game, and I’ve also made a prediction that they’ll do this. However, recently Miyamoto suggested they will be changing the controls based on feedback…

Are you one of the fans that to this day still play Ocarina of Time or Majora’s Mask on the Nintendo 64? If so, we have something very unique for you. YouTube user zoxsk8 has created a custom golden Nintendo 64 controller. Aside from the sparkling gold paint the controller features the Hylian Crest underneath the Nintendo logo above the start button and even has a golden connector. As a designer of several different custom controllers, zoxsk8 left out no…

Another spin around the sun has come and went, and with it, the latest installment of Zelda Dungeon's proudest yearly tradition: Best. Zelda... read more