Posted on November 25 2021 by Joseph Berlinger 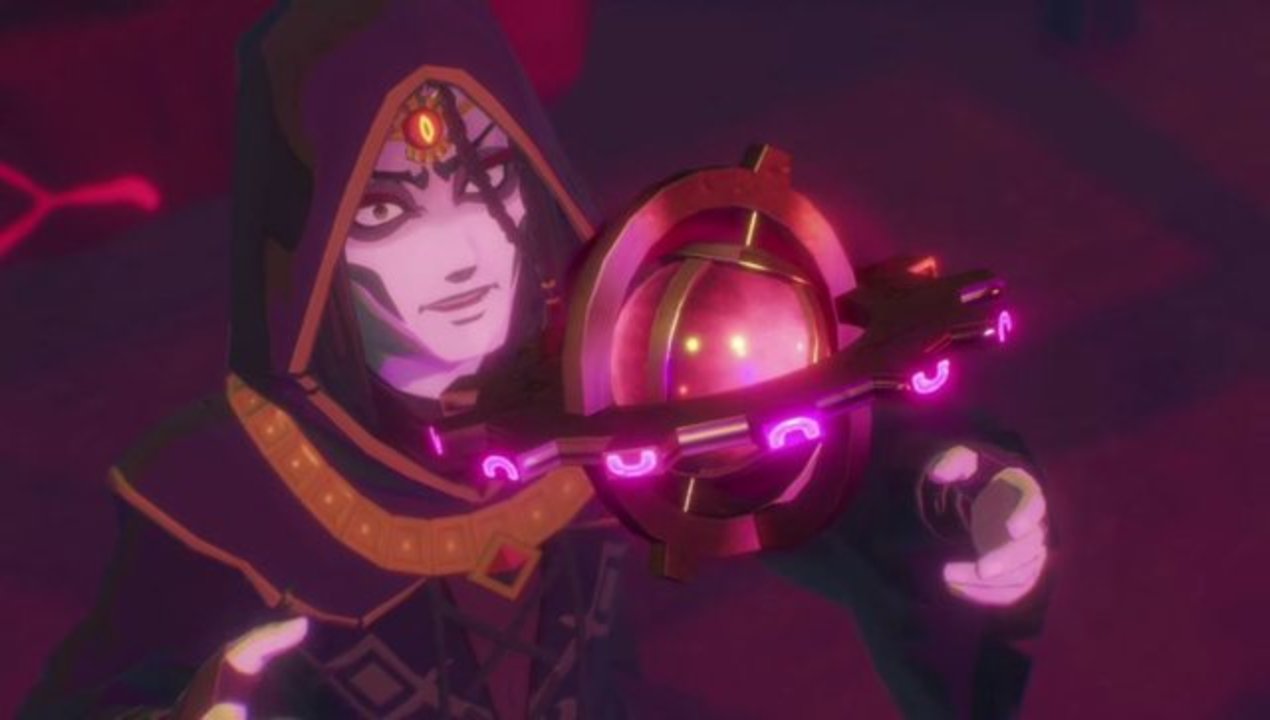 Warning: This article contains spoilers for the DLC story and characters for Hyrule Warriors: Age of Calamity.

In a recent interview with Japanese publication Nintendo Dream, the development staff of Hyrule Warriors: Age of Calamity gave their thoughts on the design and production of the newly released Guardian of Remembrance DLC. The interviewees consisted of Art Director Yuu Ōboshi, Producer Yōsuke Hayashi, Director Ryōta Matsushita, and Developing Producer Masaki Furusawa, all of whom are staff members of Koei Tecmo Games. One particular portion of the interview focused on the inclusion of the Yiga Clan in the DLC, as well as some new details about Astor, Age of Calamity‘s principle human antagonist.

One of the new story moments presented in Guardian of Remembrance depicts Yiga Clan general Sooga’s first meeting with Master Kohga. When prompted about the cutscene, Director Matsushita stated that the first-person perspective was a deliberate choice in order to preserve Sooga’s identity. The staff chose this method of storytelling to ensure that the Yiga Clan’s mystery would not be diminished during the short scene:

Matsushita: That scene takes place at the time of his childhood, so really his face would have to have been exposed. But somehow, revealing his face just for that reason felt wrong… so that video went to a first-person perspective. We recognized that his mysteriousness could be preserved to the bitter end that way.

While I personally would have liked to see who Sooga is under the mask, I can agree that revealing that information in such a short scene would have felt half-baked. Instead, the cutscene intentionally puts the focus on Kohga to provide Sooga with some character motivation.

The interview then shifted topics to the Yiga Clan’s ally Astor, a seer who labored to bring about Ganon’s return to Hyrule. There is a great deal of mystery around this figure, and Matsushita was asked to provide more information about him:

Matsushita: Naturally. I think the Yiga Clan has a different appeal than that of the Hylian faction. I think those stories turned out to be something that can give people even more fondness for those you said — Master Kohga, the Yiga Clan General, and others — so I definitely would like people to try it out!

Hayashi: It’s true that we had established the character for that fortune-teller [Astor] to a considerable degree in-house, but in the base game, it ended up with almost nothing being said about him.

When pressed to elaborate further on Astor’s backstory, Matsushita deflected the comment with a joke. One could take Hayashi’s statement above to mean that Astor’s character and backstory were more fleshed out during Age of Calamity‘s development than what was seen in the final game. Seeing that the circumstances of that backstory remain one of the game’s biggest unanswered questions, we certainly hope that the developers will share some of those details in the future.

Developing Producer Furusawa chimed in to say that the character was left a mostly blank slate to correspond with the narrative style of Breath of the Wild. He wants players to use their imagination to fill in the blanks rather than revealing it all outright. Matsushita added a closing thought that this fortune-teller should serve as a springboard for players to come up with their own plausible rationalizations for why Astor acts in the manner that he does:

Furusawa: This also follows the same syntax as Breath of the Wild, in that we intentionally leave room for our players to all form their own different imaginations and impressions, without revealing all the mysteries.

Matsushita: More than dispersing all the mysteries, the fortune-teller instead was excavated into a character that serves to broaden the fun of giving more depth and breadth to those mysteries, expanding your imagination to think, “Huh, then that could also imply something like this…”

Personally, I appreciate the staff’s candor in the matter. But what about you? Were these the answers you expected? Let us know in the comments.

Comments
Sorted Under: Games, Hyrule Warriors Age of Calamity, News, The Legend of Zelda, Zelda News
Tagged With: No tags were found for this entry.