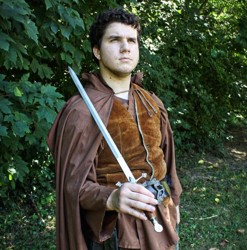 Hello, my name is Joseph.

Joseph has been playing Zelda games since the age of ten when his family borrowed The Wind Waker from a friend. He was captivated by the open exploration and stylistic expression of both the game and its characters. Since that time, he has played each console 3D Zelda title and picked up a few on the DS and 3dS. His favorite Zeldas are Twilight Princess and Spirit Tracks. Joseph’s passion for the Zelda series stems from his deep interest in medieval fantasy that was first piqued by Total Annihilation Kingdoms back in 2000. Since then, he has logged a lot of hours in Total War Warhammer 2 on Steam and recommends it to other fantasy aficionados.

Outside of video games, Joseph works as a photographer and videographer at a historic restoration company. He plays the mountain dulcimer and enjoys reading Brandon Mull, Fulton Sheen, and Brian Jacques. Joseph acts in local Murder Mystery theatre, and is a pontifical MC at his diocesan cathedral. His favorite movie is the 1993 Three Musketeers from Disney.

Joseph regularly posts is family’s restoration projects here, and you can shoot him an email at: plumtreeu@gmail.com