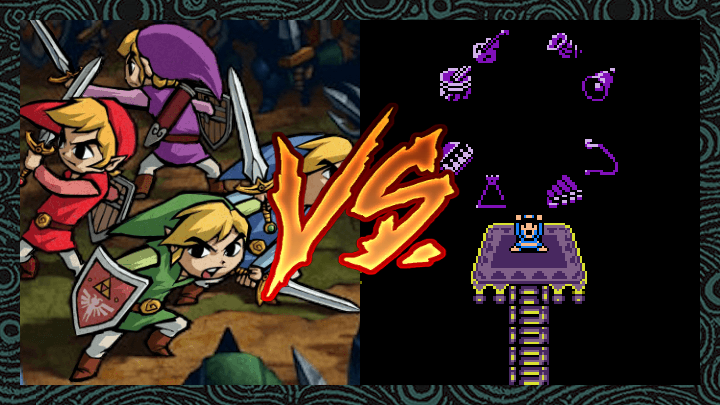 Our best soundtrack tournament continues with the first match-up of Round 2. After handedly defeating The Legend of Zelda in the previous round, Link’s Awakening is ready to take on Four Swords Adventures in our latest poll.

Some perceptive readers may have noticed that a handful of games, like Four Swords Adventures, received a bye in Round 1, meaning they automatically earned a spot in Round 2. This decision was yet another by-product of the intricacies of a 20-participant tournament bracket. Creating a clean week-by-week bracket was a bit of challenge with that particular number of games in the Zelda series, so some bracketing gymnastics was required to pull off everything effectively.

We knew that eleven games would receive a bye in Round 1, so we had to come up with a fair method to choose which ones. The method we ultimately decided upon was to use a random number generator to select the lucky eleven and place them in Round 2. Was the process absolutely perfect? No, but it was the best option we had given the needs of the tournament. Plus, we’ve got some truly epic bouts coming up this round, so you have that to look forward to.

In any case, some of you have shared some great suggestions for ways to improve Zelda Versus moving forward. We’ll definitely take those things into consideration next tournament. But enough blabbering outta me. Let’s get to the poll!

Despite its cooperative nature and unique level progression system, Four Swords Adventures actually shares a lot of DNA with A Link to the Past. The game’s locations, its character / enemy designs, and especially its music are tributes to the beloved SNES Zelda game. Classic tunes like the Overworld theme, the Hyrule Castle theme, and Princess Zelda’s theme are lovingly rearranged in Four Swords Adventures, and some of these songs had never sounded better thanks to the GameCube’s hardware. There are plenty of great original tracks too. Go listen to the game’s Lake Hylia theme or Staff Role theme, and you’ll know what I mean.

Link’s Awakening had no problem overcoming The Legend of Zelda and moving on to Round 2. Despite the original Zelda‘s iconic tunes, more than 200 voters voiced their support for the series’ first handheld adventure. As a highlight example for the musical beauty capable on the Game Boy, it’s no mystery as to why so many can sing the praises of Awakening‘s soundtrack. Fans were quick to point out hit songs like “Tal Tal Heights” and “The Ballad of the Wind,” which continue to strike a chord with players to this day. The support for this soundtrack may carry Link’s Awakening quite far in the tournament.

So, it’s time to decide which game had the better soundtrack: Four Swords Adventures or Link’s Awakening

Which Game Has the Best Soundtrack?

Comments
Sorted Under: Four Swords Adventures, Games, Link's Awakening, Original Content, Zelda Versus
Tagged With: No tags were found for this entry.