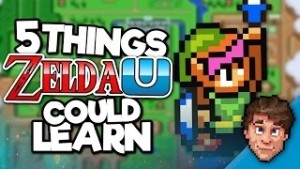 In a recent YouTube video by Zeltic, he listed five things that Zelda U could learn from A Link to the Past. The first point was to make the introduction sequence short and simple. The next point was to have the perfect difficulty that was not so hard that it made you want to throw the controller, but not so easy that you would breeze through it. He felt that the game should have lots of dungeons like A Link to the Past did. Another point was to have upgradable items such as the boomerang. His final point was to have a world that makes the player think in terms of where to go and how to get there.

Check out the video with the more detailed points after the jump!

The video brought up some great ideas for what could be incorporated into Zelda U from A Link to the Past. I agree with most of the points but I feel that the opening sequence doesn’t necessarily have to be short as long as it is interesting.

What did you think of the points mentioned? Drop a comment below sharing your thoughts.