Posted on September 23 2014 by Stephen Christopher 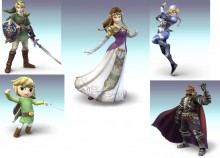 The October 3rd release of Super Smash Bros. is drawing close for Europe and North America. As most fans know, Link has been given a Fierce Deity costume for use in matches, but what about the other characters from our beloved series?

Gamnesia recently posted an article listing ALL of the characters featured in Super Smash Bros.‘ alternate skins. If you’d like to see all of the skins for every character, click here. Here are our beloved character’s skins:

Personally, with Link as my constant main, I’ll probably have the Fierce Deity skin most of the time. So which skins out of these do you think you’ll be playing as? Leave a comment below!