Sneak Peek at the Preorder Bonuses for Ocarina 3D in Europe

Posted on May 18 2011 by Nathanial Rumphol-Janc 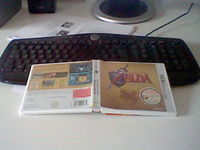 French gaming site FNintendo managed to get a sneak peek at the European preorder bonus package for Ocarina of Time 3D that we reported on Monday. The gold sleeve mentioned in the press release does indeed appear to be an alternate game cover that matches the American cover art – so this is definitely this edition’s answer to the “gold game” phenomenon that the series has been known for in the past.

The inside of the packaging is dotted with Rupee icons – a neat way to take advantage of the more environmentally friendly box. We also get a good look at the included poster, which of course includes the two most popular scenes associated with the 3DS remake: the dramatic Link vs. Ganondorf battle and the beautiful artwork of Hyrule Field. Check out the images in the thumbs below.View image