Posted on September 08 2011 by Mases Hagopian

A recent poll over at gamrFeed was posted the other day and it compares several of the highly anticipated games set to release in 2011. The original poll had options for Skyward Sword, Elder Scrolls Skyrim, Modern Warfare 3, Battlefield 3, Uncharted 3, Gears of War 3, Super Mario 3D and a few other highly anticipated games. Other than the fact that there was an obnoxious number of titles with ‘3’ at the end of them, the results looked for Zelda fans. Skyward Sword took the top prize with 36% of the votes!

Following Skyward Sword, Uncharted 3 game in 2nd place with 21% of the votes. Next on the list was the group of Other, consisting of more games with ‘3’ in the name such as Ultimate Marvel vs Capcom 3 and Resistance 3. Overall though given the relatively small number of people that voted in the poll (a couple hundred), I don’t know how accurate this is. Surely there is hype for Skyward Sword, but I would have thought there would have been just as much, if not more hype for games like Modern Warfare 3 and Battlefield 3, which will very likely outsell Skyward Sword. Either way, Skyward Sword looks to be golden for Nintendo when it ships on November 18th in Europe and November 20th in the US. 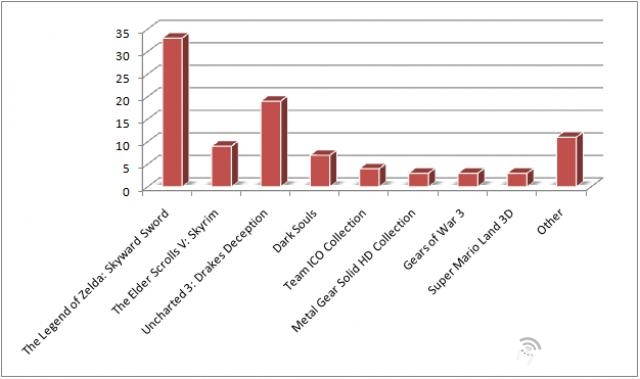