Interview with Tony Janning of The Legend of Neil 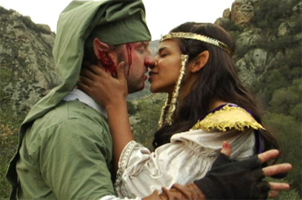 Nerd Reactor recently interviewed Tony Janning, who plays the main character Neil on the popular web show The Legend of Neil. The interview (here) does have some vulgar language so it may not appeal to some readers. Questions in the interview include everything from the production process, the success of the show, and how raunchy (or not) the show actually is. It’s a fun read and I recommend that all of the Legend of Neil fans give a quick read for some behind the scenes info and an insight into the show’s main character and star actor.

Here’s an interesting question posed by the interviewer at Nerd Reactor (and a fun reply from Janning):

Nerd Reactor: In the series’ ending, Neil and his brother are transported into the Mushroom Kingdom. A lot of fans are wondering if you and Sandeep are going to do Super Grimsley Bros?

Tony Janning: I can’t comment on that. We knew when we came up with that ending that people would be curious if it will ever happen. You never know. Never say never. The never ending story….something else with never.

Even in this quote we can see Janning’s humor. I would personally love to see the team take on another project, and in fact, Janning mentions a project that he’s currently working on. I know that many of us are fans of the show simply because it’s a Zelda series, but I actually do appreciate the absurd humor. From his fairy-girlfriend and how he enters the game, to the extreme level of parody: it’s all hilarious, but it’s not all just poking fun. The makers really did create some original characters. Neil is a sort of jerk with a soft spot of princesses, and even though his motives aren’t exactly those of a white knight, he still get the job done: he saves the princess and keeps us viewers wanting more. Did you enjoy the series? Do you want to see Super Grimsley Bros? or would you prefer Adventure of Link? Let us know in the comments.