Gossip Stone: What would a more “mature” Zelda game be like? 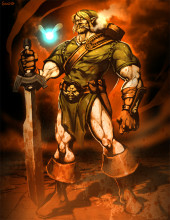 If a franchise lasts as long as Zelda does, you’d eventually need to mix things up a bit or fear stagnation. Gameplay wise there have been a lot of different things, for better or for worse: boats, trains, time loops, physical transformations, time travel, alternate worlds and many more things have been used to keep every Zelda game fresh. The same goes for stories: the more simplistic ones in the original and the GameBoy games, the more complex ones like Ocarina of Time and Wind Waker, the upbeat and optimistic Spirit Tracks and the darker Majora’s Mask and Twilight Princess. There exists a group of fans who call for more games like that, taking the series to explore darker and more “mature” themes. But what are these themes and how should the series look at them? Read more after the break!

The obvious, simple and dumb way of doing things would be the classic “darker and edgier” route. Link as a big muscle-bound slab of beef, Ganondorf as a big mountain of a man towering over Link and Zelda as a voluptuous bimbo with a body that is not physically possible without magic and wears at best an outfit made from a third of the amount of fabric that goes into one of her normal dresses. Such a game would involve a lot of blood and gore (no green blood for you this time, Ganondorf!) spraying from the stumps of the limbs that Link severs, alongside rather disgusting beasts for him to slay. It would involve Link actually talking and even swearing in ways that would give a normal person pause, using his deep gravelly voice to spout over-the-top one-liners, cynical remarks and nasty comebacks when facing enemies. People would be overly angsty, tortured (either physically or mentally), the setting would be a lot darker and EVERYONE would have some kind of troubled past. And of course such a game would end with the credits being the backdrop for Link and Zelda doing things together that you would normally only see in fan-made images, fanfiction and animations posted in the darkest corners of the Internet.

There’s a rather big chance that you do not want to see such a game because it goes against everything the Zelda series is. Even disregarding that Nintendo would only allow such a thing if their excess of money drove them all insane, the entire fanbase would go insane over the existence of such a game. It’d be called juvenile and needlessly edgy. 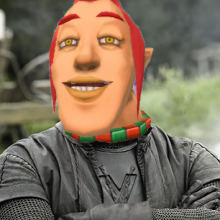 Another way to do it wrong is to deconstruct the series. This means when you take a part of the series and nitpick at it, showing what the real-life consequences of Link’s actions would be. He’d get into trouble for breaking into people’s houses and smashing their pots, face the wrath of more than just the cuccos when he attacks them and the dangers of using explosives in places you should not. But this could also include the bigger things. The Adventure of Link ended with Link’s awakening of a Princess Zelda who had been asleep for centuries, if not more. The game plays it as a joyous moment and Link gets a kiss (one of the few he’s ever gotten), after which the game ends. What The Adventure of Link does not mention is that there are now two Princesses Zelda running around: the “current” one and the Zelda of before. Both of them have claims to the throne: one through merit of age since she was born centuries ago and therefore is closer in blood to the founding members of the Royal Family, while the other knows about the current situation of Hyrule and of its people. In a deconstruction this would end up in a succession crisis and maybe even a civil war between factions gathering behind the two Zeldas. Link would be forced to pick sides, turning against one of the Zeldas. It’d be a light version of A Song of Ice and Fire, except there’s no Groose Bolton running around and flaying people.

More horror comes from thinking too much about certain things. For example, Ocarina of Time had a civil war take place a decade prior to the events of the game. Yet there are not a lot of people for the people of Hyrule Castle to go to war against. So either the war was merely inside the walls of Hyrule Castle Town or the enemy during this war was so completely exterminated that no trace of them remains. But this is of course merely guesswork and no real part of the story. None of the options so far present a “mature” Zelda game, so what would a game like that be like? 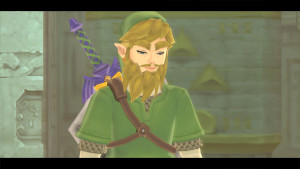 Maturity can mean a lot of things, yet most have to do with being able to take care of yourself: both in your everyday routine and when problems arise. Defying the threat of the dark, standing valiantly against the hordes of evil and defeating them with a mix of power, wisdom and courage is not exactly something Link does every day (except if you’re the Hero of Legend, who has done this kind of thing four times), so it’s him being able to deal with the problems he faces during his journeys. This does not just cover the physical ones like monsters, dungeons and puzzles but also being able to deal with hardships. The most common ones in the series are the deaths or departure of someone close like Link’s Uncle, Prince Ralis’ mother, Fi, the King of Red Lions and more. Others include themes like a peaceful situation ending and putting the people including the royal family into danger, for example Midna’s kingdom, the hardships Zelda went through in Ocarina of Time and the darkness befalling Hyrule in A Link to the Past.

But the Zelda game most dealing with maturing and personal growth is Skyward Sword. Zelda and Link start out as average teenagers, oblivious to their destinies. Link’s a lazy daydreamer and Zelda tries to get him out of this mentality: when through effort he wins the Loftwing race she’s noticeably proud of him. When Zelda gets taken by the forces of evil and is taken under Impa’s wing she quickly accepts her new duty to protect the world from Demise. Link meanwhile does everything he can to rescue Zelda, enduring all kinds of danger and facing hordes of monsters. While initially he’s not interested in anything else than saving Zelda, eventually he too accepts his duty and destroys Demise for good.

This kind of storytelling received far more positive fan reactions than any overly edgy story would. How would you handle this? Would you continue in the style of Skyward Sword and Twilight Princess? Or perhaps take a different route? Please share your thoughts in the comments below!