Gossip Stone: How Should Non-linearity be Handled in a Zelda game? 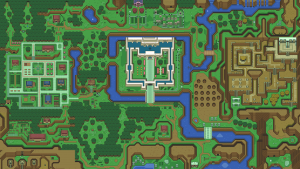 In the last few years in gaming, linearity has become something of an ugly word: it is considered bad design to have a linear game and players absolutely need freedom because it is thought to be better than a linear experience by its very nature. Given the immense success of linear games such as The Last of Us this is proven to be incorrect, yet the call for nonlinear games exists. In games such as the Zelda series exploration is an important part, with plenty of hidden treasure, items and Pieces of Heart strewn about. During your explorations you run into dungeons and temples in some of the games, but if the dungeon either has an obstacle in front of it barring entry or even worse, you discover halfway into the dungeon that you lack the item you need to complete it. So how should the series handle linearity? Read more on this after the break!

First off, note that nonlinearity is not the same as an open world. Just because the world is big and you can go anywhere does not mean that you can do things in whatever order you want to. Wind Waker had a sizable overworld you could sail around in at leisure, but you still had to unlock the tools you need to access the next part of the plot. Twilight Princess, while being called one of the most linear games in the series still has an open world to explore.

But how do you handle nonlinearity? The first option would be to take The Legend of Zelda or A Link to the Past way of doing things: a big open world where all the dungeons are accessible right away and you need to figure out on your own what both the possible (regarding to items) and desirable order of completing them is. In for example A Link to the Past you could theoretically enter the Dark World, get the Hammer from the first dungeon, the Hookshot from the second, the Cane from the Sixth, take a detour for the Quake Medallion and rescue Zelda first. While kinda sweet from a story perspective this does meant that you’re doing things in far from an optimal way. Some people claim it’s better to complete Misery Mire before heading into the Ice Palace because the Cane of Somaria allows you to skip a rather annoying part of the Ice Palace. 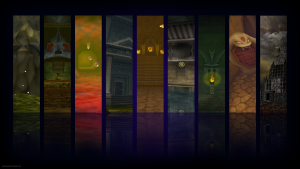 Ocarina of Time works more or less the same. Here there is an optimal order of doing dungeons, but it is quite possible to deviate from it. Even early on, if you obtain the Bomb Bag you can go blow your way through the rocks preventing you from entering Zora’s Domain and entering Jabu Jabu. In the second part of the game however you are given a choice: you can go to the Forest Temple first (which is recommended by the game), OR you go to the Fire Temple first and then complete the Forest Temple. Or if you get your hands on the Bow you can also give getting to the Water Temple first a shot. After you complete your first dungeon you can go get the Lens of Truth which you can use to get to the Spirit Temple or the Shadow Temple, plus whatever other dungeons you still have to go.

This minor sequence breaking also appears in Majora’s Mask, where you are required to have certain objects to enter the next area of the game. Some of these items include dungeon items: the Bow and the various arrows. Because of the amount of items you find in the overworld and that you need to go into several large dungeons to get the item you need to skip to the next one, it is almost not worth it to sequence break as you might as well finish the dungeon you’re in.

But of course, the unconquered king of nonlinearity is A Link Between Worlds. Here you can buy and rent the traditional dungeon items and use them to do the dungeons in whatever order you wish. The upside is that the dungeons are tooled to the use of one specific item and you use it a lot here, which is somewhat limited in quite a few dungeons throughout the series where you get an upgrade instead of a useful tool. The downside however is that you are limited in what you can do with a dungeon because you cannot predict which items the player has on them unless you force them to collect everything in advance, undermining the nature of an open-ended world. This also makes a more story-driven game difficult to make, given the sheer number of different ways you can complete dungeons and how this affects the story.

So how do you solve this? Many games have the dungeons grouped and divided by some method that prevents a player from entering the next group before they completed the first. For example, in Wind Waker you have to have completed Dragon Roost Cavern and the Forbidden Woods before you can access the Tower of the Gods and the next pair of dungeons, the Earth Temple and the Wind Temple. Wind Waker did have something unique here: you could go to Dragon Roost Cavern or the Forbidden Woods as your first dungeon in the game, and you could go to either the Earth Temple of the Wind Temple before the other without you running into any trouble.

By expanding on such a formula interesting dungeons can be made. Players both have the freedom to choose from a set of dungeons, and after completing these and going through an event to get to the next group there is a mix of freedom for the player and controlling which items they have when reaching which group of dungeons. If such a thing was attempted the number of dungeons per group would have to be matched to the number of groups: for example three groups of three dungeons, or maybe three of four. The risk with this is that the player might feel they have to jump through hoops to get to the end, which is not a good thing. 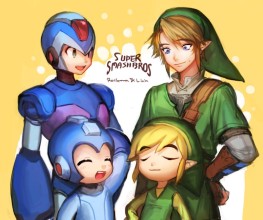 An untried option so far is the Mega Man solution. In the Mega Man series (both the Classic and the X series) the player is presented with a number of stages for them to complete. These can be attempted in any order, but there is a preferable order of completing them. This is determined by the weapon that you obtain from the boss at the end of each stage, alongside the occasional tool you get during certain levels. In your first playthrough you will not be aware of this, committing to trial and error gameplay and dying a lot (the Classic series is especially known for being rather difficult). In subsequent playthroughs you might be more aware of what awaits you and choose from there.

The Legend of Zelda could try something like this. Have a set of dungeons available from the start that each can function as a first dungeon, each with their own item for Link to find and use. This item is then used against the boss as usual. But for an extra bonus, have this item be useful in a next dungeon as well without requiring the player to have it to complete it. Have the item be used for shortcuts, or for finding extra hearts/rupees/consumables/fairies/whatever.

Some of these options could also be combined of course. Have the extra item utility combine with possible sequence breaking, or combine the sequence breaking with the grouped dungeon system. Which option do you like the most and do you like to see in a Zelda game? Or perhaps you prefer the more linear structure? Please vote in the poll and share your thoughts in the comments below!