Posted on November 26 2014 by Fernando Trejos 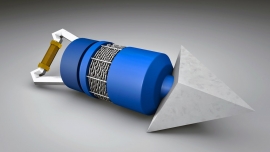 Game Theory‘s MatPat has recently posted a video looking at the hookshot and longshot through a scientific lens, trying to figure out exactly what effect it would cause to the human body if used. The video is fascinating, and really has quite a gruesome ending; I never could have imagined the hookshot could be so horrible, it just looks so awesome.

As it turns out, the force it would take to shoot the hookshot (which weighs more than 85 kilograms) would leave Link incapacitated for life in more than one way, including ripping apart his vertebrae and breaking every finger in his hand… essentially, it’s not very nice.

Game Theory constantly posts analyses like this, coming up with great theories for different aspects of all kinds of video games, both on the scientific side, and the more figurative one. They’re the one’s that made that “Link is Dead” theory for Majora’s Mask that literally tore the fanbase apart last year; it’s one of my favorite theories and I remember the shitstorm it caused, and it wouldn’t even surprise me if it were true, considering how unbelievably sad the game is already.

What do you think? Is it cool, or do they look into it way too much?