Posted on September 06 2019 by Heather Beard 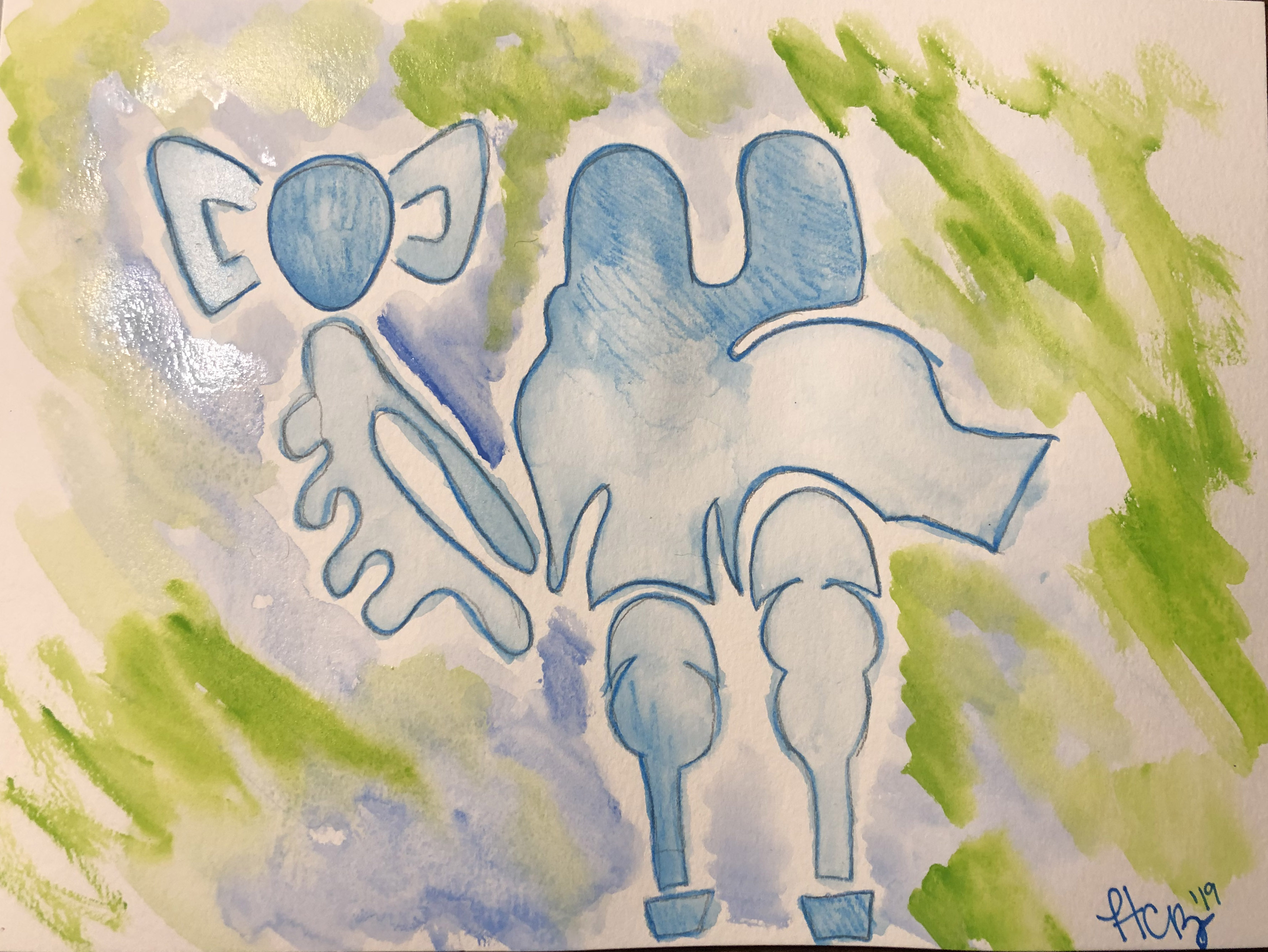 My entire life moved like the shifting sands of my beloved Gerudo Desert; fiery in the day and icy in the night. I had become known for my possession of a great fury, but I like to think that I lived a peaceful life before the Calamity. Eventually, I came to know a ‘little bird’ and I grew to love her greatly. I believe this powerful feeling began with the love of my homeland and the people within it.

My people have prospered for generations and many women before me have worn the title of “Chief”, as will many women after me. We are a race of warrior women, passionate and strong. Once a century, a male was born to our people and he would then become king. A Gerudo male had not reigned for some time, and like my mother before me, a female reigned. We have prospered among the barren desert sands our entire lives and we will continue to do so until our time here would end. Our culture is rich, our history is vast, and we thrive. We are the Gerudo.

In the days before the great Calamity, I befriended the Queen of Hyrule. It was another warm day in Gerudo Town when I was notified of her visit.

“Lady Urbosa, the Queen of Hyrule seeks an audience with you. She says it’s urgent,” my aid bowed after speaking, and brushed her fiery red hair aside. Her skin was tanned and her body adorned in golden jewelry like most women here.

“Thank you Ibira. Please show her in,” I stood up from my throne and awaited the presence of the queen. In a sense, I was the Queen of the Gerudo, even though they called me Chief.

“The Queen of Hyrule.” Ibira announced, bowing after the introduction.

“My dear friend, what brings you to the sands of the Gerudo Desert?” I asked and bowed. Despite being royalty myself, I respected the sovereigns of Hyrule and my friend.

The queen bowed her head in return, “I realize that I said that it was urgent, but I wished for you to meet my newborn daughter.”

She brushed her golden hair from her eyes and gestured to a group of women behind her. A lady in waiting approached us and handed a bundle of blankets to the queen. She moved the blankets aside and a small tuft of blonde hair fell out, “This is Zelda.”

Zelda. The tiny princess slept, but I could sense great power from her. In her sleep she smiled and I prayed to Hylia that she was having pleasant dreams. Her tiny smile reminded me so much of her mother. “Zelda is sure to grow into a dignified and beautiful queen some day.”

“Thank you my dear friend, but beauty is fleeting,” the queen replied as she smiled down upon her child. “I only wish my little bird one thing: that she be blessed with true happiness. I pray that the Goddess give her that.”

The queen looked upon her little bird with an unconditional love like I had never seen. I looked at the tiny princess again and she began to stir, her eyes opening wide. They were greener than the fields of Hyrule. Zelda. How I cherish this little bird already.

The sands shifted over time and the queen and I remained in close communication. Through our letters and visits, I watched as Zelda grew in her beauty, but I also watched as her mother slowly began to decline. My dear friendspoke often of her little bird and how she wished to visit our great land again. The queen enjoyed many Gerudo delicacies, and she wished to share them with Zelda. But eventually our visits became scarce and soon enough our letters became shorter. I began to fear as I knew the tueen’s health had been on the decline.

As chief I was well versed in the Hylian language, but the words of this last letter brought me great sorrow. They were not in the elegant script of the Queen of Hyrule, but in someone who was not familiar with me.

“Lady Urbosa…” an aid interrupted my reading. I was not in the mood for conversation. It was time for me to leave.

“Please prepare for my departure. I must arrive to Hyrule Castle at once.” I instructed, reading the letter again.

My aid disappeared and I was left alone. Very few times in my life had I been brought to tears and now I shed a tear for my dearest friend.  I prayed wholeheartedly, “Dear Hylia, may your blessings fall upon her spirit, and may your blessings shine upon my Little Bird.”

My journey to Central Hyrule was solemn. Our traveling party spent many hours in silence as we traversed the roads leading into the heart of the land. The colors of central Hyrule were far different from the soft browns and sepia’s of the desert. Any other afternoon I would find them beautiful, but today they were just as bleak as the sorrow in my heart.

“My lady…” a younger Geurdo woman addressed me. She rode up next to me and pulled her veil down from her mouth to continue speaking, “We shall be arriving soon. Shall I send ahead to make them aware of the Gerudo Chieftess’ arrival?”

“No. I would like to arrive without the pomp and circumstance.”

On any normal visit I would be welcomed grandly, as I was royalty myself. Today was different. I would not take away from honoring the memory of my dear friend.

Upon arrival at Hyrule Castle I was greeted by guards. Our race stood much taller than the Hylians, and to most soldiers I would look intimidating. Not to the Castle guards though. They were unphased by my domineering presence, but they acknowledged me and allowed us entrance inside the castle walls.

The castle was large and towering. It was a beautiful addition to the rolling green hills and plains that covered the land. The spires reached towards the sky as if they were trying to reach up to Hylia. Gardens speckled the castle grounds and a moat with a river flowed peacefully. The staff was usually bustling around at this time of day, but everyone seemed solemn. The colorful royal flags that waved in the soft breeze were missing and a sense of happiness was gone from these grounds. The queen was dead and her people were gripped in the hold of sorrow.

“Lady Urbosa, Chief of the Gerudo.” said King Rhoam Bosphoramus Hyrule. “I welcome you again to my home.”

His face was full of grief. A man whose love was suddenly lost to him. A golden crown at upon his head, and flecks of white had started to appear in his pale brown beard.

“Rhoam, it is so nice to see you again,” I replied, taking his hand and bowing my head as a sign of respect. “I do wish it were happier times…”

“I still have a hard time believing that she is really gone. Most nights I wake in disbelief because I miss her so.” The death of his queen had aged the king. He wiped a tear from his eye. “I know you share in my sorrow my friend. The queen loved you so.”

I felt another tear daring to escape, but I stayed strong, “And how is young Zelda?”

King Rhoam sighed, “At the tender age of six I don’t believe she fully understands. She was aware of her mother’s sudden sickness, and she is aware that her mother is gone. I have hesitated to speak much with her on the subject. I never expected to become a widower and never-the-less raise our daughter on my own.”

“Her little bird must have grown so much from this experience…” I replied.

The king had begun to guide us inside and as we talked, we arrived in the grand atrium of the castle. A golden casket emblazoned with the Hylian crest was displayed in the central area of the room. Engraved flowers danced along the sides of the gold plating. The air was full of a sweet aroma of fresh flowers that sat around the golden coffin. The Queen of Hyrule lay motionless inside. She was dressed in a royal blue gown that glittered with white and gold adornments. A thin gold crown rested upon her forehead. Her slender hands were folded around a single fresh blue and white flower. My dear friend merely looked like she were having peaceful dreams, but I knew she would never wake to greet me with her beautiful smile. Even in death she was beautiful.

“May I have a moment, Your Majesty?” I asked Rhoam.

“Oh course. I must prepare myself and Zelda. Should you wish to freshen up from your long journey, a maid will show you to your chambers.” The king smiled before he spoke again, “Though I’m sure you know where they are.”

As the king made way into the belly of the castle, I spent moments alone with my friend for the final time. A few staff members hovered nearby, but it was only a formality. In my eyes, we were alone.

“My Queen… my friend. Your sudden passing has brought me great sorrow. Your family and your people share in that sorrow,” my tears flowed freely. “To you and to Hylia I make this vow. I shall protect your little bird with my life. It is my honor as a Gerudo…” I inhaled and my voice broke, “…and as your friend. I will protect her.” I looked upon her golden hair, her subtle smile, and the flower closed in her hands.

“Excuse me?” I replied, hurriedly wiping my tears.

“I apologize, My Lady,” one staff member advised. “Silent Princess is the flower. It is Princess Zelda’s favorite, as it was the queen’s.”

A Silent Princess — a silent queen. It only seemed fitting for the occasion. Upon admiring the flower I noticed how perfect a flower it was for the queen; slender petals and bright blue mixed upon the soft hue of the white. The Goddesses had captured the essence of my dear friend in a single plant, and it would be a living memory of her time here on this land.

I could hardly listen as the priest spoke during royal funeral for the queen. My mind was flooded once again with memories, but it was my eyes that I could not keep focused. I peered through tears at the little princess. Her golden hair stood out amongst the royal clad crowd and she wore a similar blue dress to her mother’s, and a small tiara adorned her head. Her green eyes showed no signs of tears or wavering.

I marveled at how my little bird had grown. I watched as the young princess bid her final farewells to her mother. The last time I saw young Zelda, she was full of life and emotion as we played inside the castle grounds. She was only five, but the difference a year must make in the life of a princess. As Zelda looked upon the casket she held her head high. I could not hear the words she spoke, but in all of this grief, she carried herself like a true princess. Zelda’s green eyes told no lies though, and I began to harbor a deep fear of what this grief might do to her.