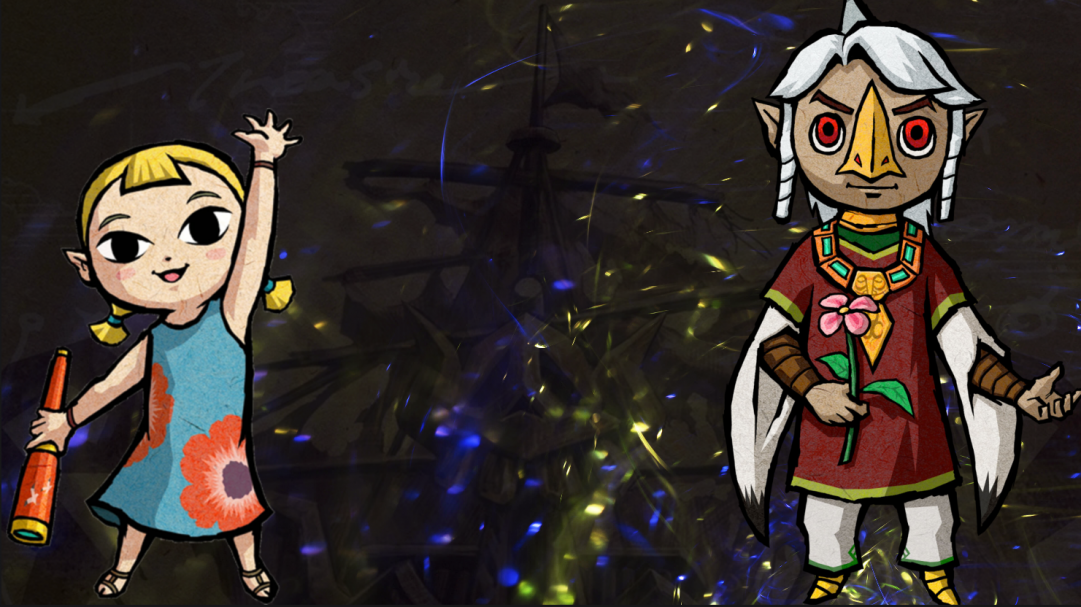 Aryll’s hands shake, and her mind races. If Tetra’s in trouble, that means Brother is too! She quickly folds the letter and shoves it in her trouser pocket. She swallows and focuses on taking deep, measured breaths. Don’t panic, don’t panic… she tells herself as she subconsciously wrings her hands together, her eyes darting over the horizon line.

“Aryll?” Grandma calls hoarsely from the porch. Aryll jumps and nearly drops the bottle at the sound of her voice.

“Coming!” Aryll waves and steps out of the water and slips her sandals back on. The rest of the afternoon is a blur. She’s unfocused as she helps her grandma fold the laundry and prepare supper, and her mind always wanders back to the crinkled letter stuffed in her pocket. Long after the moon reaches its highest arc in the sky, she can’t sleep. Tossing and turning, question after question enters her mind. Did they get shipwrecked by a storm? Or a Big Octo? Is he okay?

Aryll quietly climbs out of bed with an exasperated sigh, reaching under her bunk for the stashed roll of blank parchment. I guess I won’t be getting any sleep tonight, no matter how much I lay here, she thinks. Preparing her quill and ink next to the window, using the moonlight to illuminate the parchment, she stops and listens for a moment. Grandma’s breathing is slow and steady. Aryll’s heart aches at the thought of her brother in danger and how Grandma would react if she found out. Steeling herself, she begins writing her letter to the only person she can think of to help her now.

The palm trees sway gently with the cool breeze as Aryll carefully unlatches the lock on the door and steps outside. Her feet barely make any sound as she crosses the dirt path and drops the letter in the mailbox. She takes a deep breath and looks up at the twinkling stars. Aryll hopes that, wherever her brother is now, that he is safe and can see the same stars, too.

The speckled piglet — named Portia, according to Zill — squirms in her arms as Aryll trudges up the hill to Abe’s house, her legs burning from exertion after running up and down the hill to fetch the rowdy piglets. She pulls a handful of bait out of her pouch and holds her hand under Portia’s nose. Aryll giggles as Portia snorts and devours the food out of her palm, and for a moment, her squirming subsides. Once she reaches the top of the hill, she gently sets Portia down on a patch of grass in the pen along with the other piglets.

“There you go,” Aryll says cheerfully. The enormous black pig named after her brother, eyes silver and milky from old age, follows the sound of her voice and slowly walks towards her.

“Hi, Link,” Aryll says softly while gently patting his head. He snorts contentedly in reply. I wonder if he remembers who he’s named after… She rubs his ears for a minute — his favorite spot — before he turns his head away to sniff at some weeds growing along the fence. Brushing off her trousers, she walks up to the front door and knocks a few times.

“Come in!” Rose’s booming voice calls from inside.

Aryll forces the heavy wooden door closed behind her and enters the kitchen. “Portia was the last one, they’re all back in the pen now.”

The smell of toast and jam wafts through the house, and the stove is cluttered with pots and pans. Rose dries her hands on her apron and tucks a strand of her graying hair behind her ear. She rests her hands on her hips and smiles, “I don’t understand how the little buggers always manage to escape! Thank you, Aryll.”

“You’re welcome!” Aryll chirps. “Do you need help with anything else here?”

“No! Supper will be ready right at sunset, not to worry!” Rose laughs and turns her attention back to the stove. Seeing the state of the kitchen, Aryll shakes her head at Rose’s declaration.

Well, at least she didn’t try giving me more Rupees again… Aryll thinks as she steps out of the house and into the bright sun.

She scans the sky for any sight of the Rito postman and sighs. Don’t be impatient, it’s okay. It’s only been a couple of days, and Dragon Roost Island is literally across the ocean… Aryll reminds herself.

On her way back to Grandma’s house, Aryll’s surprised to see not just any Rito standing next to the mailbox. The future Rito chieftain, standing nearly as tall as the two bodyguards beside him, is dressed in dark red garbs and an ornate golden necklace. He smiles and waves when he sees her.

“Komali, you came!” Aryll runs over excitedly. Catching herself, she bows quickly, “Sorry! I should have bowed first.”

Komali gestures for her to stand and says, “You don’t have to bow, Aryll, we’re friends. It’s good to see you again.”

Aryll straightens and replies, “You, too. I’m surprised to see you so soon, though.”

“Well, your letter sounded urgent, so I wanted to talk in person.”

“Thank you. We should go somewhere private,” Aryll lowers her voice, eyeing the door.

“Lead the way,” Komali replies, gesturing for his bodyguards, Skett and Akoot, to follow.

Aryll considers going up to the Lookout, but can’t bring herself to climb the familiar ladder after so many years of avoiding it. So instead, she guides them to the other side of Outset Island, trudging up the steep path leading to the tallest cliff on the island.

“I know it’s quite a hike to get up here,” Aryll pants with each step as they approach the now dilapidated bridge, Komali and his bodyguards not far behind her. “But it’s the perfect spot to have a quiet conversation. We don’t get visitors to the Forest of Fairies anymore, so no one will bother us.”

The bridge creaks and swings eerily in the wind as Aryll peers over the edge of the cliff. Wow, I haven’t been up here in a really long time, she observes. Many of the wooden planks have broken and fallen over time, and the rope is frayed.

After the Demon King was defeated, many of the monsters that followed his command lost their aggression, so her brother cleared out the ones that remained and arranged to restore the bridge before he left. Tourists eager to see the Hero of Wind’s beginnings enjoyed visiting the forest and would even ask Aryll outrageous questions about her kidnapping.

But as peace came to the Great Sea, the Great Fairy and the healing fairies that once lived in the forest retreated as well. Over time, tourists lost interest in visiting, and Aryll and the islanders have always remained wary of the empty forest and its strange quiet. Now, the faded sign to the Forest of Fairies, once bright and colorful, remains as the only trace of Outset Island’s status as a tourist destination.

“I heard rumors that the fairies disappeared, but I never knew for sure. Things may be peaceful for now, but the Great Sea is far from safe. We could still use their help,” Komali says.

“Yeah…” Aryll sighs and rests her hand on the sign. First Brother left, and then the fairies, Aryll bristles at the thought.

Komali clears his throat, “About your letter… Did something happen to Link?”

Aryll nods and hands him the crumpled message. “I found this in a bottle a couple of days ago. It’s signed from Tetra, but he was traveling with her.”

“You believe he was shipwrecked with her?” Komali asks after quickly scanning over the contents of the letter.

“Yeah, I think so,” Aryll says gravely. “I want to go find him, but I didn’t know who else to contact, so you were the first one I wrote to. I haven’t told my grandma yet, but…”

Komali thinks for a moment before replying, “I understand. Your brother helped me many years ago, so I’ll help you. Do you have a boat?”

“Umm…” Aryll bites her lip sheepishly and sways side to side. “Not exactly?”

Komali rubs his chin thoughtfully before replying, “I can arrange for a boat to come here from Windfall Island? It may take a couple of days, though.”

“The sooner we can start searching, the better,” Aryll counters. She snaps her fingers after a moment and smiles. “Actually, there are a couple of islands east of here where a sailor named Loot lives. He knew my brother, and it’s a lot closer than Windfall Island and–”

“–I can fly there and ask for his assistance!” Komali finishes for her.

“Yes!” Aryll says excitedly. She pauses to catch herself and adds, “But only if you don’t mind. I know you’re royalty and all.”

Komali bows, “Of course, I don’t mind. I’ll request his assistance, and we’ll return together by boat.”

Aryll takes a deep breath and exhales, “Thank you. But before we can leave, I need to tell my grandma.”

Komali nods and extends his arms to reveal his wings, and with a couple of flaps, he takes flight and heads east, Skett and Akoot flying alongside him. She watches until they’re out of sight before making her way back home, holding the letter to her chest. Grandma will be so worried, but I have to do this, she thinks. Brother did the same for me. I have to find him and bring him back home.

Michaela El-Ters is an Associate Editor for Zelda Dungeon. Her first foray into fan fiction, this story was inspired by her love for The Wind Waker and the surprising amount of tragedy that permeates the game’s narrative and characters. When she isn’t writing or blogging, Michaela loves to watch movies and anime, read books, and cuddle her doggo. To read more of her content, check out her blog here.

Comments
Sorted Under: Fan Fiction Friday, Games, Original Content, Slider, The Wind Waker
Tagged With: No tags were found for this entry.