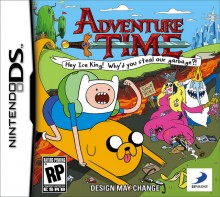 A few months back I had a weekly feature on various Zelda clones. Well, I’ve been away for far too long. Let’s talk about clones some more! The recent release of Adventure Time: Explore the Dungeon Because I Don’t Know got me thinking about the previous Adventure Time game, and how even though it was heavily inspired by the black sheep of the Zelda family, The Adventure of Link, it was actually quite good.

Released exclusively on the 3DS (and the DS), Adventure Time: Hey Ice King! Why’d you Steal Our Garbage? takes much of its design from Zelda II. Now why exactly the developers decided to base their first Adventure Time game on what most people consider to be the worst Zelda game remains a mystery. I, however, am not one of those people who hates The Adventure of Link. I love it despite its absurdly challenging ways and its sometimes questionable game design (after dying you have to start all the way back at North Palace? Come on!). There were very few games that ever tried to recapture the side-scrolling Action-RPG genre in its day – only Battle for Olympus and Wanderers from Ys come to mind. So for a developer to take such a risk as to base their first game for a wildly popular cartoon show on such a disliked game… seemed like a terrible idea. However, not only did they take inspiration from The Adventure of Link, they actually improved upon it!

But first, some details as to how exactly this game is inspired by the second Zelda game. Just like in Zelda II, exploring the overworld is experienced in a top-down view with towns, dungeons, and battles being experienced in side-scrolling action. Icons representing enemy types will appear on the overworld and if you accidentally touch one you are “warped” into a small, repetitive battle screen where your goal is to kill the enemies.

Attacking is done mostly via sword combat with the ability to attack regularly and then a ducking attack as well – just like in The Adventure of Link. And then to seal the deal, your character eventually learns a downward thrust and then an up thrust! And a bit later they throw in the spin attack just for the heck of it. Besides all of the Zelda II rip-off attacks, this game adds quite a few extra ones, along with some fun non-combat moves, all of which are provided by Finn’s trusty sidekick, Jake the Dog, who can transform into various useful shapes. This essentially replaces the need to collect various items; instead Jake just learns how to transform into them. It basically amounts to the same thing, though. And then there’s the fact that life is represented by hearts… which is actually not in keeping with The Adventure of Link, being the only Zelda game to use a more traditional heart-less gauge.

This game is, for all intents and purposes, a sequel to Zelda II – just with Adventure Time varnish. And that “varnish” is where this game really shines. The unique Adventure Time humor is infused to nearly every single line. Simply wandering around the landscape and encountering all of the strange Ooo characters would be enough to have satisfied me, but the fact that they’re all written with the same top-notch quality from the show makes it perfect. Even the items are creatively weird: instead of hearts to replenish your life, you eat things like Shoofly Pie and Birthday Cake, or drink a carton of Bug Milk. There are various other equally strange items to use for attacking as well, including the fun Habanero pepper which lets you shoot fireballs right from your mouth!

If you happen to be an Adventure Time fan and haven’t yet played this game, you need to change that fast. Or even if you’ve never seen Adventure Time but would like to play a game which has similar (but improved) controls to The Adventure of Link, then this game is for you, too. It’s algebraic!

Once upon a time Bastian was the editor-in-chief for Zelda Dungeon, now Bastian spends most of his time on Zelda Dungeon’s YouTube channel reporting breaking Zelda news, or reporting Nintendo news nearly daily on BastianTime, his own YouTube channel. Also, he loves cheese, but cheese has been bad to him, so he is currently avoiding cheese at all costs. Please under no circumstances approach Bastian with cheese.