Another Look at the Notorious Legend of Zelda Cartoon 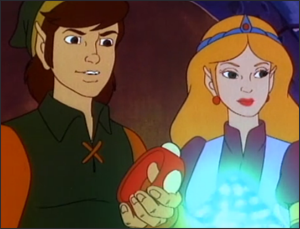 The Legend of Zelda cartoons from The Super Mario Bros. Super Show: every Zelda fan has probably heard of it, few have watched it, and even fewer love it. The show aired in 1989 once a week for a mere thirteen episodes. The basic premise was simple enough; Zelda has the Triforce of Wisdom, while Ganon has the Triforce of Power. Whoever captures both Triforce pieces is the ruler of Hyrule. This leads to Ganon sending minions to steal the Triforce for himself while Link protects both Zelda and the Triforce, often leading to comedic and slapstick situations. Meanwhile Link only wants a kiss from Zelda, an event which is consistently impeded by plot in some way. These circumstances always lead him to say his catchphrase “Excuuuuusssse Me, Princess!” With a healthy dose of sound effects pulled from the games, corny plots, recognizable monsters, and some fist waving from a Ganon who says “I’ll get you next time!” Obviously not the greatest of animation quality was placed in this show; it was a fifteen-minute short only to be seen on Fridays after all. But it was fun for what it was, one of Nintendo’s early attempts at commercialization.

Modern fans normally despise the series, claiming that the characterization is completely wrong or that it has so little to do with the storyline of the game that it cannot be anything more than poor fanfiction. All too often it is insulted and dismissed by fans of the franchise. However, many may not understand the circumstances behind the show’s creation. All the show’s creators had to go by was what was pulled from the original Legend of Zelda. Since the animation process can take a very long time between storyboarding and completion, most if not all the scripts were already written and probably animated before Adventure of Link was released in late 1988. So any extra story that it could have added from the developers at Nintendo was not there to be used by the people at DiC. Hyrule and everything within it was essentially a blank slate at the time. The elaborate mythology of Hyrule did not exist yet, nor did we even know what a Hylian was. We hadn’t heard of Ganondorf and even the Triforce of Courage was unknown at the time.

This is absolutely everything we had when it came to a story for Zelda, and any information about Hyrule in 1988.

Many complaints about the show concern the characters’ portrayal in the series. Most people who have played several of the games and have come to love the characters of Link and Zelda have trouble with the strange characterization of the cartoon Link and Zelda. They do not understand just why Link had to be portrayed as an egotistical jerk, or why Zelda never once wore a dress or acted slightly “princess-like” at all. Again, since the animators had a blank slate to work with, it was up to them to create a strong personality for each character. This is an essential part of the storytelling process; they cannot rely on the character’s look or actions alone to leave their mark and be memorable. Fictional characters are given “life” through a strong, consistent personality which will dictate how they talk or react to the world around them. The game did give the creators something small to build upon in the characters of Link and Zelda. In their imaginations, someone like Link who would boldly go off and fight the hordes of some magical dark lord singlehandedly had to be either a little crazy or absolutely sure of himself to an incredible degree. Zelda rules a magical land that is constantly overrun by moblins, dragons, and monsters, that rests on top of a demonic underworld controlled by an evil ruler bent on conquering Hyrule. Zelda did not have the luxury of being weak-willed or spoiled. Given the short run time of each episode, the personalities had to be exaggerated a little bit since there was not enough time to develop a plot to its fullest. The personalities had to be explosive and instantly obvious to the viewer. 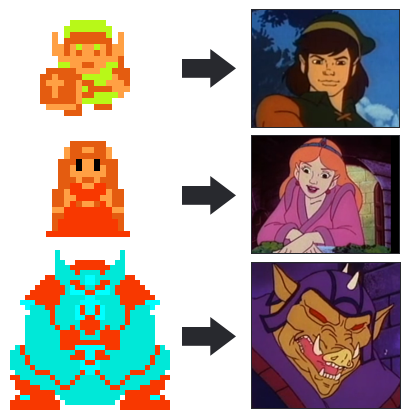 Ganon as a bumbling, fist-waving villain who constantly berates him minions for their repeated failures is also reviled by longtime fans of the games. Ganon always fails in his endeavors to steal the Triforce of Wisdom from the heroes even with the vast amount of magical powers he gains from his own Triforce piece, excaping to his lair to plot another day. Complaints were often made that he was not a credible threat, his design is very loosely based on the game character, and his dialogue was terrible were. Once again, the animation team working on the show again had almost nothing to build upon. The game manual did not tell us anything beyond the fact that he attacked Hyrule and stole the Triforce. Nothing was known on his nature or origin. He was some kind of leader of monstrous minions that plagued a magical land.

However, the Ganon of the cartoon was not at all different from almost every other major cartoon villain that appeared in the 80’s. When compared to other villain characters, Ganon does not stand out in any significant way, nor does he appear to be any weaker or worse of a threat than any of the more popular villains of the era. He is just another in a long line of 80’s villains. After the success of He-Man, GI-Joe, and Thundercats, clearly any animation studio would not want to move away from what works. It is very likely that the animation studio saw many parallels between Ganon and other great and powerful magical evildoers of past shows and decided to maintain that archetype. They saw that people liked Skeletor and Mum-Ra, so they might like Ganon as well. Any extra characterization beyond bad guy motivated by being bad, who liked doing bad things, did not appear until the releaseOcarina of Time. Until then the Ganon of the games was just an evil pig man motivated by greed. He was a very typical last boss character, the type seen in nearly every game at the time.

The constant use of sword beams is criticized as well. Link is almost never shown using the sword as a sword in any episode. However, in the mid to late 80’s censors were cracking down on violence in cartoons. Fears of children imitating what they saw on television meant that characters could not punch or swing objects at each other. Fans of the Superfriends might remember the infamous “Bear Hug” attack where a stronger villain would grab a hero and simply hug them to death. Very rarely was a punch or kick ever thrown in a show that consisted of a dozen superheroes and villains. The era included less harmful lasers as opposed to guns for GI-Joe andcharacters picking each other up or trapping them in carefully placed chandeliers or cages. The magical sword beam fired from Link’s blade was the perfect answer to the need for less physical combat. It could imitate the lasers seen so often in many other shows and still be relevant since the sword in the game did just that. It could recreate the combat seen in the game with monsters disappearing after so many shots.

There were a great many benefits brought on by the animated series that are overlooked by current fans. First of all, the show did introduce the Zelda series to fans outside of just game players. If not for the show widening the audience to more people, Zelda might not be one of Nintendo’s main franchises today. The show introduced the very first elements of story other than Ganon stealing the Triforce and Link rescue the princess. It was the first time we saw a personality for Link and Zelda, even if these personalities are not favorable to many people viewing the show today. The show also helped establish the comic series by Valiant Comics which further elaborated on the story while including elements of the sequel, Adventure of Link. The comic series’ inclusion of the second game, and all the towns, characters, and story it introduced, allowed for more stories to have a closer association to the games. At the time there was more official game story for writers to build upon instead of inventing their own characters and situations from scratch. 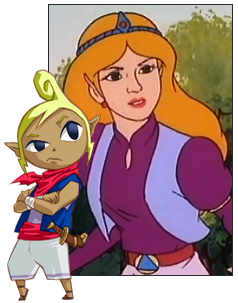 The show also created a few concepts that are still alive in the games today. Sprite was Link’s first fairy companion almost ten years before Navi appeared. Ten years before fans would be introduced to the well-known Epona, Link’s trusty steed was named Catherine. The Evil Jar invented the concept that Ganon’s minions were creations of magic and explained why they would disappear in a poof of colored smoke, leave items behind, and reappear when summoned. This was not unlike the Ganondorf’s minions in The Wind Waker who will explode into purple and black smoke when defeated, leaving behind rupees and items. Link’s magical pouch that could shrink items for easy storage still remains as the only explanation given on how he could carry all those weapons around with him on his adventures. A strong willed Zelda that uses a bow to fight off enemies was seen again in The Wind Waker.

Overall the show was absolutely a product of its time, very similar to other 80’s cartoons where the heroes would always triumph over the convoluted plans of the comical, non-threatening villains, often leaving the villain to shake their fist in the air and threaten that next time victory will be theirs. Each episode typically had a moral to be learned, and there was normally very little if any physical violence even when the hero did brandish a sword regularly. Its single greatest failing might simply be that it did not last long enough to create the beloved nostalgia that keeps other shows of the past so well remembered and loved.