1UP: Majora’s Mask a Dark Story Filled With Troubles and Depression 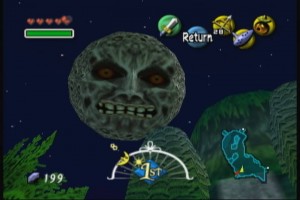 When asked about which Zelda title has the darkest storyline, most fans of the series would consider Twilight Princess as the culprit in displaying themes of immense sorrow and grueling hardship in the land of Hyrule. Its graphical design and the twilight world involved in the title are mainly responsible for the impression it marks on players as it reveals the difficulties faced by commoners which Link needs to help in order to allow for a greater future. Although, looking at a Zelda title in this way is not only strictly limited to Twilight Princess.

Nintendo site 1UP has written an article stating why Majora’s Mask’s clockwork apocalypse revolves around a Termina suffering from a dark and depressing nature twisting and turning with some absolutely horrendous events which produce absolute sadness and misery for citizens in the region. In this way, 1UP considers Majora’s Mask to be even darker than Twilight Princess.

Care to take a glance at what 1UP has to say about the dark themes of Majora’s Mask? If so, click the jump to read more!

1UP starts the article by making a point that although Zelda fans were shocked when the ESRB slapped Twilight Princess with the mature T rating for its adult nature, Majora’s Mask was on par or even greater in its display of real-life events. 1UP believes Majora’s Mask’s storyline is the darkest and most emotionally written by the family-friendly Nintendo team.

Also discussed is how although every Zelda game happens to feature problems, Majora’s Mask’s storyline is plagued with issues all the way through the plot in which you partake. Instances such as the Redead and Gibdo-infested farm in which a daughter needs to take care of her father who’s turned into a half-Gibdo, a Goron forced to sleep outside due to Link taking up the vacancy in the inn, and plenty of other difficulties turn this title into a depressing experience. 1UP also makes the point that even though you happen to save these people by performing successfully on certain quests, the items you are given do not hide away from the fact that once you play the “Song of Time” on your ocarina and warp backward to day one all those troubles occur once again.

If you would like to read 1UP’s full article about Majora’s Mask and the clockwork apocalypse then click here!

Do you believe Majora’s Mask is the darkest Zelda title? Do you feel emotional experiencing all the sadness and depression in the game? Do you agree with 1UP’s article?