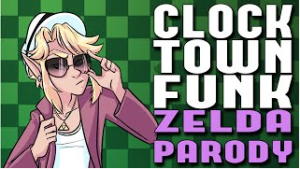 Josh M., also known as Youtuber ReallyFreakinClever, has made his fame with in-depth analysis of some of our most beloved video games with his Really Freakin’ Clever series and poked fun at our favorite titles with his 64 Things Wrong series that started as an April Fool’s joke. Josh himself is a musical theater student, so it comes as no surprise that he has released an upbeat parody of the hugely popular Uptown Funk by Mark Ronson featuring Bruno Mars set within Termina and featuring our favorite Hero of Time. Hit the jump to listen to this funky beat.