There are a a couple ways to get to this hidden shrine, but perhaps the easiest is to warp over to one of the Gerudo Highlands shrines and make your way eastward. The shrine quest is located just northeast of the pathway that leads to the Gerudo Desert, right where the the path shifts from running north-south to east-west. You can glide down from above as the area is clearly distinguishable by the circular pots and the many torches that appear as you draw closer. 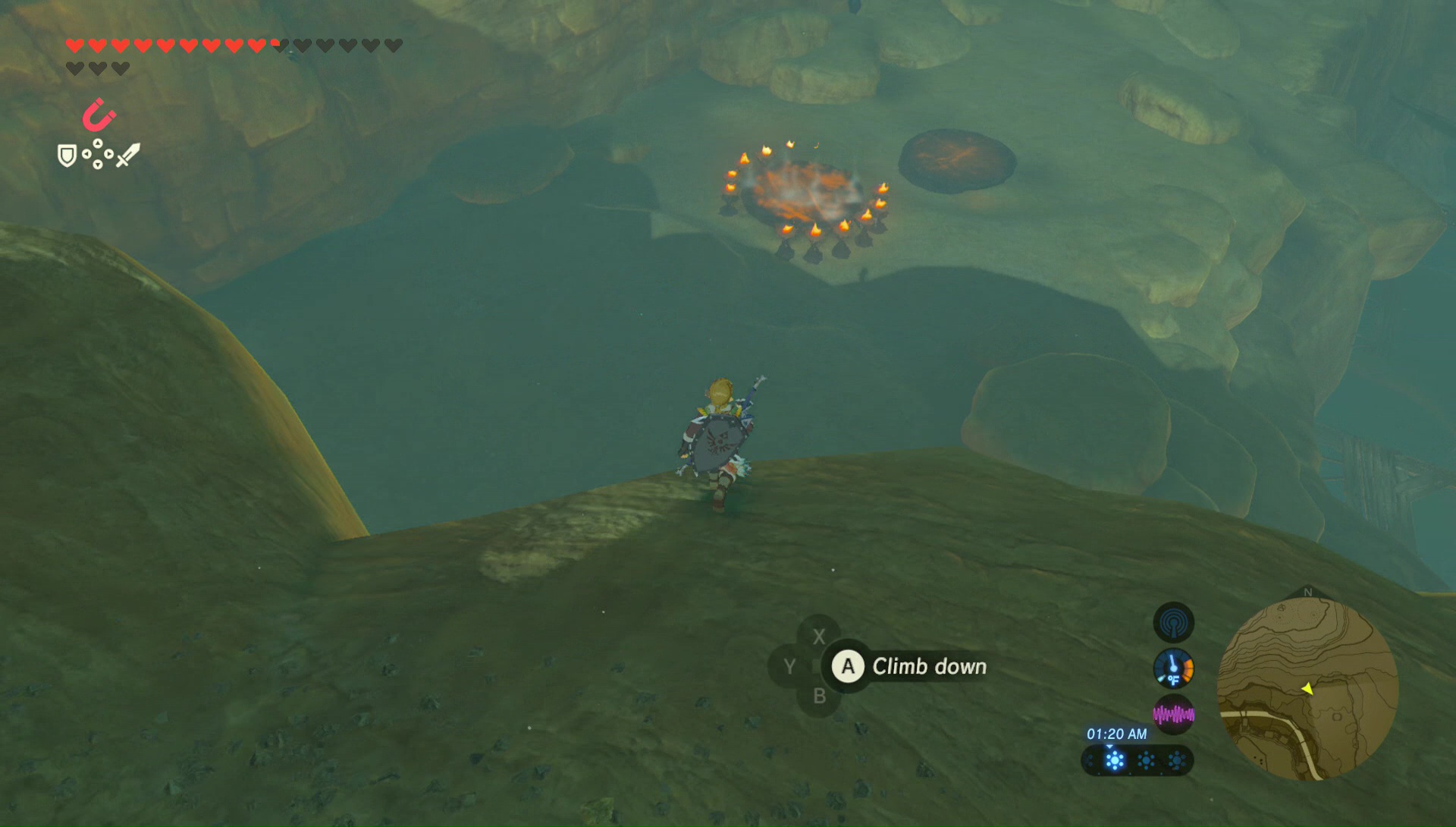 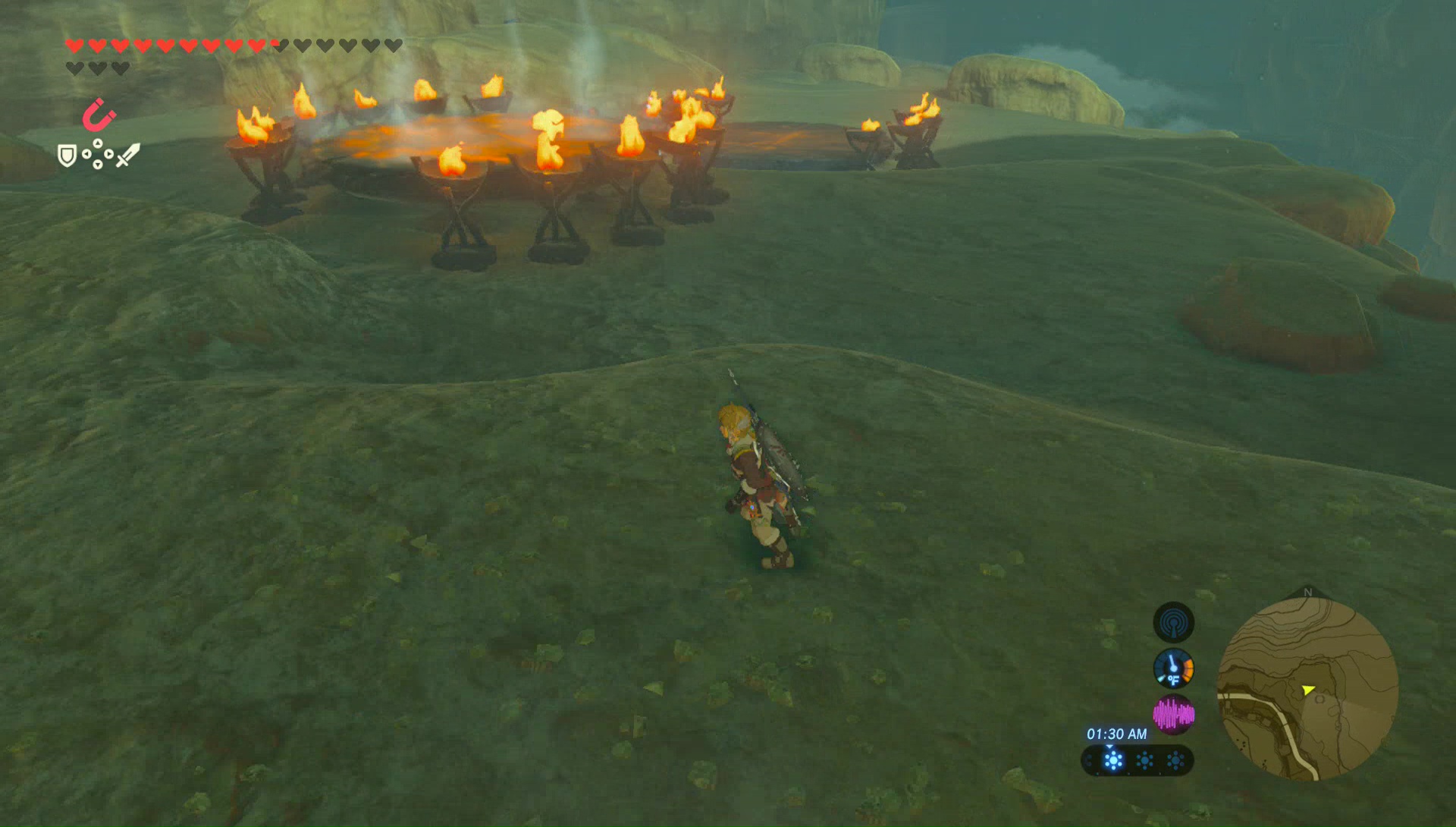 Speak to the Gorons in front and this will trigger the Test of Will Shrine Quest. Just put on your heat resistant gear and stand on the hot platform. You might take a couple hearts of damage, but you should be able to last well behind the three Gorons, who will all collapse from the heat. 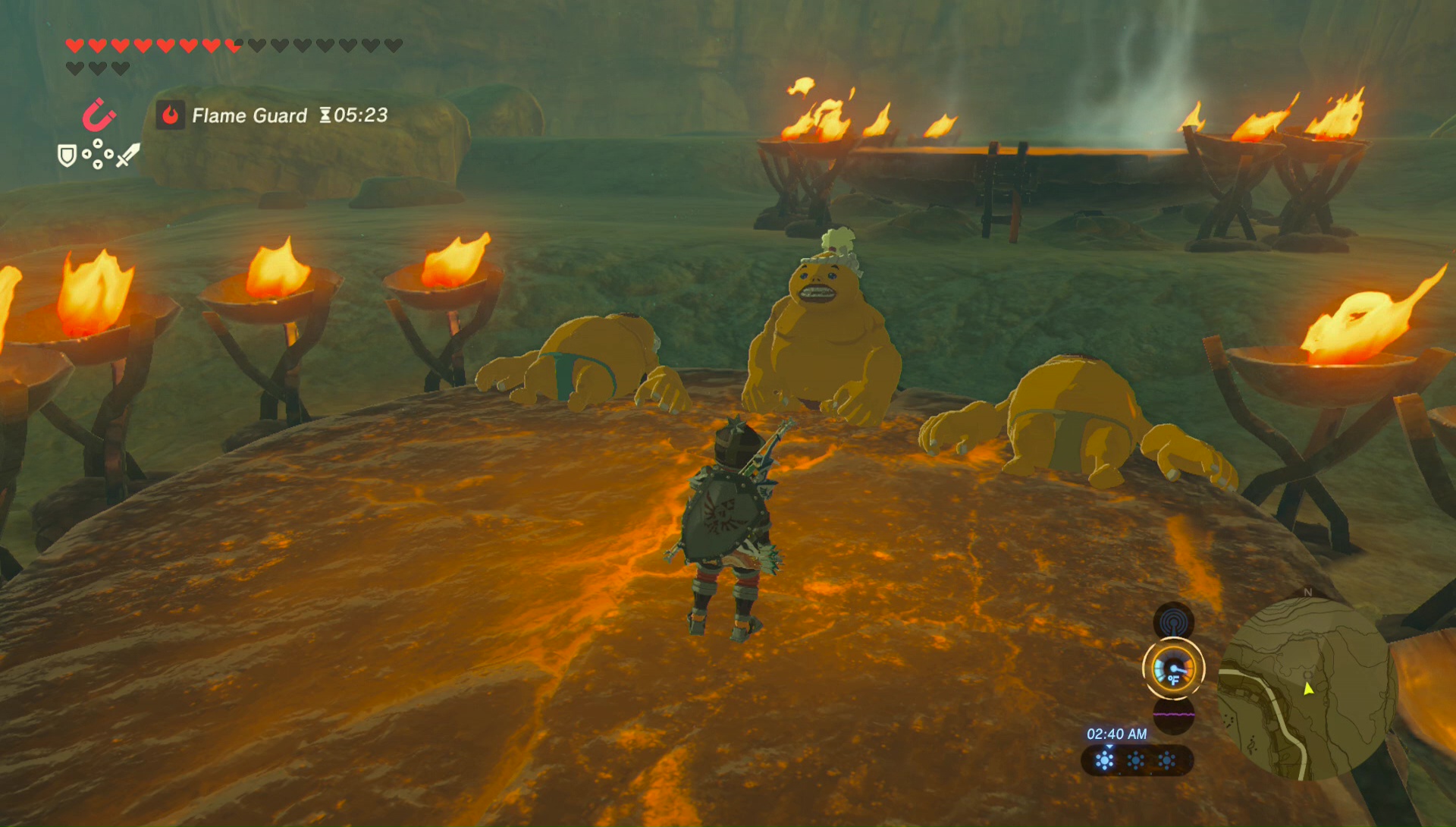 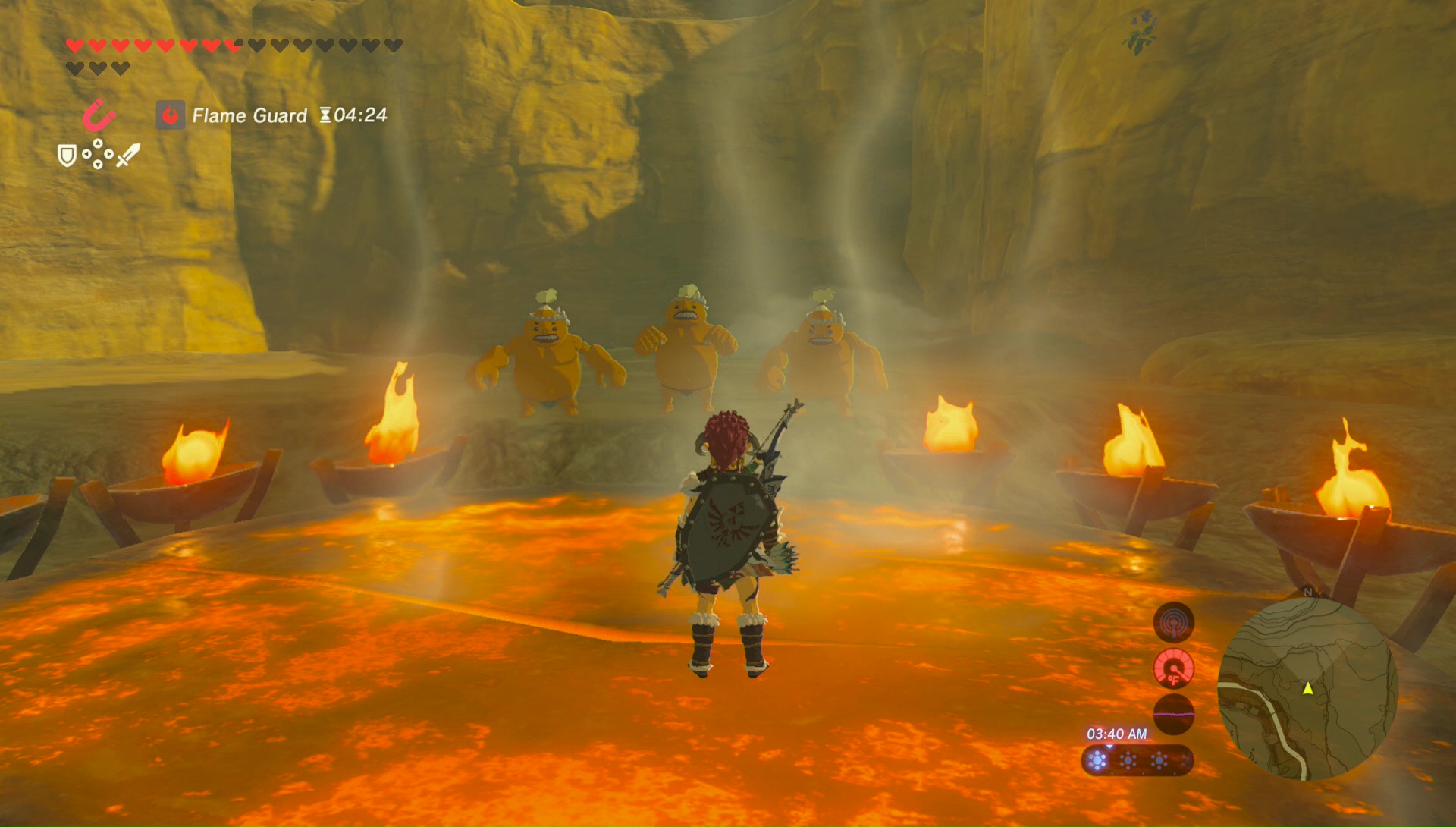 This will then lead to the ultimate endurance competition. However, in order to compete in this one, you must remove your heat resistant gear. In order to survive this one, you’ll need to drink a potion or elixir that will give you Flame Guard. Go ahead and do so and then step onto the hot pot to trigger the start of the endurance quest. This one takes a bit longer, but all you have to do is stand there.

After successfully just standing on the pot, the shrine will appear.

In the first room of the shrine, activate the gyro control puzzle. You can rotate the box ahead and what you need to do is rotate it so that all six sides are powered up. There really isn’t anything to it, so just twist the platform until they are all powered up. 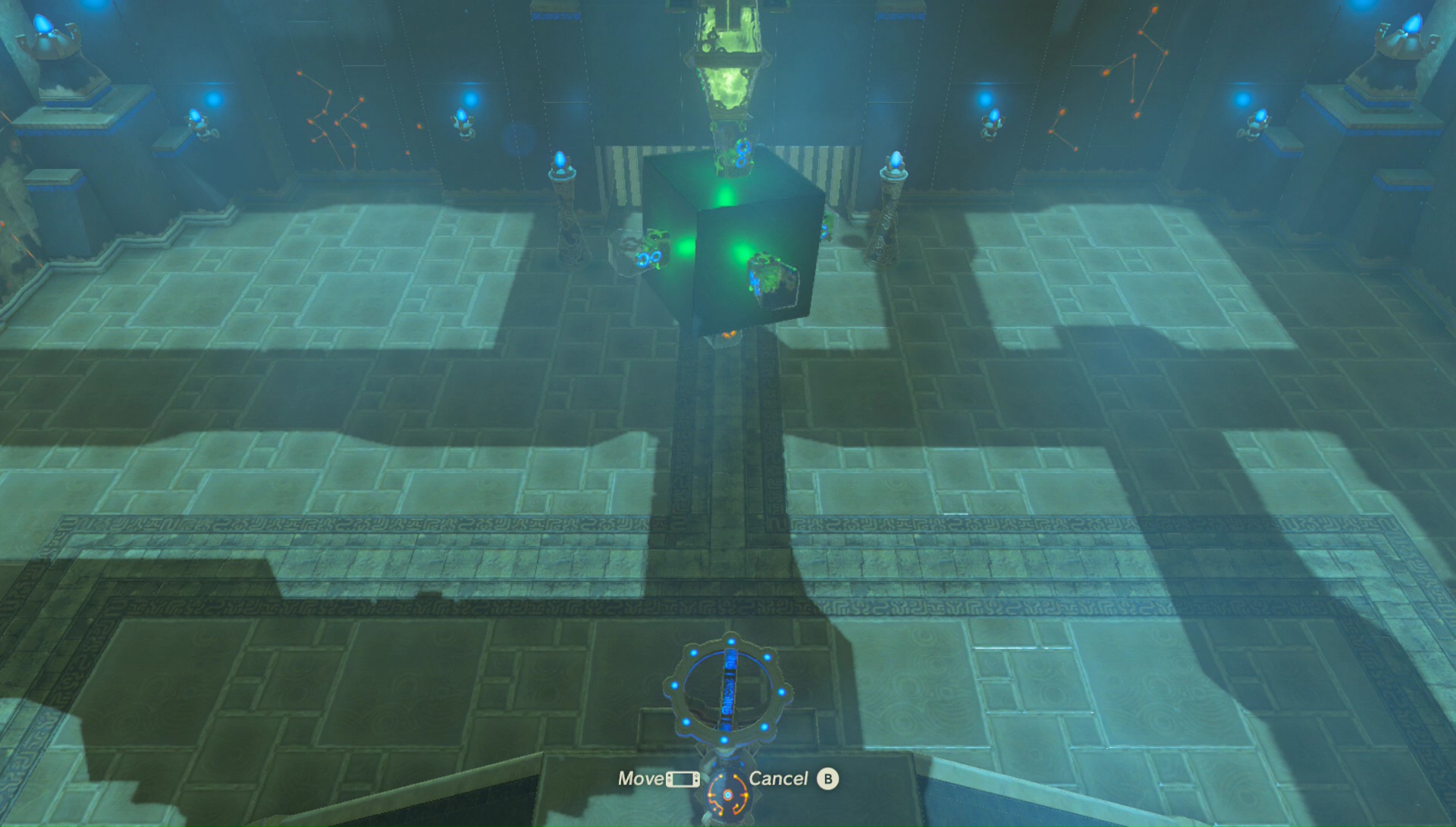 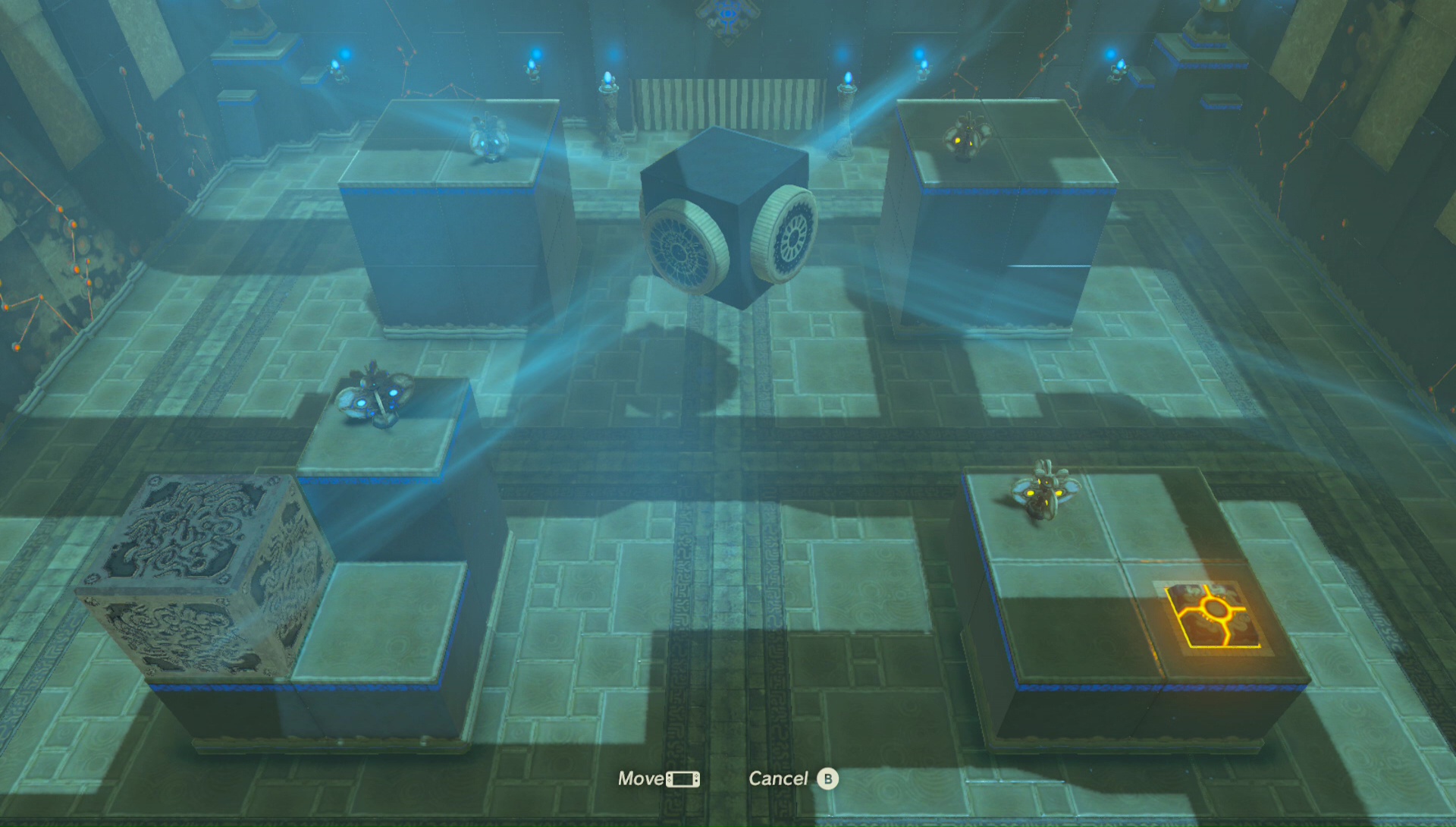 Run ahead to the next gyro control and this one has wind coming out of it. There are three higher up windmills on the sides and then one lowered on the right. Don’t worry about the lowered one for now. Our attention is getting a treasure chest that is on the left side of the room. You want to position the wind so that the three windmills are all turning. Then turn just a tad bit more, so that the wind that is blowing towards the bottom-left is aimed more in the direction of the treasure chest. Release the gyro puzzle and then run and jump with the paraglider. The wind will glide you to the treasure chest where you can collect a Golden Claymore. 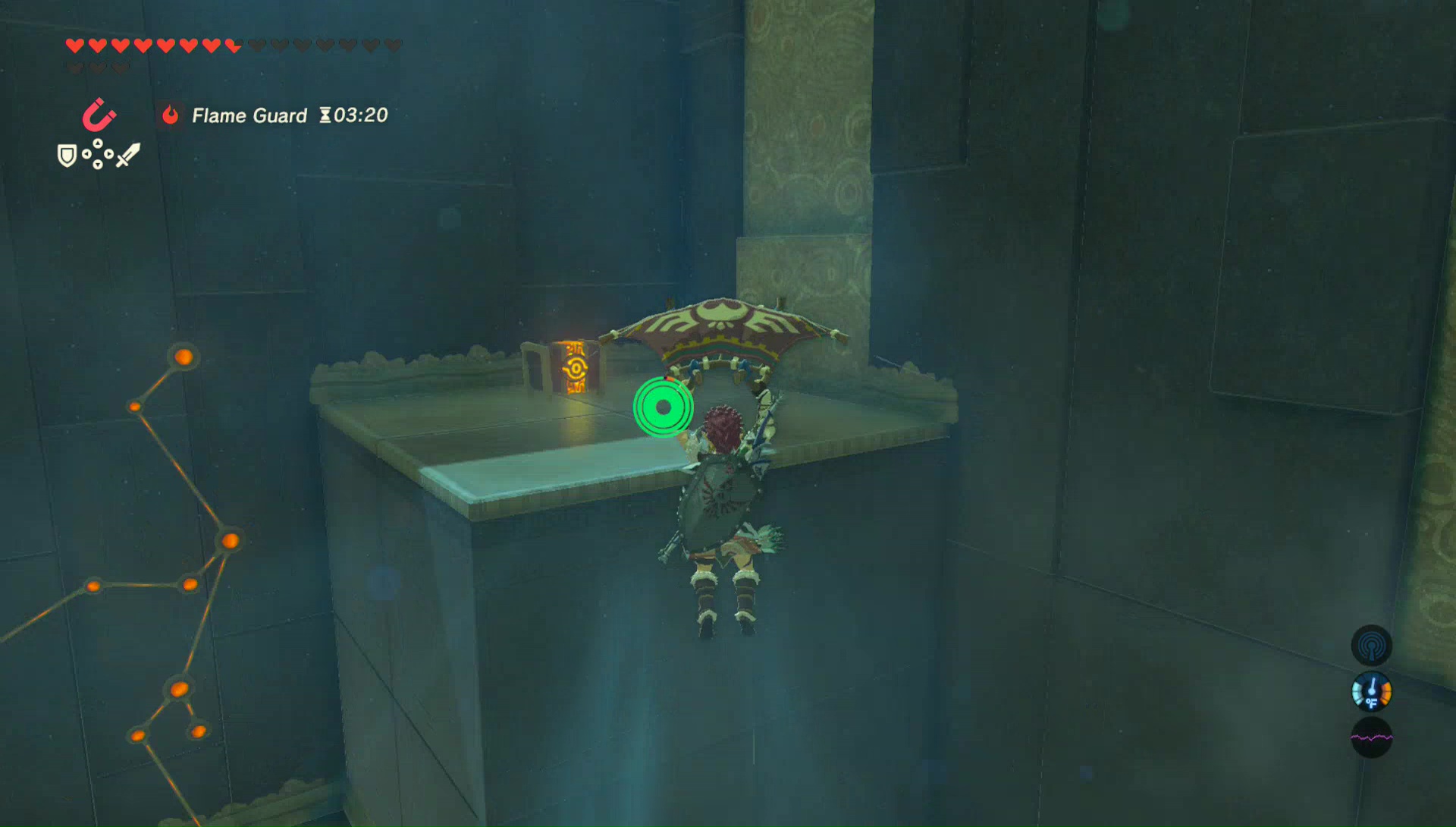 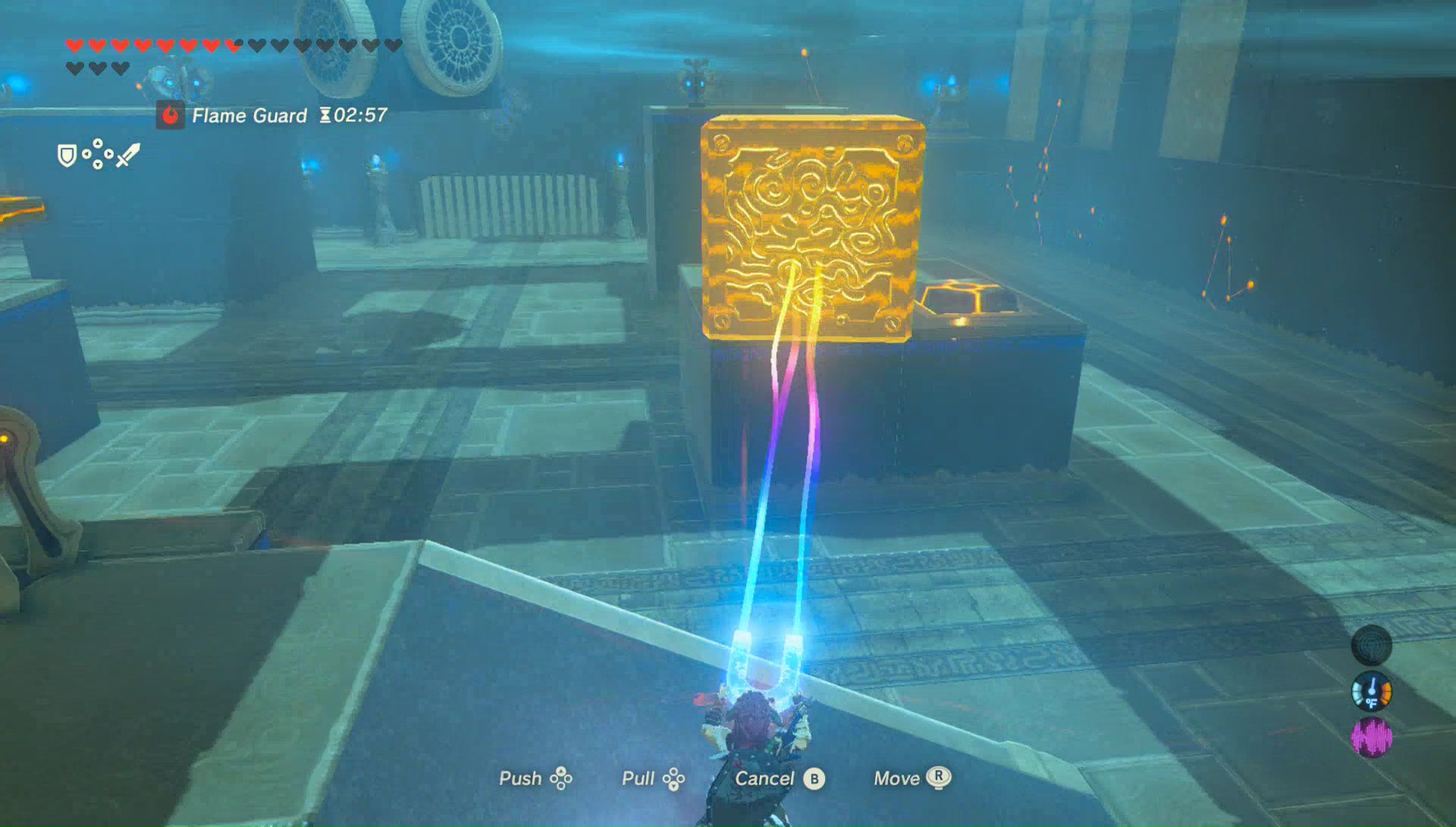 Return to the gyro control and you’ll see a metal block on the left side of the room. Grab it with Magnesis and pull it up. It will cause that platform to ride, but that’s okay. We want to move this metal block to the floor switch that is on the right side. Do so and drop it, causing that platform to rise. Now if needed, adjust the wind so that three of the windmills are blowing. Now jump over to the floor switch that is on the left. You can step on it and it will raise the platform. With all four windmills blowing, the door ahead will open. 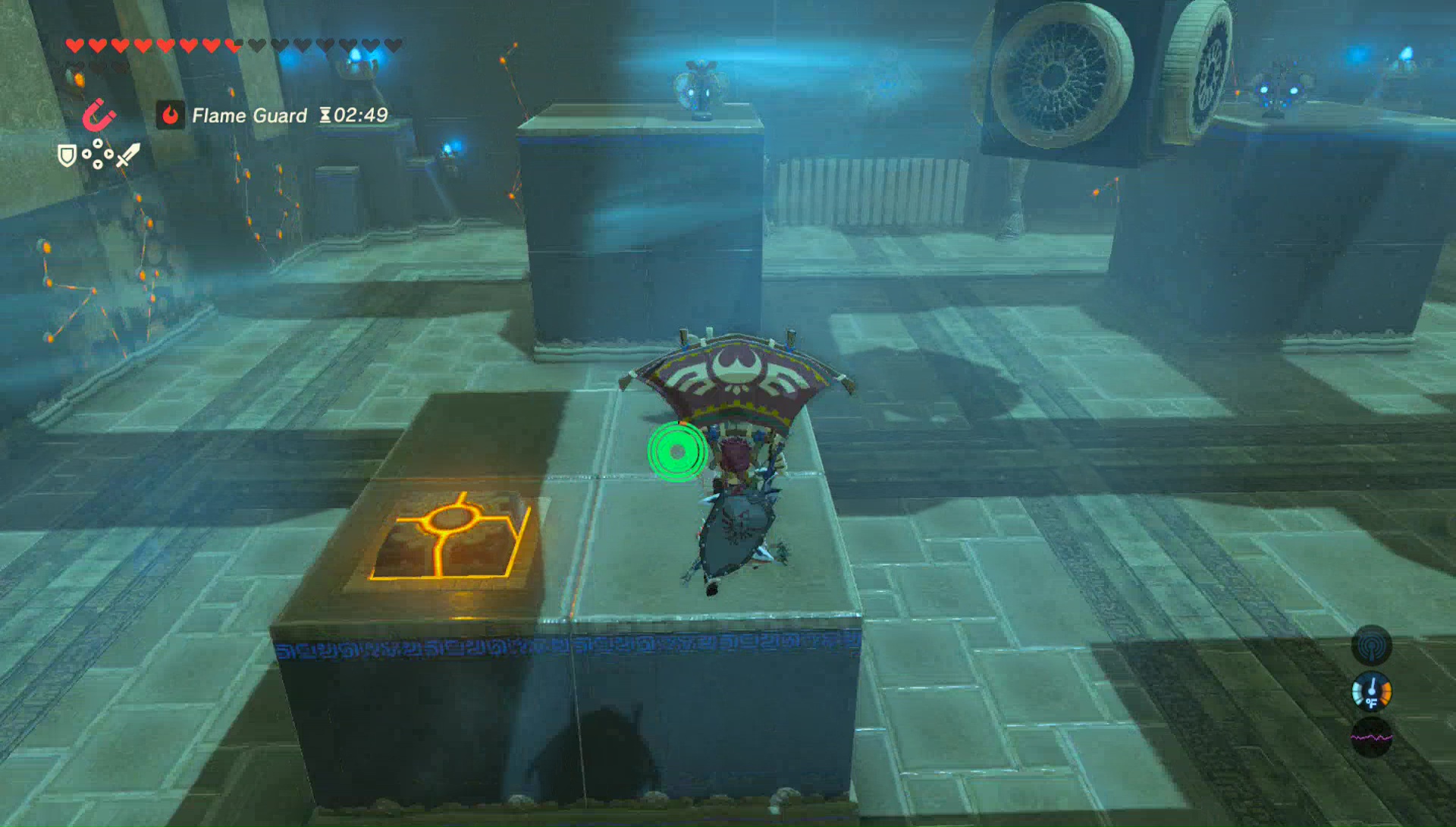 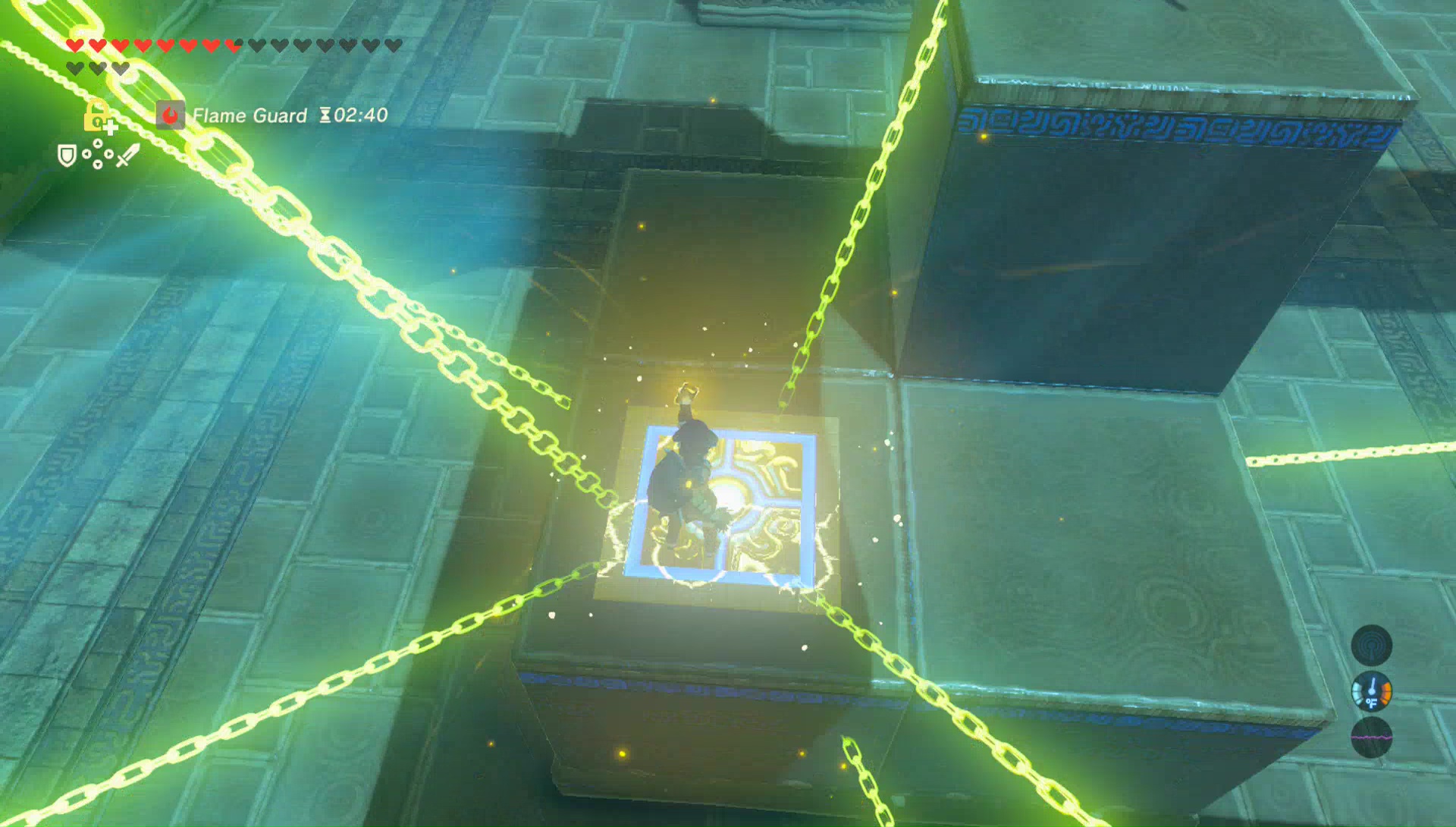 However, once you step off the platform, it will lower and the gate will also close. While standing on it, use Stasis on the floor platform. While it is lowered, quickly run passed the gate.

In the next room we have one more gyro puzzle and the solution requires you to light the six torches all on fire. However, there is water shooting out from the two fountains, complicating the process. Look up above moving block and you’ll find a treasure chest higher up. Shoot a fire arrow, causing the vines to burn and the treasure chest to get tumbling down. Open it up to get a Gerudo Spear. Now use Magnesis to grab this treasure chest and place it on the floor switch on the left. This will lower the nearby pillar, getting the left fountain out of the way. 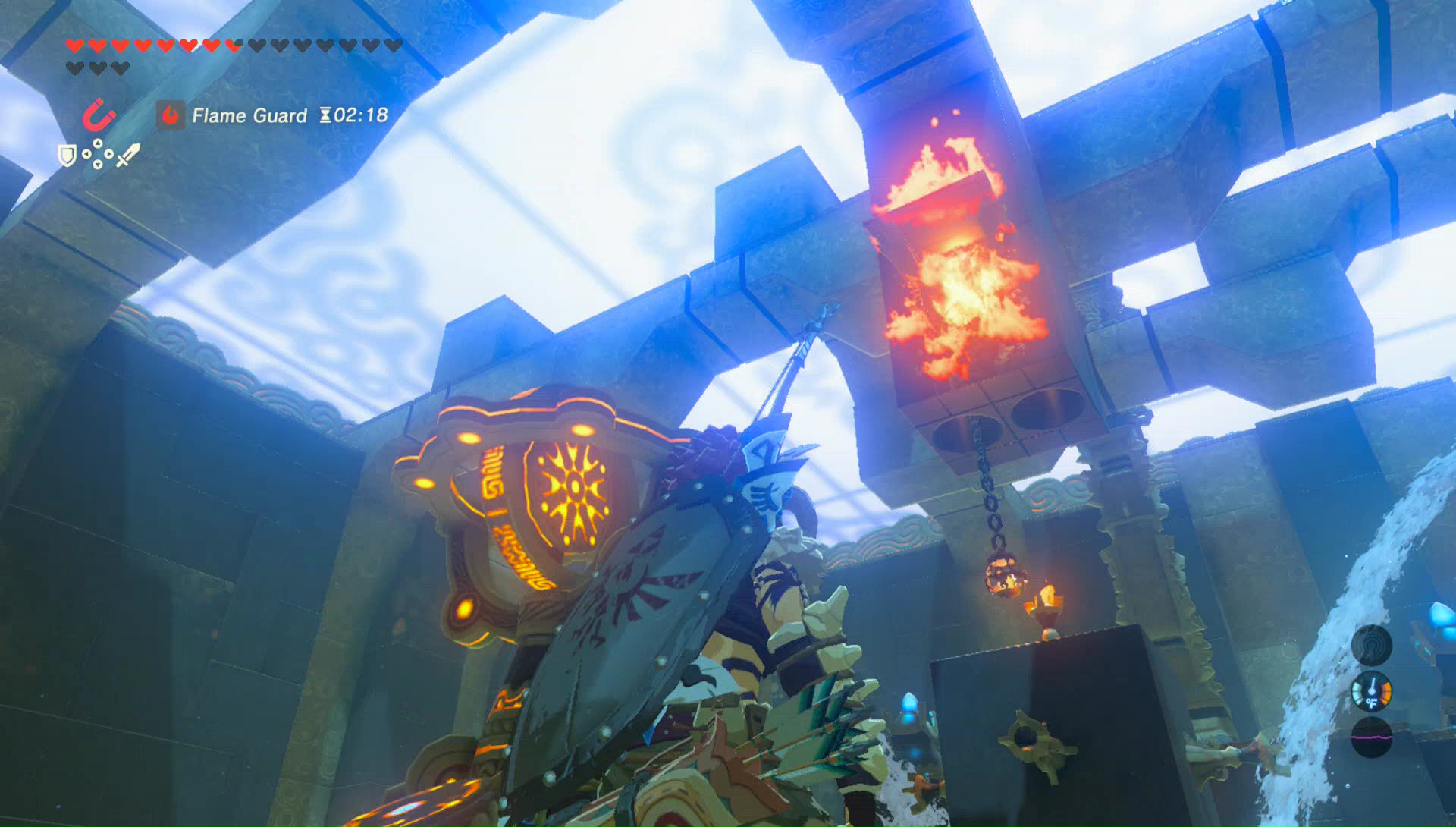 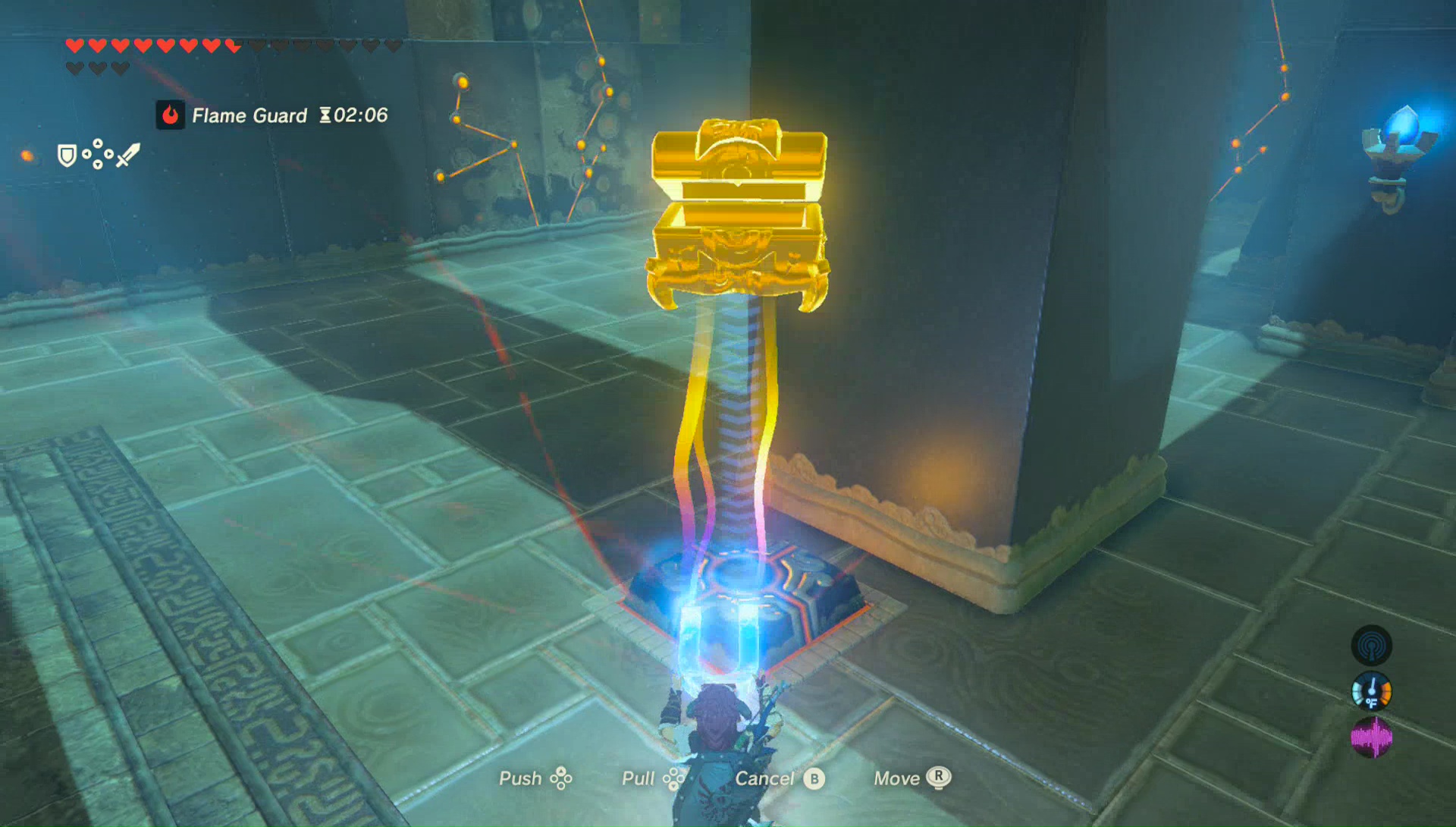 Return to the gyro control and turn the block so at least four of the torches are lit, with just the ones on the sides left to go. Now release the controls and use your Stasis to freeze the fountain on the right. Quickly turn back to the gyro controls and turn the block to light up the remaining torches. This will open up the nearby gate. Run over and speak with the monk, Joloo Nah. He will reward you with a Spirit Orb. 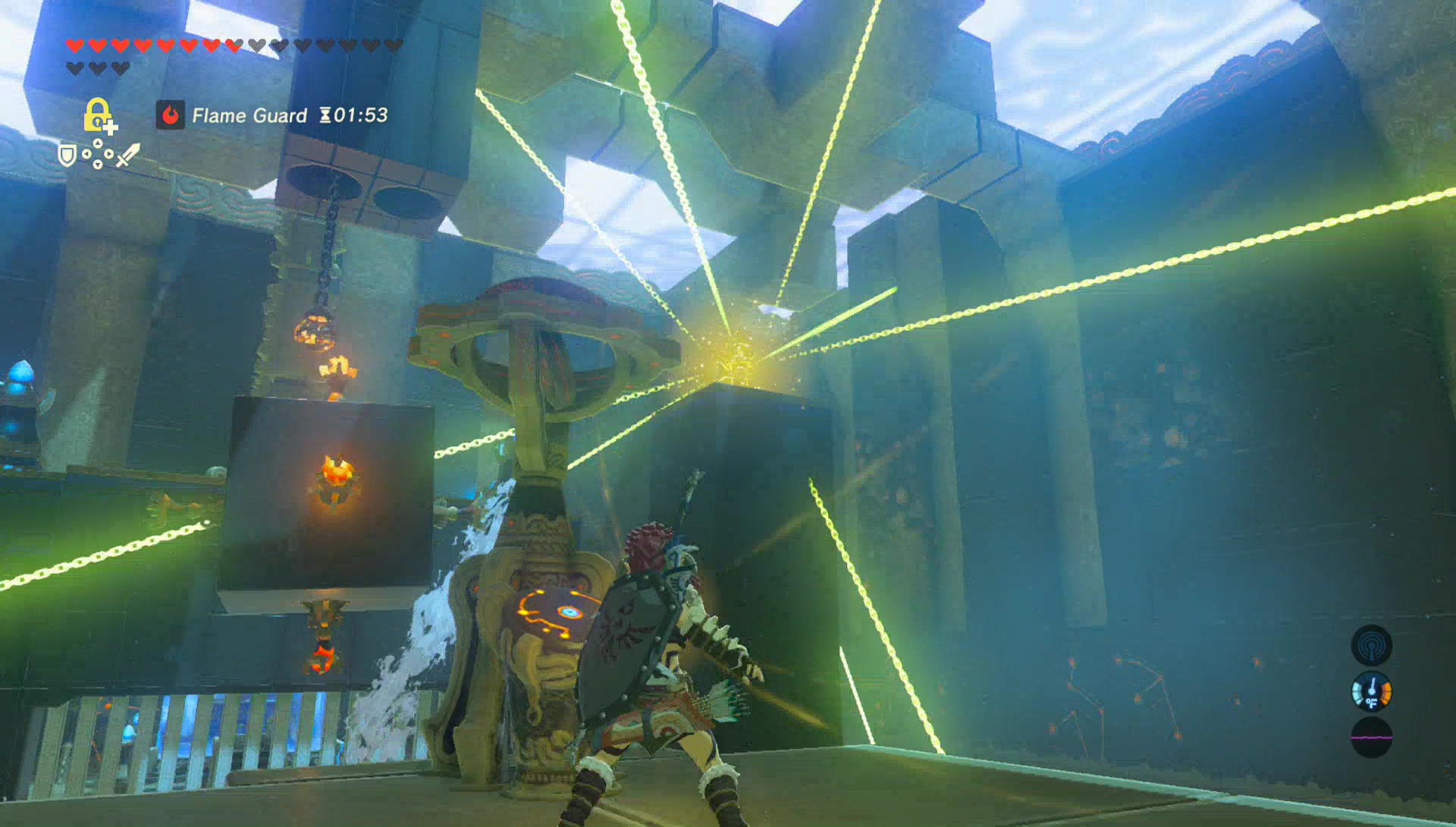 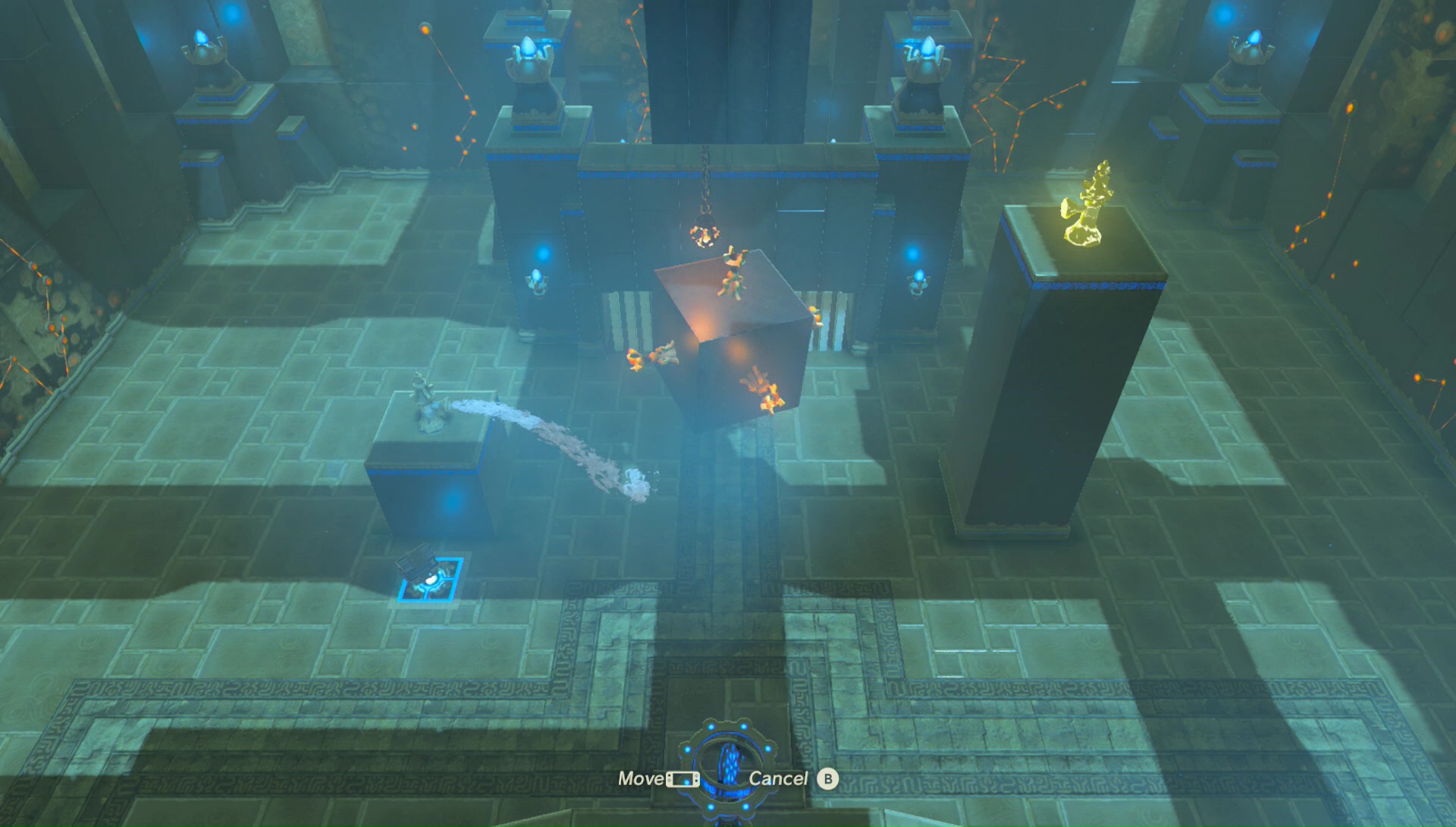