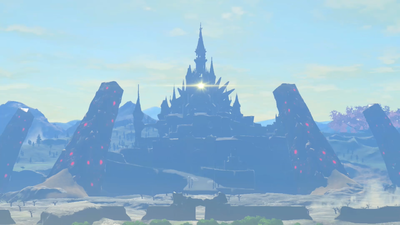 Once Link is past the front gates, the Sheikah Slate produces a 3D map of the castle detailing its outer pathways, and once the interior is reached, the map switches to show the inner halls. The castle is the only place in Hyrule where Link cannot directly teleport from, as the map menu prompts Link to abandon the location by pressing (x), which transports Link south of the front gates. If you are in Hyrule Castle to defeat Ganon, an astonishingly large portion of the dungeon can be bypassed by using Revali's Gale if you have it. If not, you will have to take the long and hard way.