The West Hyrule Plains is a location found in Breath of the Wild. 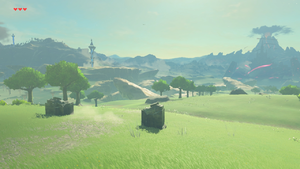 The West Hyrule Plains are a large land area located south of the Ridgeland Tower. The plains span fromt he area just south of the Breach of Demise and southwest of the Carok Bridge, all the way west to the area northwest of the Jeddo Bridge, including the area surrounding the Sheem Dagoze Shrine.

At the northeast portion of the plains there is a large tree surrounded by some shallow water. There is some decking surrounding the tree and there is a treasure chest up top that contains five Bomb Arrows. There is also a Rusty Halberd, Rusty Broadsword, and a Rusty Claymore in this area. Just southeast of these, there is an unnamed bridge that crosses over the Regencia River. This area is littered with Red Bokoblin and Blue Moblin, although they are more dangerous than they appear as they wield Bomb Arrows.

There is a large Blue Hinox, found sleeping on the plains, just northeast of the Jeddo Bridge. The Hinox carries several weapons around its neck, including a Soldier's Broadsword, Knight's Halberd, and a Soldier's Bow.

At the west side of the plains, there are some ruins where Link will encounter some dangerous Blue Bokoblin, Black Bokoblin, Blue Moblin, and Black Moblin. There is a treasure chest within the ruins that contains a Topaz gem.

Link will find Kass playing is accordion just north of the Jeddo Bridge. Talking him will begin The Two Rings shrine quest where Link will need to shoot a single arrow through two rings in the area to reveal the shrine. Link can align himself so the ring at the northwest part of the area and the one in the direction of the Jeddo Bridge are in a straight line. Doing so causes the Sheem Dagoze Shrine to appear, completing the quest.

All trees should have one apple hanging in the same spot.

Stand on the patch of grass near the pinwheel, and shoot the three balloons.

Stand on the grass, shoot the balloons.

Run through the flower patches 1-5.

Run through the flower patches 1 though 5 in ascending order.