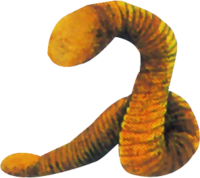 A Moldorm is an enemy that appears in multiple The Legend of Zelda games to date. It is usually a small land-dwelling creature that is like a long worm. In more recent games, it has taken the appearance of a more centipede-like enemy instead of worm-like. In A Link to the Past, Link's Awakening, A Link Between Worlds, and Tri Force Heroes, Moldorms appear as Bosses.

In The Legend of Zelda, Moldorms appear in Level 2 and in Level 7 in the First Quest, or Level 1 and Level 8 in the Second Quest. They can be defeated by slashing one part of their body at a time, until they have finally been reduced to one piece, at which time a final slash will do them in. In the last dungeon of the game, Moldorms are replaced by a tougher enemy known as a Lanmola.

Main article: Moldorm (A Link to the Past)

Moldorm is the boss of the Tower of Hera. Moldorm later appears as a mini-boss in Ganon's Tower.

Moldorm is the Nightmare found within Tail Cave.

In Twilight Princess, a Moldorm is a worm-like enemy that buries itself beneath the desert sand. Its only attack is to leap up and hit Link. To attack, he can use the Clawshot to pull it to the surface and vanquish it with one strike of his sword, or wait for it to jump and use the Mortal Draw Hidden Skill.

Moldorms appear in the Temple of Courage. They move around randomly, occasionally going directly for Link. Three hits to their backside defeats them.

Moldorms in Skyward Sword can be found in the Fire Sanctuary, Sky Keep, and an island in the Thunderhead. After digging underground with his Mogma Mitts, Link can find them crawling around in a continuous circle. If they spot Link, they'll charge at him immediately, causing a small amount of damage. Their backside is their sole weak point.

Four Moldorms appear in A Link Between Worlds. It is first fought as the boss of the Tower of Hera and later appears as a mini-boss of Lorule Castle. Moldorms also appear in the Treacherous Tower, where one Moldorm can be fought on the fifth floor of Beginner Mode and another one encountered on the 50th floor of Advanced Mode.