The Tower of Flames is the third and final stage of Death Mountain. It serves as the level's dungeon and the Green Maiden's prison. 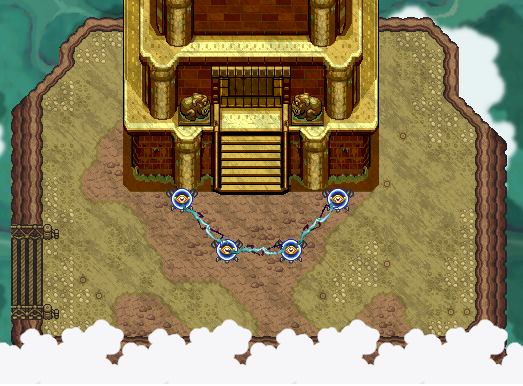 The Goron in the Tower

The Tower of Flames consists of seven floors that the Links must climb. Lava is common, and fire-related traps appear frequently. The tower's only inhabitant is a lone Goron, who climbed to the top in hope of defeating the monsters that have invaded the area.[1] However, he dropped his bombs in the lava. Even so, he explains to the Links how to defeat the Dodongos using the bombs by placing them inside of their mouths when they inhale.[2]

The Tower of Flames possesses very few real enemies. Two Shadow Links are found after ascending one of the staircases, and they use the Pegasus Boots to break the pots there. Hardhat Beetles can also be found early on in the tower. However, there are no other foes aside from the mini-bosses and boss. Instead, there are many traps. Flame geysers are the most common, which both prevent the Links from reaching certain areas until puzzles are solved, or suddenly begin to gush out fire when they come near. Items such as jars, tiles, and even the flame geysers fly at the Links in an attempt to harm them, and Guruguru Bars are located on many floors of the tower.

The inventory items are very standard and are used to solve a variety of puzzles. The Slingshot is the first item found in the temple's entrance room, and the Boomerang is obtained soon after. Roc's Feather is revealed after fighting off an onslaught of flying objects in one room and used to reach a room filled with Guruguru Bars that guard the Bow. The Lamp and Bombs are in the same area, down a hole. The Bombs are required to reach the Blue Bracelet and defeat the boss.

There are two Heart Containers in the tower. The first is found in the fourth room by breaking a pot to reveal a switch that makes the chest container the Heart Container appear. The other is in a room that has many holes, each of which lead to a different pathway. A whole in the left of the room leads to the Heart Container.

The Blue Bracelet is in a chest after using the bombs to explode a hole in the wall on the right side of the room.

The stage's only Small Key is in the same area as the second Heart Container, in a room filled with holes. If Link falls down the right one he eventually reaches it, and it opens up a door in the same room.

In addition to the ones always gained upon completion of a stage, Link can find two extra Force Fairies in the Tower of Flames. One of them is hidden within a pot at the north of a room with many moving platforms. Link can either use the Boomerang to break the pot and bring the fairy toward him, or go one room west and then return after obtaining Roc's Feather to simply jump onto the pot's platform and get the fairy himself. The second the room right after, and it can be reached by breaking the pot it is hiding in with the Boomerang again.

The Ball and Chain Soldier from previous stages returns once again as a mini-boss. However, this time its bail and chain leaves behind trails of fire that the Links must avoid. They can defeat it by getting past its swinging weapon and attacking with the Four Sword. Once it is slain, the flame geysers in the north of the room go out, allowing them to enter the door behind them.

Later in the stage, the Links encounter four Shadow Links in a room filled with lava, moving platforms, and dangerous flame geysers that occasionally spew out fire during the battle. The Shadow Links use bombs to attack, and can change their appearance to look like one of the other colored Links.

The boss of the Tower of Flames is three Dodongos. They wander around the room and open their mouths to inhale before breathing fire at the Links. In order to defeat them, the Links must throw bombs in their mouths while they are inhaling. Each Dodongo takes a different amount of bombs to defeat.

After the Dodongos, the door to the north opens and the Links can enter. The northern passage is blocked by two flame geysers, but they can go to their right to find Kaepora Gaebora. He urgently explains that Hyrule Castle has once again been overtaken by evil, and that they must head their next to rescue another maiden.[3] Once the return to the main room, the geysers are gone and then can head north to find the Green Maiden. She congratulates the Links, saying that they are as brave as the Knights of Hyrule, and she agrees that they must hurry to the castle.[4] She breaks free from her crystal prison and then leads them to Near the Fields.