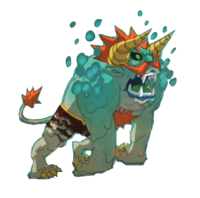 Malladus is the final Boss in Spirit Tracks.

Prior to the time of Link's quest during Spirit Tracks, a battle was fought between the spirits of Hyrule and the Demon King. The Demon King was never destroyed, but rather, was bound by chains and shackles that stretched to the four corners of the land. These barriers that kept the Demon King at bay would later be known as the Spirit Tracks. Furthermore, these Tracks were kept in place by a lock that became the Tower of Spirits. [1] When the Spirit Tracks started disappearing Malladus' seal weakened, and with the help of Chancellor Cole usurping Princess Zelda's body, Malladus was able to become free once again.[2][3][4]

Malladus' spirit appears as a blue skull with red eyes, resembling a Bubble. When he takes over Zelda's body, he appears as a twisted version of Zelda, with pale skin and red eyes. In his demon form, he is a blue horned beast that somewhat resembles Ganon.

Phantom Zelda moving along the train

During the first phase, the goal is to march the Phantom all the way to Malladus at the far end of the train. As Link and the Phantom walk towards Puppet Zelda, Cole will set off various traps to stop them. One of these traps is Cole summoning magical rats that will surround the phantom. Link must slash all the rats away before they can reach the phantom. If they do, Cole will then be able to control the phantom with some magical strings. Link would need to pull out the boomerang and trace a path so the strings can be cut. Keep pressing on with the phantom and keep Link behind the phantom to protect from the lasers that Puppet Zelda shoots out.

After finally reaching Puppet Zelda, trace a path so that the Phantom picks up Puppet Zelda. Link can then walk to the very edge of the train and pull out the Bow. While Malladus and the Phantom are moving through the air, Link can shoot a Light Arrow into Puppet Zelda to finish this phase.

At the beginning of the battle Princess Zelda will need protection from Malladus' attacks. Malladus will shoot out numerous large fireballs, which will become more difficult to deflect over time. The first few will be direct shots that are easy to knock away with the sword, but soon after he will start shooting fireballs that come around from the right or left to hit Zelda.

As the fireballs become a bit more elaborately planned, they are much harder to avoid. Malladus will jump to the left and the right, shooting multiple fireballs out at once. Using the spin attack works well when there are multiple fireballs at once. At the height of this section of the fight, Malladus will shoot four fireballs at once. If Link has the great spin attack, this is precisely the time to use it. If not, he will have to stand as close to Zelda as possible, and perfectly time a spin attack to deflect all four fireballs. This can be quite frustrating and will likely take a lot of trial and error to get the timing down perfectly.

Finishing off Malladus with the sword

Once Princess Zelda has fullly charged up her power, she says she needs to combine her sacred power with power of the Spirit Flute. Princess Zelda will then teach Link a song on the Spirit Flute that goes: Orange, Purple, Yellow, Turquoise, and Orange. There are two jumps between notes in this one, so it can be challenging to learn. Upon successfully playing it, Link and Zelda will be joined by all five Lokomos that we have met earlier in the game. Playing the song reveals a shining weak spot on the back of Malladus.

Link now needs to distract Malladus so that its back is facing Princess Zelda. Princess Zelda will take control of the Bow of Light. Link can run around the area and slash at the legs of Malladus. The top screen will show the over the shoulder view of Princess Zelda. Keep using Link to run around Malladus until there is a clear shot of the weak spot of Malladus. When the cursor on Malladus turns yellow, tap the arrow at the bottom of the screen to deliver a Light Arrow shot. Repeat this process until Malladus has been hit three times, which sends it falling to the floor. Link can then run over and slash at the gem that is on its forehead. After attacking it enough times one of Malladus' horns will fall off.

Malladus is a bit more aggressive once it awakens and will even shoot fireballs out towards Link once again. However, this is a simple repetition of the previous process. After distracting Malladus, Link can deliver another Light Arrow. After Malladus is stunned a second time, sword slashes will cut off his second horn.

Link can repeat this for a third time, which will cause Malladus to fall to the floor once again. At this point Link can run over and jam the sword into the gem on Malladus' forehead. Quickly rub the stylus back and forth as Princess Zelda runs over to help. Together they will deliver the final blow to Malladus.