From Zelda Dungeon Wiki
Jump to navigation Jump to search
Want an adless experience? Log in or Create an account.
Phytops
Cactops 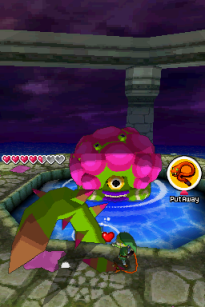 Phytops, Barbed Menace, also known as Cactops, is the Boss of Ocean Temple in Spirit Tracks.

The battle begins with Phytops

The first part of the battle will have Phytops stick out two of its tentacles, which will put a constraint on where Link can go. The body of Phytops, including its eye, is covered by purple goo that is damaging to Link. Link will need to use the whip on one of the tentacles, which will pull out a spike. While holding onto the spike, Link can then launch it at the face of Phytops.

If the spike hits Phytops, it will clear a small area of the purple goo that covers its eye. After two direct hits with thorns, the eye of Phytops will be uncovered. This will allow Link to grab another spike from a tentacle and launch it at the eye of Phytops. Phytops will fall to the ground stunned for a short period of time, leaving its eye vulnerable to further attacks. Link can then run over and slash away at its eye with the sword until Phytops gets back up. 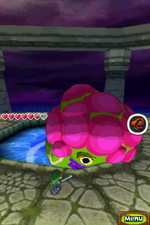 Phytops has one primary attack in this early phase, which is when it shoots purple goo out at Link. However, once Phytops is revived, it will go on a tear with a series of vine whips that are hard to avoid. They are not too damaging though; each hit will take half a heart of damage. After this, the first phase of the battle will repeat. Once Phytops takes enough damage, it will start combining its two phases in one by having all four tentacles in the arena at once. It will use its goo shot, but will also use its vine whip with its two back tentacles. It is hard to avoid the vine whips and the gunk at once, so Link may take a few hits at this part of the battle.

The only other thing that Phytops does differently in the final phase of the battle is that it will rotate around a bit, making it harder for Link to reach the tentacles on the sides. This is just a minor nuisance and the rest of the battle will be just like the previous form. After hitting Phytops in the eye a few more times, the barbed menace will be defeated.