From Zelda Dungeon Wiki
Jump to navigation Jump to search
Want an adless experience? Log in or Create an account.
Fraaz

Fraaz as shown in Spirit Tracks

Fraaz, Master of Icy Fire is the Boss of the Snow Temple in Spirit Tracks. He is similar to Twinrova from Ocarina of Time in utilizing both fire and ice attacks as well as Blaaz from Phantom Hourglass in that he splits into smaller parts and requires the Boomerang to defeat. 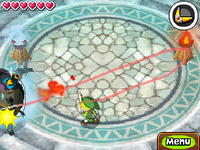 Using the Boomerang and Fire on Fraaz

There are alternating forms of Fraaz as well as two phases. The first form is when Fraaz is together as one large goblin-like creature. Fraaz will suck up energy of either fire or ice, which can easily be distinguished by whether he lights up blue or red. If Fraaz sucks in ice, Link can use the boomerang to target the fire torch and then target Fraaz. If Fraaz sucks in fire, then do the opposite. The boomerang will pick up the flame and then hit Fraaz, causing his body to shrink. If Fraaz has already sucked in a lot of air and his body his huge, then it will take two hits with the other element type to stun Fraaz. Once Fraaz is stunned, Link can run on over and slash away with the sword. Repeat this process until Fraaz separates into two smaller creatures.

This form of Fraaz can be quite annoying. One of the creatures will light up with fire and the other with ice. The goal in this phase is to use the elements against each other. Hit the one of fire with ice, and vice versa. When the creatures stop running, target one of the torches and then glance at the map above. 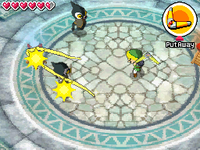 Using the Boomerang and Ice on mini-Fraaz

Each of the separated mini goblins will have a blue or red icon, signifying what element they are. If Link targets the blue flame, then target the creature with the red icon. Once Link has stunned this mini part of Fraaz, he can run over and slash away with the sword. Once one of them is down, the other one might try to revive its partner by using a purple and blog spirit ball. After both have been defeated, they will combine to form the larger Fraaz once again.

Fraaz then gets intelligent and will destroy the two torches that are in the boss arena. During this phase, Link will have to wait for Fraaz to shoot either fire or ice at Link. Whether or not he dodges the attacks, fire or ice will remain on the floor. When Fraaz switches to the opposite element, Link can use the boomerang to target the fire or ice and then hit Fraaz to stun him. Once stunned, he can slash away with the sword. Repeat this process until Fraaz once again breaks until smaller forms.

Since there are no torches, Link will have to wait for the little versions of Fraaz to shoot out either fire or ice. They will leave their mark on the ground, at which Link can use the boomerang once again to grab the fire and ice and hit the respective creature. Link will need to repeat this process until he has hit both of the little creatures. The final phase is a combined Fraaz once again and this time he is more relentless. He shoots out fire and ice even quicker than before and of more amounts! Link will need to repeat the strategies from before to finally defeat Fraaz.