Cado is a character in Breath of the Wild. 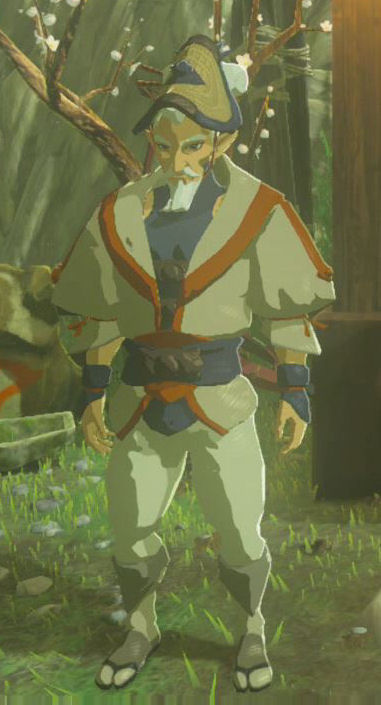 Cado in front of Impa's house.

Cado and Dorian are two of the guards that protect the entrance to Lady Impa's house within Kakariko Village. Cado wears traditional Sheikah clothing and when Link first approaches, Cado initially gives resistance to allowing Link to pass. Upon seeing the Sheikah Slate, Cado realizes who Link is and apologizes.[1][2][3] Cado later tells Link that they are on high alert due to the Yiga Clan recently stirring up trouble.[4][5] Before Link first speaks with Impa, Cado and Dorian will remain on guard 24-hours a day, standing at the base of the staircase in front of Impa's home.

Cado works the night-shift as a guard, beginning at midnight and staying until noon. If it is before 5am in the morning, Cado will tell Link to come back later, as Impa is asleep. He suggests resting in front of the campfire nearby.[6] At 12pm, Cado will leave his post, heading home to check on his cuccos.[7] Here, Link can speak with Cado who is distressed that some of his Cuccos have escaped. This will begin the Flown the Coop quest. After Cado's wife left him, the cuccos were all he had left and pleads to Link to help get them back.[8][9]

After returning all of Cado's Cuccos, he'll be thankful, enjoy watching his Cuccos. He particular enjoys feeling being able to fly while holding a Cucco.[10][11][12]

At 5pm each day, Cado will begin making his way inside of home.[13] He will go to bed, but even while sleeping, all he thinks about is Cuccos.[14] Cado awakes at 11pm to make it for his night shift as a guard, but even then he hates having to leave his Cuccos behind.[15]

Cado estranged wife is Rola, the shop keeper at The Curious Quiver, the arrow shop in town. Rola left him due to his obsession with Cuccos. Although Rola herself is obsessed with archery and wishes that Cado had that same passion.[16][17]

Shortly after 12pm, Cado can be found standing right outside his home, looking at his cuccos. He is saddened that some of them are missing and asks Link for some help.[18][19]

The seven remaining Cuccos are scattered about throughout the village. Each time Link brings one of them back, Cado will give Link an update on how many have returned to him.[20][21][22][23][24][25] After Link is united all then of the Cuccos, Cado will be thankful and will reward Link with a Purple Rupee.[26] [27]