Knucklemaster is a boss in A Link Between Worlds. It is found in the Skull Woods, guarding the Sage Seres' painting. It is basically a living hand inside a steel glove with an eye in the center. 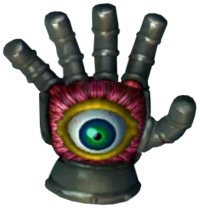 Link faces the Knucklemaster at the middle of a dark corridor at the bottom floor of the Skull Woods. The room has many cracked tiles that fall if stood on too long or when hit by the Knucklemaster. After defeating Knucklemaster, a stairway opens up leading outside where Seres' painting is found.

Its main attack involves clutching into a fist and ramming Link. This attack can only be avoided by jumping out of the way with the Tornado Rod, or turning into a painting. This causes Knucklemaster to hit the wall and get stunned, exposing its eye. After recovering, it will try to fall on Link a few times before returning to its main attack. If the falling attack succeeds, it will not only do a lot of damage, but also destroy parts of the floor, making it harder to maneuver. After taking enough damage, Knucklemaster will get faster and attempt to fall on Link more often, but is still defeated the same way. After defeating Knucklemaster, stairs appear, leading to Seres' painting.