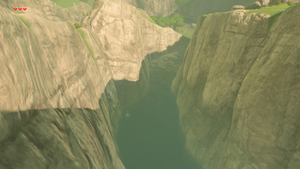 Fir River is a location in Breath of the Wild.

Located just to the east of the Hateno Tower, the Fir River begins flowing from Lake Jarrah. The water flows northward and then westward underneath the Cliffs of Quince before connecting into the Squabble River. This in turn flows in the Hylia River and eventually into Lake Hylia. The river has all the same fish that are found at the origin of the river in Lake Jarrah, including Hyrule Bass, Staminoka Bass, Mighty Carp, and Armored Carp.

Part of the river is blocked off by a large boulder that has fallen down. Water can still flow by, but the rock prevents any travel by Raft. Alongside the shores of Fir River there are some Ore Deposits and Link will also encounter some enemy Blue ChuChu.

Underneath the Cliffs of Quince, right where the Fir and Squabble Rivers meet, there is a Bokoblin camp. There are several Red and Blue Bokoblin and once defeated, a treasure chest will appear that contains an Opal gem.

Shoot the acorn in the tree.

Shoot or bomb the acorn in the tree.