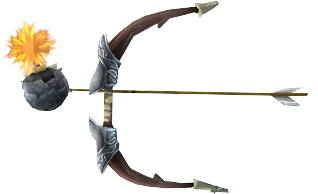 The Bomb Arrow from Twilight Princess

Bomb Arrows are recurring items in The Legend of Zelda series. Link can fire them from his bow to cause large explosions, which can demolish breakable rock barriers. They pack quite a punch too! In most games in which Bomb Arrows appear, Link can combine bombs and arrows to create them.

In Link's Awakening, Link can use a Bomb Arrow by placing Bombs in one item slot and Arrows in the other. Pressing both buttons at the same time will result in Link firing off a Bomb Arrow. They are not required to complete the game.

Bomb Arrows in Twilight Princess are equipped by placing Link's Hero's Bow in any item slot and then opening up his Item Selection Screen and pressing the Z-button when highlighting a Bomb Bag. These explosive projectiles are great for defeating a herd of faraway enemies and blowing up faraway rocks. They are required to complete the game and to get some Heart Pieces. They also still blow up if Link holds them too long.

These Bomb Arrows aren't a combination; this time they are their own item. They work in a very similar way to previous renditions, exploding on target, except they will not work in the rain. Shooting Bomb Arrows while it's raining will make them drop unexploded only if shot from a single-shot bow; if they are otherwise shot from a multi-shot bow under the rain, the bomb arrows will disappear. They are rarely found in chests across the overworld or as a drop from certain enemies. Bomb Arrows are sold at certain stores throughout Hyrule, namely the East Wind general store in Hateno Village, the Slippery Falcon branches in Rito Village and Tarrey Town, Shaillu’s arrow shop at the Kara Kara Oasis, and Gerudo Town’s Arrow Specialty Shop

If used in the Eldin Province, especially in the scorching, volcanic environment of Death Mountain, trying to shoot these arrows will make them immediately explode while in Link's hands, rendering them unusable and damaging Link in the process. Ouch!