Calip is a character found in Breath of the Wild 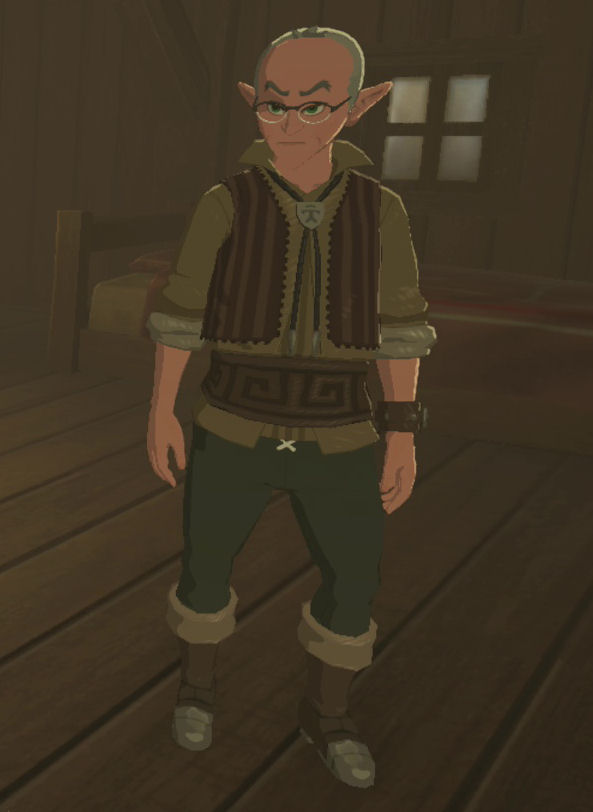 Calip lives in a small cabin just east of Fort Hateno. He is a researcher who spends his nights patrolling back and forth in his home, analyzing ancient texts.[1] He insists that Link refer to him as Doctor Calip, instead of Mr. Calip, as he spent a good deal of his life studying to earn the degree. He often refers to himself in the third person, and thinks of himself as a bit more important than he really is.[2]

Calip spends day and night working, so much so that he never gets time to see his family.[3] He is obsessed with his work that he hasn't even told his family about it. Calip will stay in his house overnight, waiting until 6am in the morning before heading out to do field research.[4]

On rainy days, Calip will remain in his house, as he is worried that the lightning gets attracted to his metallic glasses and it is a safety risk to be outside.[5][6]

During the daytime, Calip will travel east along the pathway and then up north to a small valley with a bunch of stone statues. He only works during the daytime as there are hordes of monsters that roam during the night.[7] Even so, if any enemies pop up, Calip will run away, screaming for help, even after Link has defeated the enemies in the area.[8] Link is able to accompany Calip during the daytime, but he tells Link to try to not get in the way.[9] Calip will occasionally go off on a tangent when talking about his work, even referencing a voodoo doll, before then backtracking, as he believes he is delving into matters too terrifying for the average person.[10]

After talking to Calip, when Link acknowledges that Calip is a Doctor, it certainly changes Calip's demeanor and this will begin The Cursed Statue quest.[11] He will tell Link of a riddle that he is trying to solve, "When a dark light resides in the cursed statue's eyes, pierce its gaze to purge the seal from the shrine.".[12][13]

Calip hints that he thinks that the dark light could just very well be the night light.[14] However, at 5pm each evening, Calip will head back to his house, so he never gets to see the statues during the evening hours.[15]

After completing the quest, Calip is even more confuses as to how the Shrine has suddenly appear, chalking it up to it being a stroke of luck.[16] With the shrine now visible, Calip is continuing his research.[17]